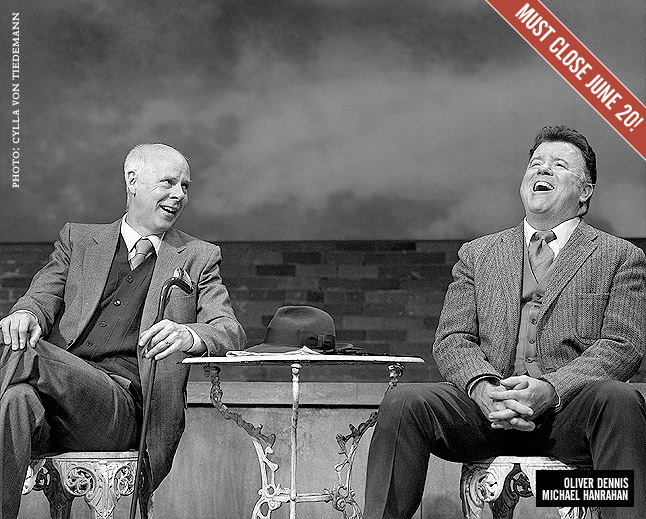 Soulpepper was founded by friends. World-renowned, big-name, highly successful friends, but friends nevertheless. And to this day, Soulpepper is run by friends. You can see it when Albert Schultz knows the name of everyone in the lobby or when Derek Boyes uses his day off from You Can’t Take it With You to watch his friends perform in Home. Even the newbies have caught the thick-as-thieves bug at Soulpepper, never more clear than when academy-alum Ins Choi trusted his soon-to-be smash hit Kim’s Convenience to his old mentors or when Gregory Prest proclaims his everlasting devotion to company matriarch Nancy Palk. That dynamic is one of the many invaluable and inextricable things about Soulpepper. In the program notes for Home, Schultz writes a loving tribute to the company’s steadfast sweetheart Oliver Dennis on the occasion of his 5oth(!) Soulpepper production. I’ve only been on the Soulpepper bandwagon for about a year but I’ve already seen Dennis run the gamut from smitten/brittle parfumerie salesman to guilt-ridden/organ-failing morphine addict and he doesn’t seem like he’s slowing down. None of them do. Not at Soulpepper. Because, as Brenda Robins points out in her Artist’s Note, “they are my friends and I like them”. Simple as that.  There’s something awesome about a company for whom the theatre walls form something “a little like a second home”, so watching Dennis, Robins, Michael Hanrahan and Maria Vacratsis chatter, mutter, limp and twiddle their way through David Storey’s one-act Home is entirely more fascinating than those verbs would suggest.

There’s history in those four actors (who are joined onstage by relative newcomer Andre Sills), backstory, camaraderie. Storey’s script is downright time-wasting if there isn’t some sort of revealing rhythm or chemistry to the interactions. Dennis, in particular, is a master of nuance who seems at all times completely unscripted. The others are all good, but less believably complex as Dennis. But there’s lots of delving. Good delving, not the pretentious “the symbolism is in his hat!” delving. The kind of character delving that comes when rehearsal time doesn’t need to be spent on technique, communication or chemistry. With Schultz directing and a quartet of old friends on stage, Home runs like a well-oiled, slightly oddball machine.

The most interesting detail about Storey as a playwright, in my opinion, is that as a career athlete and aspiring writer, he “only ever really felt comfortable on the train” (program notes, again- these ones were particularly insightful). That sense of world-spanning displacement comes through interestingly in Home. It’s a goofy comedy of words, with the occasional physical gag, but it’s also got a black centre and a strong sense of the absurd. There are times when Home feels like Waiting for Godot, if Waiting for Godot were more entertaining (and there wasn’t all the silly hat symbolism English professors like to latch on to). But when the women enter, Home becomes more of an awkward comedy of manners than an absurdist two-hander. Then the trick-twist of the piece puts its every disjointed bit into perspective in a fascinating way. And while nothing happens, there’s a lot to it.

Home is a piece greatly improved, I think, by knowledge of what you’re seeing. The playwright’s life story, the genres he’s elaborating on, the company history, the cast friendships- they all inform the story of 4 sort-of strangers wandering around and gossiping and complaining and arguing over seating arrangements. There are very few chances left to see Soulpepper’s production (it closes on June 20th), but if you do, you might just see everything hidden inside the talky, slow-moving story of Home.