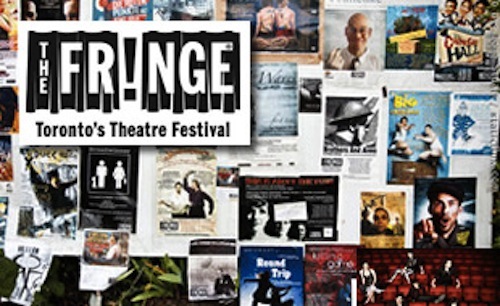 The Toronto Fringe Festival starts today! So, to arm you in your battle against the overwhelming number of options, we thought we’d give you the scoop on some of the productions involving My Theatre favourites (and a couple that just look awesome). Here’s what the actual artists involved have to say about their Fringe shows:

One in a Million (Fringetastic!)

Who Are You?
Shaina Silver-Baird, an actress in One in a Million. [Featured by My Theatre in the review of Romeo and Juliet with Shakespeare in Action, and on the My Theatre Watch List: 18 Under 25)].

What is Your Fringe Play About?
One in a Million (a micro musical) follows the journey of a band of sperm on the quest of a lifetime to reach the one and only egg. The catch, of course, lies in the fact that only one of them will make it. Conflict and hilarity ensue as they fight on, only to find that the one and only egg has two egg handmaidens… who only further complicate the process of natural selection. It is humanity’s smallest and yet most influential life and death story

What Makes it Particularly Awesome?
The amazing cast and artistic team… and sperm choreo. (For more info on the team see the website or press release). [Also in the cast: the amazing, wonderful, beloved David Lopez].

Describe your show in one word.
Micromusical!

Who Are You?
I am Jajube Mandiela, the director of the family-friendly comedy TICK, and this is my first time being featured on My Theatre. [Tick’s lead actress, Jessica Moss, is a My Theatre Award nominee and Two-Time Performer of the Year].

What is Your Fringe Play About?
The play is about ‘Tick’, a 10-year-old girl who is convinced that City Council’s cost saving measures amount to a war on kids. When her local library is slated to be closed, Tick decides to lead a revolution against adult rule!

What Makes it Particularly Awesome?
The sharp & witty writing, super talented cast, and fun array of comedy for all ages! The show has gags, wordplay, pop culture references, physical comedy, and even serious drama mixed in to make the story all the more powerful!

Describe your show in one word.
Revolt!

Who are You?
Hi! I’m Tara Grammy. I’m the performer and co-writer of Mahmoud. The play was born from my experiences as an Iranian-Canadian.

What is Your Fringe Play About?
Mahmoud is about three characters, all of which I play, and how their lives interconnect while living in Toronto. The characters are an aging Iranian engineer-cum-taxi driver, a fabulously gay Spaniard, and an Iranian-Canadian preteen girl.

What Makes it Particularly Awesome?
Three things:
1. The characters. They are larger than life and very lovable. Plus you get to see me play two men!
2. Its universality. The subject matter obviously has Iranian roots, but despite all the Persian humour and culture, the show has very universal themes: immigration, homophobia, and the idea of home.
3. The people involved. Including four-time Dora Winner Soheil Parsa (Modern Times Stage Company) and Omar Hady (Homegrown, SummerWorks).

Describe your show in one word.
Surprising.

Who are You?
I am Scott Dermody, director for Antigone and Co-Founder/ Artistic Producer for Soup Can Theatre. [Soup Can has been nominated for 5 My Theatre Awards and Scott himself has received glowing reviews in Soup Can’s Love is a Poverty You Can Sell and Single Thread’s Much Ado About Nothing].

What is Your Fringe Play About?
We are taking a modern twist on Sophocles’ classic Antigone. The play opens immediately following a war for the city. Creon has come down with an iron fist to restore order and peace, but is defied by Antigone who refuses to comply with a new law. We use images gleaned from the Toronto G20 Summit and Occupy movement to tell a tale of enduring struggle between power and humanity.

What Makes it Particularly Awesome?
Visceral movement sequences including a Braveheart-esque fight.
WWII-era gas masks made to look like modern police riot gear.
Haunting sound and lighting designs within the constraints of Fringe guidelines.

Describe your show in one word.
Occuperific!

The Taming of the Shrew (Shakespeare BASH’d)

Who are You?
My name is James Wallis, founder of Shakespeare BASH’d and starring in The Taming of the Shrew as Petruchio opposite my soon-to-be wife!

What is Your Fringe Play About?
The Taming of the Shrew is the original battle of the sexes! It’s a play about two people meeting in the middle and learning to love each other for who they are.  It also full of incredibly hilarious characters.

What Makes it Particularly Awesome?
Our show is particularly awesome because it is the full story, as written by Shakespeare, performed by energetic and talented performers. Plus, its being staged in a bar,and you can drink a beer while watching the show, and stay at the bar afterwards to continue drinking with our super fun cast.

Describe your show in one word.
Spirited