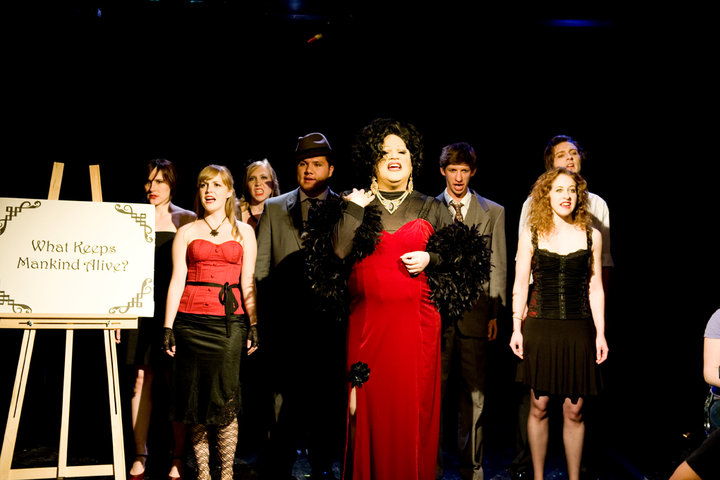 When I was 13 years old I heard a voice like I’d never heard before. I was in the back of the chorus of HMS Pinafore as I listened to the Boatswain sing “For He Is An English Man” in a deep bass full of expression and power. That enormous sound was coming from a skinny 15 year old with funny hair and a quirky demeanor.

That 15 year old would grow up to be one of the most-lauded stars of Love is a Poverty You Can Sell, a recent pick as Best of the Fringe for Toronto’s 2010 festival.

I’ve been a fan of Michael-David Blostein from the very first readthrough of Pinafore, so naturally I had Love, a cabaret tribute to composer Kurt Weill, down on the calendar as a must-see at this year’s Fringe.

Out of town for much of July, I only got to see 2 shows this season (the other being Keir Cutler’s delightful Teaching Shakespeare– the most fun I’ve had at the theatre in years), but opening night of Love was one I was certainly glad to have experienced.

As I thoroughly expected, Michael-David brought down the house with 2 songs from Sweeney Todd, a part he was born to play. Annoyingly, that was where his featured role ended, only gracing the stage for a group number or 2 that would come later on.

Luckily, it’s not as if the rest of the cast were miles behind him. Christian Jeffries turned in the night’s best emotion with contrasting performances, one in a three piece suit and one in full drag (“The Streets of Berlin”- a highlight of the cabaret). While some of the less powerful cast members struggled to be heard over the impressive 10 piece band, strong singers like Arthur Wright and Dayna Chernoff soared beautifully. The inclusion of fun character numbers like “Money Money” and “Class” balanced some of the more drab ballads.

The comical narrators kept the ball rolling and the piece connected. Scott Dermody, in particular, stood out as the lovable foppish sidekick Jodel who takes on an eerily charming devil persona at one point in the story.

In contrast to Dermody’s masterful accent, bits of Ryan Anning’s Hans got lost in translation but he nevertheless guided the audience charmingly through the complexly dark cabaret as the ringleader of sorts.

A breakout production for Soup Can Theatre and the remarkably young cast, Love is a Poverty You Can Sell will play its Best of the Fringe performances Sunday July 18th at 7pm and Wednesday July 21st at 9pm at the Toronto Centre for the Arts Studio Theatre in North York. Tickets are $15 and available online at www.tocentre.com, through Ticketmaster (416-872-1111), or in person at the Toronto Centre for the Arts box office.