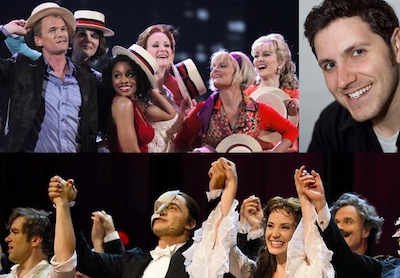 Our Yearly Honorary Award is for an artist whose exceptional work doesn’t fit into the categories of the My Theatre Awards. In the world of theatre, that could be a dramaturg, someone on the tech team or a designer who works in regional or student theatre (the Best Designer category is only in the pro division). But like last year’s winner Rory Kinnear, this year’s winners are theatre performers whom we didn’t see in the theatre.

The increasingly common practice of broadcasting theatre performances (usually from London or New York) to movie theatres across the US and Canada has led to some of the greatest unconventional theatre experiences of the year.

The New York Philharmonic concert version of Company featured an astounding cast of big names, the best of whom were Patti LuPone, Martha Plimpton, Katie Finneran and the great Neil Patrick Harris in that tricky lead role of perennially unmarried Bobby. They barely rehearsed and staged the things as bare-bones as it’ll go and it was still amazing.

The Phantom of the Opera 25th Anniversary Concert at Albert Hall was similarly scaled back from the usual richness of the Phantom design, but it was a fully staged version with a phenomenal cast in awesome roles that are underrated in their complexity.

So the companies of Company and Phantom are our Honorary Winners for 2011, because they didn’t qualify for regular awards but won our love anyway.

New this year to the My Theatre Awards, the Emerging Artist Award is given to one theatre artist- an actor, a director, a designer, a writer- who made a big splash in their first year on our radar.

Prolific director Brett Marks is our Emerging Artist Award Winner for 2011. He directed IDS’s game-changing production of Glengarry Glen Ross by David Mamet before founding his own company, Argos Productions. As Artistic Director, Marks has been ushering new works into production with crucial collaboration from the playwrights, including Argos’ inaugural production, Junkie by John Shea. One play at a time, Brett Marks is carving out a space for new voices on the Boston theatre scene, and we think that’s pretty awesome.