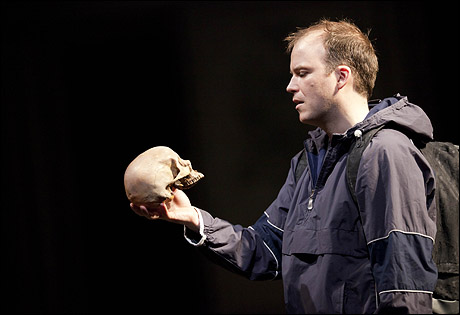 The 2010 My Theatre HONORARY AWARD

It’s time for the 2010 My Theatre Honorary Award. This distinction, announced separately from the rest of the winners, is awarded each year to celebrate standout achievement in any given category. Winners aren’t nominated in the regular My Theatre Awards. Rather, they’re honored separately as the best things that happened in theatre all year (whether they be writers, directors, actors, companies, plays, etc…). This year’s winner is a theatre actor who escaped our regular nominations because we never saw him perform live. Instead, My Theatre got to enjoy this phenomenal performance from the comfort of the Coolidge Corner Theatre in Boston as it was simulcast from the UK National Theatre in London.

This year’s winner is…

As much as I love Shakespeare (which is a lot, I’m not sure if you’ve been paying attention, but it’s a lot), I’ve always considered Hamlet one of the world’s more overrated things. It’s hard for it not to be, considering it’s often lauded as the single greatest thing written in the English language. But I’ve never quite gotten the fascination. It’s long and I’ve always felt that it’s stronger on the page than the stage, if only because I’ve never encountered an actor who can speak for 4 hours straight and come out of it on my good side. It’s also full of allusions in need of footnotes and its title character is a whiny creature who is never quite engaging enough to justify how much of the text he’s given to speak alone.

And then there was Rory Kinnear. I read a review in The Globe and Mail that said “He’s neither the craziest nor sexiest nor angriest Hamlet, but as he speaks the verse with water-clear simplicity, he might be the most believable”. Kinnear isn’t the “most” anything, and that’s what makes him so great. So often, actors confronted with the Everest-like role participate in a Sophie’s choice of adjectives: is he a soldier or a scholar? Noble or cowardly? Honorable or shady? When, in reality, all of us are all of these. Hamlet, in truth, is nothing, more or less, than a guy. And for the first time ever, Rory Kinnear had me on his side. He wasn’t the anything Hamlet, he was the everything Hamlet. He was just there, living it out as if it were happening to him, no pretty gesticulations, verse hammering or cadence caroling. He said the lines exactly as someone would say whatever it was that Hamlet was saying in that moment. And somehow that little act of rebellion changed Hamlet forever for me.

In an interesting, if shaky, directorial product and supported by a truly underwhelming supporting cast, Rory Kinnear had me on the edge of my seat from his very first soliloquy. My love was incalculable by the time he reached his best scene with “Rogue and peasant slave” and I didn’t let go until “the rest is silence”. What happened in between was nothing short of mind-changing.