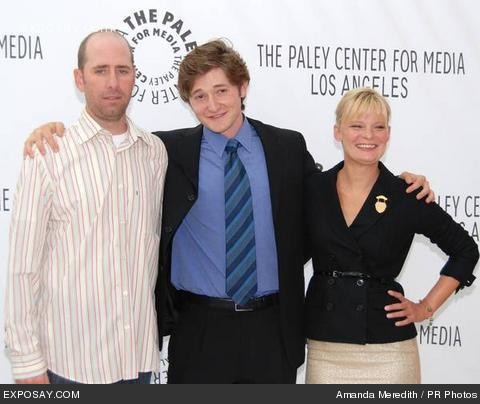 Up next in our 4-part “Talking to Fox” conference call series is Lucas Neff and Greg Garcia from the quirky family comedy Raising Hope.

Executive producer Garcia gives the scoop on the creation of Hope– one of our favourite shows and the first live action sitcom to make it to a second season on FOX since 2007. Lucas Neff, who stars as Jimmy Chance, joins his boss for one of the more entertaining conference interviews of the series.

Here are the highlights:

Making Lemonade
The idea for Raising Hope came from a film that Greg Garcia didn’t know how to end. So when his show My Name is Earl got canceled he decided to turn the Chance family into a TV pitch, so he wouldn’t have to deal with the ending issue for quite some time, if at all. That’s called problem solving, people.

Job Choosing 101
Lucas Neff was asked what attracted him to the role. He answered honestly with “I was really broke and unemployed” then diplomatically with “I’d have been a fool to turn it down… the writing is really good” then oddly with “it just seemed like a wonderful opportunity for me, you know, from the sky”.

From the “Not Actually a Bad Thing” Department
When asked what he and his character Jimmy have in common, Neff replied “I guess, sad to say, I think we both try really hard”. Effort is for the weak! He didn’t actually say that last part, but the absurdity of the statement felt like it fit.

Rich Kids Have Cool Bar Mitzvahs
Apparently the idea to have Youtube sensation Greyson Chance play the young and sensationally talented Jimmy came from Garcia’s son who saw him perform at “one of these insane bar mitzvahs that they seem to have these days around here in an airplane hangar”.

Lucas Neff has a Secret Identity
During a glowing account of Chance’s talents, Neff provided the following little golden tidbit: “His YouTube videos blew my mind, along with all the other teen girls out there”.

Greg Garcia, Proud Papa
After a couple minutes of praising Chance’s abilities as far superior to those of Neff, who plays his older self, Garcia pointed out that the actor was used to playing second fiddle in the Jimmy game:
G. Garcia: “This was nothing new to Lucas. My son plays the four-year-old version of Jimmy, and he’s way more talented than Lucas. So, Lucas has been getting used to this for a while.”
L. Neff: “Yes. Greg’s son likes to say that I play his part.”
G. Garcia: “You play the grown up version, yes.”
L. Neff: “I play the older him.”

Showrunning Apparently Isn’t Time Consuming Enough
Answering a question about Neff’s fairly new twitter account compared to Garcia’s overactive one, Garcia confessed…
G. Garcia: “Well, to be fair to Lucas, I think the cat is kind of out of the bag … Lucas does not involve himself in Twitter at all. That is just me creating a Twitter thing for Lucas. And, then I just Tweet probably the most ridiculous things that I can think of, like tummy aches or ….”
L. Neff: “The most emasculated things he can think of.”
G. Garcia: “And, I just kind of torture him with showing him what I Tweet. So, yes, he doesn’t do anything with Twitter.”

I’ll Take Awkward Questions for 1000 Please Alex…
One reporter asked “You said in a previous interview that playing this role really hadn’t made you want to have a baby yet. Has that changed at all? I mean, are you getting more comfortable with being around a baby every day?”. Poor Neff had to come up with an answer that was sane (“I’m a creature of habit. I spend a lot of time around these babies. So, I would be really surprised and saddened if I wasn’t getting a bit more comfortable.”) and sweet (“Yes, if my kids were like Bailey and Riley, the two girls who play Hope, yes, I would love to have those kids as my children. They’re adorable and happy and playful and curious, all the great things about being human, with not too much of the bad stuff – just mainly smells and odors and things of that nature.”) without being too obvious about how much that question freaked him out (“Yes, I want kids. I don’t know that I’ll ever be ready. But, I’ll certainly want them. I’ll have them regardless of whether I am ready, I think. I just don’t have a time frame on it yet.”).

No Matter How Much Insider Access They’re Granted, Reporters Will Always Believe That Actors Rule the World
Evidence: a reporter asking Neff if he thinks Jimmy will ever end up with Sabrina while the man who actually decides if Jimmy will ever end up with Sabrina listens quietly from elsewhere on the conference call. Neff’s reply: “Well, I think that’s a better question for Greg as he’s the writer”. Duh.

Zing!
“I wish more people loved it. If you look at some of our ratings compared to some of the other comedies on TV, I certainly scratch my head as to why more people watch some of those than ours.”– Greg Garcia on ratings.

Lessons from Raising Hope
When asked if there’s a single moment from the show that he feels really stands out, Neff points to an incident in the pilot episode in which new father Jimmy bungles some basics. “A lot of people talk about the car seat moment in the pilot as being sort of a defining moment for the series as to what the show’s sensibilities are, which is that we’re a family that’s figuring things out. We make some, sometimes, pretty loopy mistakes, like not tying a car seat to the seat. But, everything works out okay, she ends up fine. We learn from it.” It’s all a metaphor people, roll with it.

Stay tuned for parts 2 and 3 of our “Talking with Fox series” featuring the people behind New Girl and Bones. And be sure to check out what Jonah Hill had to say about Allen Gregory in part 1 by clicking HERE.