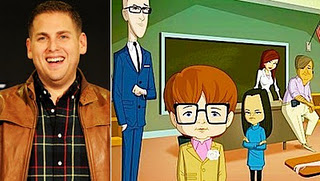 The fall TV season is full of all sorts of thrills, one of which is the plethora of conference calls TV journalists get to participate in with the minds and faces behind some of TV’s best shows. Over the past 2 weeks, FOX has hosted chats with writers, actors and executive producers from some of their biggest hits and most promising new projects.

In our 4-part series “Talking to Fox” we’ll share the scoop from the sets of Allen Gregory, Raising Hope, New Girl and Bones.

Up first is the highlights from our conference call with movie star, writer and comedian Jonah Hill whose new show Allen Gregory premiered last week into FOX’s all-star Sunday night animation lineup. Hill co-created and serves as executive producer of the awesome new show as well as providing the pitch-perfect voice performance for the title character.

Here’s what he had to say:

Jonah Hill: one-note no more
“I strive to have an eclectic career with different kinds of choices and to have Moneyball now and Gregory come out a month apart of each other is a dream situation. They’re so different”

Sometimes funny is enough.
When asked what challenges his privileged character Allen Gregory DeLongpre might go through in public school in light of the current economic situation in the USA (smart questions always come from Reuters, it seems), Hill responded with “I don’t think it correlates to the current economic crisis at all. It’s a really funny cartoon show.” Not that Allen Gregory isn’t incredibly timely and conscious of its climate, but it’s nice to see writers who don’t take themselves too seriously.

Animation: the chance at something new
“Allen Gregory came about because we’re doing animation and … me to play, Andy and I were saying it would be cool to play a seven year old because I couldn’t play that in real life.”

The Rules of Reality and Taboos
“We don’t shy away from anything on the show, but as far as a reality level, even though it’s animated, we don’t describe it a little bit like a spaceship could land there. Like it’s all reality based. Like if it couldn’t happen in real life, then it wouldn’t. That being said, I’ve never heard of a seven year old boy having a relationship with a 70 something year old disgusting woman”

Keeping it Kid-Friendly
Famous for R-rated roles, Hill was asked if it was difficult to keep the language network TV- appropriate for Allen Gregory. After noting that his performance in Moneyballwas 100% profanity-free, Hill responded with a reminder that his character is only seven years old: “I don’t know, it’ not hard at all. When it’s appropriate for … talk how the character is supposed to talk”.

Character Complexity for the Win
The Boston Herald reporter rather dumbly asked why the audience would care about Allen Gregory when he’s condescending and narcissistic (someone clearly didn’t get the show). Hill’s response: “I think the thing that they’ll love about him is he has all this false bravado and condescension and arrogance and everything that’s all covering up the fact that he’s just insecure and wants to be accepted by these people. I think that’s my favorite kind of character to watch is someone who acts like they don’t care about anything, but really cares more than anybody else”. Touche.

Who Wants More of the Same?
In creating Allen Gregory, Hill wasn’t looking to make something that would fit in with FOX’s famous Sunday night animation lineup (alongside The Simpsons and Family Guy). He thinks fans of those shows will appreciate something that’s original, like those shows were when they premiered. “I think you want something different, but that’s why those shows are so successful, because when they came out, they were so different.”

Jonah Hill, On Writing
“Writing it is just improvising that you write down”

How did the show’s animation style come about?
“We wanted the whole show to feel like it was ripped from like the New Yorker”.

The Making of Allen Gregory
“Everything from how a lamp looks to what color someone’s tie should be up to the jokes… Jarred Paul, Andy Mogel and myself and David Goodman who ran Family Guy for a long time, we write the episode and we have a staff and we oversee the animation, the animation company, Bento Box. And it’s such a wonderful process and when I’m off shooting a movie, I’ll write and read scripts at night and give notes and watch cuts and give notes and rewrite and do all that stuff from set.”

TV Networks vs. The Artist, an age-old challenge
“The Challenges are making a creative product within a big corporation that has so much money and time involved in this and fighting to keep your show exactly how you pictured it and so long as that creates a lot of arguments and fighting, but the truth is our partners at FOX have been so great and it’s scary for them to push the envelope like it would be for anyone that’s investing money in something. But for me it was it’s going to be like this or we’re just not going to do it. I’d rather not do it than have it suck.”

Why Allen Gregory is Awesome
“It’s funny. It’s different. There’s not really much more to it. It’s really funny and really strange and unique and cool and unlike anything else on TV and I’m proud of that.”

Stay tuned for all the scoop from our conference calls with the folks from New Girl, Bones and Raising Hope.