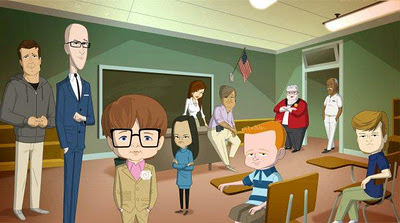 FOX’s newest animation offering is right up my alley. The Jonah Hill-headed Allen Gregory is a quick-witted and sarcastic satire of pretension, a wonderfully clever addition to a Sunday night lineup largely headed by dodo patriarchs.

Hill’s deadpan voice performance in the title role is as close to perfect as animation has gotten since Ellen DeGeneres played Dory in Finding Nemo. He’s cutting, snide and just vulnerable enough beneath all the self-important bravura to make the audience care for him. His random and vicious hatred of his adopted sister Julie, his no-holds-barred love of his elderly principal, his oddly endearing team leader approach to finding friends in elementary school- “we almost did it, didn’t we… take care of yourself, red”, it all plays with just the right amount of dry wit to make Allen Gregory like nothing else in animation.

AG’s 2 fathers are also pretty damn entertaining, though their snide son is clearly the star here. Father #1 is a sort of fancified Dean Pelton with attachment issues, severe passive aggression and financial woes. Father #2 is a handsome house husband who appears to have been kidnapped and held against his will until the Stockholm syndrome kicked in. Julie’s fun too, mostly just quiet and bitter, but a good, plain-spoken foil to the erudite AG.

The jokes threaten to become a bit strained down the road but in the pilot, at least, Jonah Hill’s usual low-brow comedy gives way to a much more literate and nuanced sensibility. Even an easy poop joke is easily elevated by Allen Gregory’s inquiry as to whether the school had a bidet on the premises. Here’s hoping the writers stay innovative and keep the tone of Allen Gregory as fresh as it is in the excellent pilot- a welcome balance in FOX’s broad Sundays.