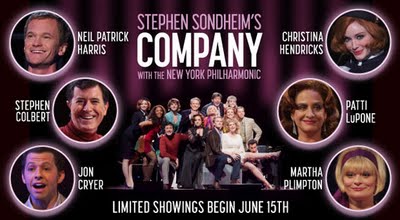 Company at the Cineplex

Company, is a masterpiece in Sondheim’s body of work. The simple story is so nuanced and steeped in human reality that it is actually one of the composer’s most complex works. So when the NY Philharmonic announced that they’d be assembling an all-star cast to take on all the “Sorry/Grateful” contradictions of the piece, I couldn’t have been more thrilled at the prospect of seeing the play tackled by the best of the best (even if it was streamed to a movie theatre instead of live in concert).

With shockingly little rehearsal time and no real dress rehearsal, the company of Company displayed such remarkable talent and professional know-how that their simple (but still very much full) staging appeared polished and easy. And despite a few non-singers in the cast (the delightful Steven Colbert, Jon Cryer and Christina Hendricks- all hired for charisma, comedy chops and star power), the performances were as refined as those of actors given months to tweak.

Leading man Neil Patrick Harris is so endlessly charming that it was immediately apparent how perfect he was for the role of Bobby. It had always seemed outlandish to me that anyone could be lovable enough to have so many wonderful friends, to be chosen as a godfather 7 times, to have choruses of people singing “what would we do without you?”. But with NPH in the role, it began to make sense, his easy charm working opposite every single member of the ensemble cast, creating chemistry wherever he turned. Though his vocals aren’t Raul Esparza quality, NPH’s character sense was so dead on that I didn’t mind one bit. A subtle actor who never completely disappears into his roles, Neil Patrick Harris’s Bobby looked in every way like Neil Patrick Harris but it was in the minute differences- the way he cocked his head, the way he moved his hands, his laugh- that you could see that he wasn’t himself at all. While the occasional Barney Stinson moment did leak through, overall NPH slipped perfectly into Bobby’s skin and led the ensemble with ease.

And what an ensemble that was. I’m completely obsessed with the awesomeness that is Martha Plimpton. A My TV Award nominee in 2010, Plimpton pulls talent after talent out of her bag of tricks and the hilarious triple threat was at her best as Sarah, my favourite of Bobby’s married friends. The adorable Katie Finneran was also spectacular as the frazzled soon-to-be-wed Amy. Her lightning fast delivery of “Getting Married Today” was perfection. Chryssie Whitehead was an adorable but grounded Kathy and Anika Noni Rose was an excellent Marta, absolutely nailing her great solo “Another Hundred People”. As for the men, Craig Bieko never ceases to amaze me with his multitude of talents, Jim Walton made for a surprisingly sweet Larry and I was blown away by Aaron Lazar’s vocals as Paul. Then, of course, there was one Ms. Patti LuPone. Now I’ve always known she’s a Broadway legend (and Rachel Berry won’t let me forget it), but I mostly know LuPone from little things like her outstanding guest role on Ugly Betty as Marc’s mother. It wasn’t until Company that I ever got just how sensational she is. As the tricky Joanne, LuPone laid down a version of the sometimes boring “Ladies Who Lunch” that was completely unforgettable. The woman is a legend, and I now understand the reason.

Here’s to the the NY Philharmonic for thinking to put all those brilliant ingredients into a single recipe, because a piece like Company really does deserve a company that good.