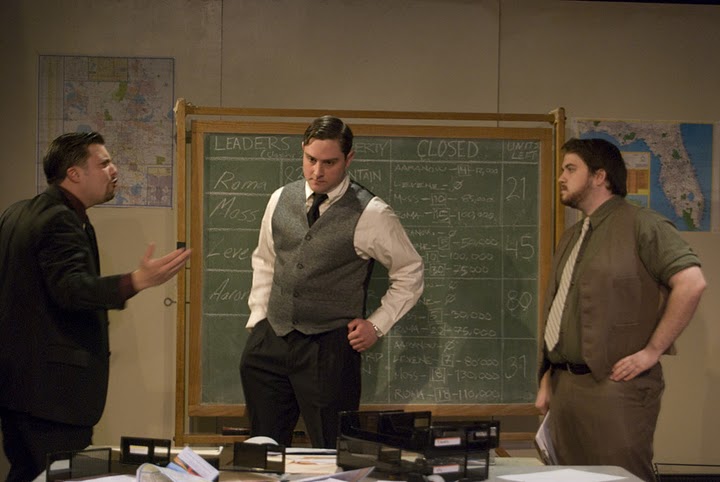 The Independent Drama Society started on shaky ground. Founded by a bunch of BU grads newly ineligible for the theatre groups they’d come to love in college, IDS cobbled together its earliest productions, recruiting inexperienced players and volunteer tech teams to put on plays with few resources and small audiences. The result was some very unbalanced productions. 2009’s Oresteia, for instance, sported two excellent performances from the 21-year-olds playing Orestes and Electra (Nicanor Campos and Sarah Gazdowicz) but the rest of the production left tons to be desired.

In their second season, IDS hurled itself wholeheartedly into the grownup indie theatre scene, raising audition standards and expanding their resources. By the time The Shape of Things went up in the Factory Theatre, the company had managed to pull itself up to professional standards without losing the edgy passion of its founding principles (it had also held onto its best talents while expanding the acting pool). This fall’s Romeo and Juliet made those truths all the more clear. A young but uniformly talented company pulled off a demanding production that not only embraced the company’s desperate passion but actually celebrated it with a relatively low budget romp of good fun with great actors.

But it wasn’t until Glengarry Glen Ross premiered this month at the BCA Plaza Black Box that I fully got the fact that IDS has arrived. I mean, it’s always been here (well, since 2007 it has) but I’ve always thought of it as a sort of College Plus company. The company is still young, but it no longer seems tied to recent graduates the way it has been. Nowadays they’re working with more money, grownup characters, more experienced actors. Glengarry‘s youngest actor, Adam Lauver (23) was one of Romeo and Juliet‘s most mature presences and here shares the stage with a company of honest-to-god adults.  I don’t mean to take away from the company’s other more recent productions (Proof had Mark Bourbeau as Robert and much of the point of Romeo and Juliet was its youthful cast) but the characters in Glengarry aren’t, for the most part, brazen upstarts or foolish youths, they’re worn down, trod upon working stiffs- a show like that isn’t a job for a College Plus company. With Glengarry Glen Ross, in more ways than one, IDS seems to have grown up, or perhaps just grown into itself.

Read on for our review of the production

From the simple but effective lighting design to the detailed set dressing IDS’s Glengarry was spot-on. But as well-executed as the technical and directorial sides of the show were, it was the performances that really stood out. The cast tackled the text brilliantly. In their hands, Mamet’s demanding dialogue (somehow both highly stylized and uniquely realistic) landed perfectly. There was a point late in the first act when Roma made a grand statement, a moment later both he and a fresh-eared audience member simultaneously responded with a thoughtful “huh”. It’s that sort of “right there with you” reactionary instinct that these actors excelled at bringing out in their audience.

The highlights were Jeremy Browne and Michael Fisher. The set up of the BCA black box ensures that certain exchanges are missed by some of the audience. Most of the play somehow avoided that problem for the stage left side where I was sitting. The first scene, however, presented the audience with one of two realities: Williamson or Levene. The stage left side viewed the characters’ dramatic exchange from Shelly Levene’s point of view; we saw the back of his head as he exuberantly pleaded his case to his office manager, John Williamson. Phil Thompson handled this brilliantly and though I didn’t see his face until act two, I understood right away who he was. The trick is, Levene does about 95% of the talking in that first scene. Williamson, in turn, appears to just sit there. The discrepancy is so huge that at intermission my friend profoundly wished we’d sat on the other side, to see Thompson’s performance. But I disagreed. I wouldn’t have traded our angle on Williamson for the world. Levene’s a lot, his desperation is easy to understand from his tone, his hand motions, the way he leans across the table to make a point. Williamson is small, he’s detailed, he’s stoic. Jeremy Browne created a hurricane of complex character minutiae then glossed it over with the composure of someone who’s been compartmentalizing all his life. His Williamson, on about 3 or 4 lines, had me completely captivated. Had we been on the other side, we would have missed an excruciatingly layered performance. In act two, the gloss started to wear, revealing all the neurosis, pride and vulnerability I was so excited to see. In the play’s most subtle but intriguing character, Jeremy Browne stole the show by seeming to do nothing.

Michael Fisher’s Roma, on the other hand, seemed to do a whole lot. Perhaps the story’s most vibrant character, Richard Roma could quickly have slipped into sleazy caricature. He’s sneaky, snarky and loud; he’s competitive; he’s egotistical and he’s ALWAYS closing. He is, in all semblances, not that nice a guy. But in Fisher’s hands, Roma was a lot more complicated than that. The engaging actor mined Mamet’s superb text for all it had, giving Roma as many layers as he could find. Sure, he played the charm, the ambition, even some of the sleaze. But he also found the empathy. Fisher really brought out the moments when Roma is the most sensitive and loyal character on stage. His Roma was as much intelligence and playfulness as he was determination and thoughtless manipulation. His connection to Thompson’s Levene (as well as the other salesmen) was palpable, which made his utter disappointment at the truth even more poignant. Fisher made Roma into more than a salesman or a showman, he made him a human, Mamet’s creation deserves nothing less.

The Independent Drama Society’s production of Glengarry Glen Ross was simply terrific. The whole cast (not just the two standout performers I mentioned but all of them) was extraordinary and the piece was expertly directed by Brett Marks. It made me take IDS more seriously than I’d ever thought to before and made a confirmed Mamet fan out of me. I’d say that’s a win.