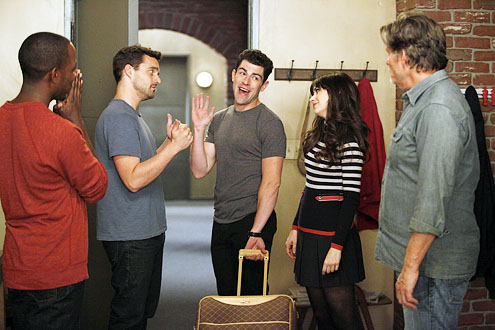 Few things make me grin so widely as Tuesday nights… because I know New Girl is waiting for me on my PVR (rarely do I know when things actually air, PVR/DVR and Tivo are saintly inventions). I love New Girl. I love New Girl like I haven’t loved a season one sitcom since… hold on, I know I know the answer… Community, maybe? But I wasn’t completely in love until early season two; Parks & Rec? No, though my current love for that show knows no bounds, the first 2.5 seasons were mediocre at worst, charming at best, not love-worthy; The Office? Season one carbon-copied the BBC version, season two was their breakout; Big Bang? derivative and broad premiere…. gosh… How I Met Your Mother? I didn’t jump on board in time for season one; Modern Family? Still think it’s overrated…okay, all time best sitcom-FRIENDS? 1994? So was not allowed to watch primetime in 1994. I loved Mr. Sunshine right off the bat… alas, no one agreed and it was gone in record time. I’m giving up, letting Liz Meriwether’s Fox gem reign supreme.

And reign it shall, because the best thing about how wonderful those first few episode of New Girl were is just how much better the subsequent ones have been. As reactions to the quirky, happy show pour in from grumpy hipsters and condescending feminists, New Girl shows them up by being self-aware enough to stay 4 steps ahead of them. The characters- all lovely and well written to start with- are growing all the time, forming more complex relationships and deepening into hilariously familiar human beings who don’t feel like sitcom characters the way most sitcom characters feel like sitcom characters. Their hijinks are a wonderful mixture of the absurd and the mundane and absolutely nothing feels out of character or tone. The allround superb cast gets much of the credit for that, but (with one exception- more on that in a second) I’m giving the majority of the kudos to insightful showrunner Liz Meriwether whose life inspires the series. Like her lead character, Meriwether is joyous and weird and wears those giant glasses that almost no one can pull off without looking like a complete poser (tip: if you bought them in 2011 and still aren’t admitting they’re a character prop more than just nerdy eye-wear, you are fooling yourself). The series was meant to be mainly about Jess and Nick- based on Meriwether’s male best friend- and that reality root is what keeps her series from floating away on Jess’ optimism and singsong voice. The fact that Nick’s pantsuit-wearing girlfriend Julia and Jess’ sardonic model best friend Cece were/are written with as much empathy and fun as Jess is a great testament to Meriwether’s range, maturity and the actually progressive open mind that raises New Girl so far above the heads of the prickly and defensive loudmouths who harangued Jess for her girlish wonder without bothering to listen for her impressive IQ and notable backbone.

Now, enough of my weekly “down with the defensive and condescending feminists!” rant, let’s talk about New Girl‘s best asset. Yes, all the characters are written with thrilling wit and detail, and all the performances bring unique timing to each of those characters as well as fantastic unit chemistry. But there’s one actor who’s taken the excellent scripts and made his character into more than even Meriwether envisioned he could be. Max Greenfield, the always-excellent former star of Veronica Mars and Ugly Betty, has created the role of his career with Schmidt, Jess’ craziest roommate. As originally written (and currently written, at times), Schmidt is a “douche bag”- that’s the joke, that he has recurring douchiness and his friends are trying to beat it out of him. He spends half his time working out, the other half over-confidently chasing women (or, at least he used to, until a certain dream girl started giving him the time of day); he throws money at his problems, spends way too much time grooming, listens to dreadful club music and does the occasional atrocious thing to the English language. But- and here’s the magic trick- Greenfield insisted on playing Schmidt with the least amount of douchiness he could muster. That decision (combined with a helpful backstory about his overweight, overlooked old self) was the key to the Schmidt real-person reality. I have this friend who has, let’s call it “a positive attitude”; it’s the sort of approach to life that I, personally, can quite fathom, the “everything and everybody is great; I can do that; sure, I’ll do this; be the best you can possibly be in every arena in every circumstance all the time” attitude. It sounds annoying, but the result is actually incredibly endearing. Like my friend, Schmidt just wants to make his life as great as he possibly can, so he over-works and over-does and over-controls and the earnestness with which he does it instantly takes away any of the annoyance that comes from being confronted with a person who makes you look like a lazy, defeatist blob in comparison. He’s a little crazy, a little accidentally douchey, but there’s no one more well-intentioned than Schmidt. That’s something he and Jess have in common. He’s her oddball parallel in positive outlook- an effect that just leaves me desperate to tune in next week for another shot of whatever they’re having.

PS: For a great “why on earth not?” New Girl time, CLICK HERE

PPS: Another amazing thing about New Girl: Guest Stars! Including Joey King as a school bully, Rachel Harris as Jess’ hilarious boss and my beloved Dermot Mulroney  as a rich dad who’s into Jess (who else LOVES My Best Friend’s Wedding?… Anyone?… Bueller?)