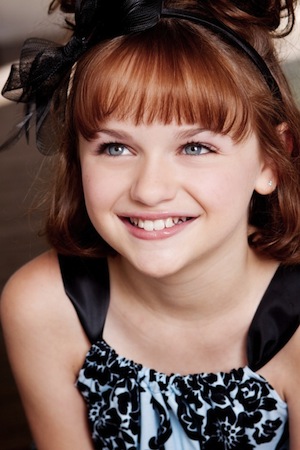 13-year-old Joey King is quickly becoming a very recognizable face in movies and TV. After starring as the titular troublemaker in last year’s Ramona & Beezus (a particular favourite of mine), Joey’s been working non-stop with a turn in last summer’s star-laden success Crazy, Stupid, Love, a midseason NBC show with Amanda Peet and upcoming sure-hit blockbuster film projects like The Dark Knight Rises and Oz: The Great and Powerful.

The enthusiastic actress took the time to speak with me about her breakout year. Here’s what she had to say:

Christopher Nolan’s Batman franchise is one of the biggest in the world, was it intimidating jumping on board for The Dark Knight Rises?

It was so cool, I had an amazing time. I got to travel to places I’d never been to before. Christopher Nolan is so nice, so is Christian Bale. I just had the best time.

What’s your role in that film?

I play young Talia al Ghul. I can’t give too much away because I promised Mr. Nolan I wouldn’t say anything. There are too many secrets about the character and the movie.

You’ve done quite a few films with that big a scope, lots of stunts and extras, things blowing up, is it easy to get somewhat lost in the shuffle?

You know, it’s really really cool doing all those things. In most of my movies I’ve done all my own stunts. You really feel like you’re flying when you’re on a harness. It is easy to get caught up in the scene- when you’re filming a scene with explosions and you’re running away from things and you’re flying on a harness, you think it’s really happening. It’s so much fun… until they yell “CUT”. It’s amazing. I love doing all my own stunts, and I love doing all the flying.

Right now you’re working on the new Oz prequel, who do you play in that?

I play China Girl and Wheelchair Girl. China Girl’s a girl from the book, and Wheelchair girl’s in Kansas- she asks Oz to fix her legs, but he can’t do it. It’s sort of like how in the original Wizard of Oz, Tin Man is one of her friends from Kansas, that’s kind of how this movie is. And I have a really great cast. I’m working with James Franco, Mila Kunis, Michelle Williams, Zach Braff and Rachel Weisz. Sam Raimi’s the director and it’s so much fun. I’m having a lot a lot a lot of fun. China Girl’s really like a sassy character. She’s lost her family so Oz becomes sort of like her adoptive father.

It’s been so awesome. James and Mila and Michelle and Zach- they’re all so nice. And I’m just having an awesome time working with them, they’ve all become great friends of mine.

How’s the prequel reshaping the famous version of The Wizard of Oz?

It’s really cool because I love The Wizard of Oz, it’s an amazing movie, and it’s really cool how now they’re showing the story of how the wizard came to be the wizard and who he meets along the way- how he meets Glinda, how Glinda meets him- he’s not quite sure where he is. Zach, he plays Finley the monkey, it’s just so much fun. I love what they’re doing with the prequel, it’s perfect.

Tell me about Crazy, Stupid, Love– a lot of critics consider it the best romantic comedy in years.

I love Crazy, Stupid, Love, it was so much fun to work on and it’s so funny. It was really cool working with Steve Carell, Ryan Gosling, Emma Stone and Julianne Moore, all those people, they’re so unbelievably nice. It was such a funny cast that I could not stop laughing when we were doing scenes, I couldn’t hold it in.

Do you have any funny stories from the set?

Yeah, in some scenes Steve would ad lib a little bit, he ad libbed his own lines, and I was dying. I was trying to keep my laughs in. It was in the scene where Bernie attacks him and it was just so funny. And Ryan Gosling, he and I were playing trust games and he put his hands down so low so that they were touching the grass and I fell backwards, but he caught me right at the bottom. It was so much fun, but kind of scary though.

He was a child actor too, so did you get any tips from him?

No, he didn’t give me any tips or anything, but we just had so much fun together and everybody was so awesome.

You’ve worked with some pretty big directors, is there a big difference in the experience of making a film director to director (Sam Raimi, Chris Nolan)?

I think there is. Sam is wonderful, he asks us our opinion and I think that’s what it’s really about. He’s so great, he has us work with him and asks us what we think needs to be changed, he likes our input because he wants it to feel real for us. And I didn’t have that much time to work with Christopher Nolan but he’s also brilliant. He picks every detail and that makes it more amazing; he touches on the smallest thing and then it makes a huge difference in the scene. He’s brilliant.

Let’s go back to last year for a second and talk about my favourite of your films, Ramona & Beezus– you were nominated for Best Actress in our yearly My Cinema Awards for that one. Were you familiar with the books before auditioning for the part?

Actually, before I auditioned I had only read one of the books- Ramona Quimby, age 8. But then after I booked the part I read every single book and I loved every single one of them. And after I read them I was just so excited to play this character. Ramona and I are similar and different in some ways. Some of the things she does, I would do, and some I would just say “oh my gosh, I could never do that”. So it was really interesting to play her. She has a great personality and she’s just so cool.

Ramona gets into a lot of fun-looking trouble, what are some of your favourite memories from filming that?

When she starts the water fight scene. That was so awesome. It was just so cool, I love that scene. I think that’s a funny one that she gets in trouble in. And I think it’s also funny when she falls through the ceiling. And, this isn’t really trouble, but it was really cool when she was jumping through the hole in the wall and she has that little sequence. And I love the scene when she’s on the monkey bars. So those were some of my favourite moments- they’re all really funny, and they’re all really cute.

Ginnifer Goodwin who played Aunt Bee and John Corbett who played your dad are longstanding favourites on our site, what was it like working with them? And are they how you pictured the parts?

What about Selena Gomez, did you two bicker like Beezus and Ramona?

No, we don’t bicker. We are really great friends, we are like sisters. Sometimes I still text her. She’s just like one of my big sisters, so it’s really nice to have her around.

Now jumping ahead again, you’re working on Bent for NBC right now, how’s that been?

It’s been really really fun. Yesterday was the last day of filming for the first season. It was so cool working with everybody- Amanda Peet, no nice; David Walton, hilarious and nice. The rest of the cast, Jeffrey Tambor- he is the funniest man on the planet, he’s just so funny. Whenever I was doing scenes with Jeffrey I couldn’t stop laughing. I think I ruined some takes because I was laughing so hard, but I managed to compose myself after a little bit. He’s just hilarious. And the rest of the cast is hilarious. Margo Harshman, everybody. It was so much fun to work on, I’m so sad that it’s over, but hopefully we get picked up again!

Are you enjoying working on TV instead of film?

I love TV and I love film. I’m more into doing film, but I like TV, I like that it’s something new. I really enjoyed myself and I really miss the cast.

Hm. That’s a really really hard one. I like a lot of the roles I’ve done. I love Ramona, I love Katie, I love China Girl, I love everything that I’ve done. And favourite person… I can’t pick a favourite person, that’s just too hard. I’ve worked with too many great people. I don’t think I’ve ever had a bad experience, I just love everyone.

I’ve always wanted to work with Queen Latifah, Drew Barrymore and Sandra Bullock. And I would really love to do a really dramatic movie, something that would be up for an Oscar. I would love to do a movie like that where I might be able to go to the Oscars one time, and maybe even win an Oscar! That’s one of my dreams.

And how’s your life changed since you’ve gotten some of these bigger roles, because you started quite young.

I have been really busy this past year and I’m loving it. 2011 has been awesome. I was working on Family Weekend in January and February, I worked on Batman, I’m working on Oz, I’m working on Bent. I’m just having the best time. And I’m really busy, but I like it. I like working a lot, I like travelling. People always ask me “don’t you get tired?” and I say “No! It’s what I want to do”. I’d be going crazy just sitting here at home, bored out of my mind not working. I love to work, and I would have it no other way.