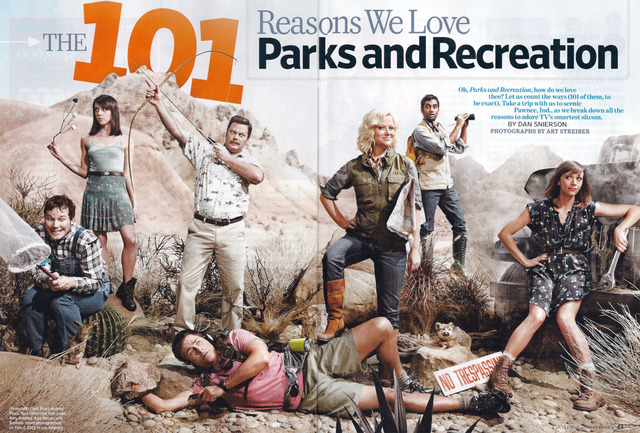 The Best Show on TV

People ask me all the time, if they only have time to watch one show, what’s the best one? For 2 years now I’ve had the same answer- Parks and Recreation. The Big C is stupendous and Parenthood is great, Friday Night Lights just finished an unbelievable run and Community still offers up a transcendent moment of brilliance here and there (as does How I Met Your Mother), but the one show I look forward to most every single week and recommend to everyone I know is the underrated NBC Thursday gem Parks and Rec.

From the wonderfully fleshed-out Tom (Aziz Ansari, the show’s breakout star from season one, who moved seamlessly from annoyingly flashy to hilariously hyperbolic) to the inarguably good yet fantastically hated Jerry (Jim O’Heir). Rob Lowe’s all-out crazy as city manager Chris, Aubrey Plaza’s deadpan April, Nick Offerman’s note-perfect and impossibly unique Ron Swanson, and, of course, my top TV crush, Ben Wyatt (Adam Scott) and his dorky, uncomfortable, pent-up ways- the cleverest sitcom out there has a supporting cast that is impossible to beat.

Fellow My TV writer Rachael and I were talking just the other day about Parks and Rec, her line being that “just when I think it can’t get any better, they make it so much better!”. For example, I was sure there was nowhere to go after the perfection of the Harvest Festival last year, but then I got an entire half season of slow-burn, fantastically real, dancing around the issue from best-couple-ever Ben and Leslie and a surprise Andy-April wedding. And Chris got tendinitis. How do you top a company camping trip? With a battle-of-the-sexes scout troupe retreat. How do you beat an unpredictably psychotic Megan Mullaly as Tammy 2? Bring in a terrifyingly cold Patricia Clarkson as Tammy 1. Tom opened an entertainment company that he drove into the ground with outrageous (or “risky”) spending alongside friend/businesspartner/EduardoSaverinsatire/bestrecurringcharacterever John Ralphio. Chris started dating Jerry’s hot daughter. Andy got promoted. Leslie wrote a book then dealt with the political scandal of where she was born. Ann forced April into a conversation. A cult took over the parks, predicting the end of the world. Tom and Donna celebrated their annual Treat Yourself Day. There was a Model UN! April was the moon.

When Leslie’s dream of running for city council put an end to her gorgeously amazing why-am-I-so-jealous relationship with Ben (technically her boss, so kind of a no-no for election season), I thought: “well, I guess that was fun, now they’ll just pretend it never happened”. Instead, I got two lonely people unable to reconcile the idea that spending time with the person who most makes sense to them means having their stomach tied in knots. The heartbreaking push and pull that marked the beginning of this season between Leslie and Ben was as close to genius relationship writing as I’ve ever seen. They were sad and distant, they descended into psychotic jealousy (okay, that was mostly just Leslie), they tried to be friends, they realized that was too hard, they yelled and screamed and declared war on one another (the Model UN kind- not the actual hurting each other kind). Along the way, passive Ben realized that if he didn’t stand up for himself he would never be able to not hurt, and dominant Leslie finally got called out on her “steamrolling” nature. Their self-preservational decision to not be together drove Leslie and Ben to tear each other apart, however unintentionally. It was brilliantly human. And it was kind of painful. And it was often really really funny- in that “okay, that’s a real thing” kind of way. But without those weeks of knot-tying torment, the show risking accusations of repetitiveness or cheese, last night’s episode-ending “why don’t we just say ‘screw it’?” might have been a stupid TV trick. But after months of watching Leslie and Ben fight to be happy, it was anything but.

If you only have 23 minutes a week, give them to Parks and Recreation.