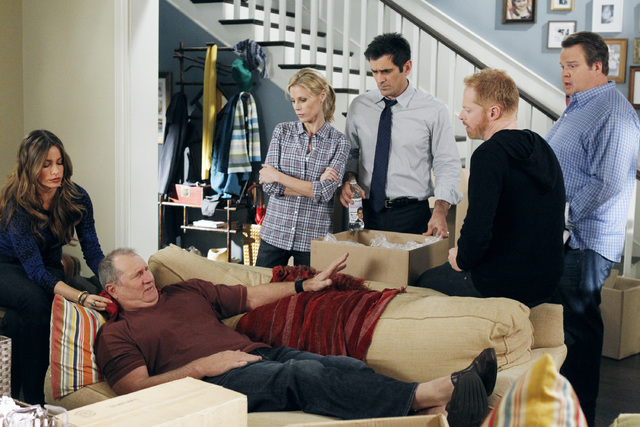 Tonight’s episode of Modern Family was one of the best yet from the Emmy-sweeping series. I’m not usually as enamoured with the show as the rest of the world is (though I’m endlessly grateful that longstanding favourites Ty Burrell and Jesse Tyler Ferguson are finally getting recognition). I always get very frustrated when entire award categories are taken up by a single show; with Modern Family it’s the supporting actor categories where 6 nominees from the show took up more than half the available spots, leaving genius ensemble shows like Community, Parks and Rec and The Big C with no nominations. I don’t mind that it wins awards, in fact I would have voted for Julie Bowen and Ty Burrell myself, but anytime a single show is considered the be-all-and-end-all of quality TV I inevitably hold it against that show, instead of against the critics and awards voters who just aren’t bothering to actually watch other things (the same phenomenon occurred with 30 Rock and Mad Men, 2 shows I wish I could love more). Which is why I’m ever so happy when a truly great episode forces me to love Modern Family as much as everyone else does; it sort of lends weight to their argument, credence to the awards, makes it a little more okay. “After the Fire” was the sort of episode that lifted the series high above its hype by flipping every standard, stereotype and go-to-gag on its head.

The most obvious example was the refreshing take on gay stereotypes in the Cam-Alex-Haley story. Flamboyant former-farmboy Cam makes a huge hullabaloo about his ability to drive a massive truck, the root of his insistence being that he’s sick of living with stereotypes that gay men can’t do macho things. Most shows would make that the story right there (I hate to point fingers but… oh hell, I love to point fingers: Glee! That’s the whole depressing-pretending-to-be-progressive story Glee would tell) but Modern Family didn’t think that was very interesting. So they made Cam actually not be able to drive the truck and they had Haley and Alex assume that he wouldn’t be able to. When Cam makes a fuss about prejudice leaking into the younger generations, the girls point out that that accusation is a cop-out (at least when dealing with these girls, head to some of the stupider states and the story might have been different, but this is Haley and Alex Dunphy we’re talking about). They inform Cam that their assumption about his ability to drive the truck had nothing to do with him being gay (in fact, they know tons of gay people- a point he never seemed to have processed) and everything to do with him being Him. The button of Cam’s assumptions about the gay truck driver they get to help them was the perfect ending to a story that was all about generational differences and the fact that progress isn’t about compensation or thinking the opposite of stereotypes, it’s about not giving two hoots about crap like sexual orientation.

The other flip in the Cam-Alex-Haley story was the single-scene reveal of Alex’s “fans”. All episode (and for 2 and a half seasons previous), Haley had been giving Alex the business on how she dresses and her inability to attract boys. When a gang of highschool nerds are picking on Luke and Manny, Alex comes to the rescue by letting down her hair in front of the boys as they utter “oh my god, it’s Alex Dunphy”. Point being, Alex: “you have your fans, I have mine. And one day your fans will be working for my fans”. Touche.

The last thing in the episode that really struck me was possibly my favourite reversal they’ve done. The breakout character of Phil (Ty Burrell) has always been goofily lovable, a well-intentioned kid at heart who wants nothing more than to be loved (particularly by his father-in-law Jay, who’s given him a hard time since the day they met). His desperate enthusiasm threatened to show up in its most typical (and repetitive) of ways when, during a bad-back-solving massage, Jay lets out an accidental “I love you” then Phil rushes from the room, excited and confused. The reveal that Phil hadn’t even heard Jay and was excited about an offer to join a new real estate firm came as an affirming character moment. As he rationally sought the advice of his successful father-in-law, Phil showed his competent side not just in a comical “I’m a secretly brilliant masseuse” kind of way, but in a “reliable and resourceful father” kind of way. When Jay finally gave him his real seal of approval in telling Phil to bet on himself, Phil didn’t start to cry, he didn’t jump up and down, he just took it like a grownup. The way that story flipped the Modern Family standard-quo on its head to create that surprisingly poignant moment was just the sort of genius I’m always told the show possesses.

And that tag was like a scene out of my own family dinner: everyone is asked what they’d take if they could only rescue one item from a fire. They all pick sentimental material goods and mom (the brilliant Julie Bowen) throws out the cheesy, guilt-trippy “as long as I had my family I wouldn’t need anything else”. Who hasn’t be a part of that scene before? Brilliant. As someone whose own mom always asks for “peace on earth and goodwill towards men” for Christmas, I  was so in on the collective groan that ended the superb episode.