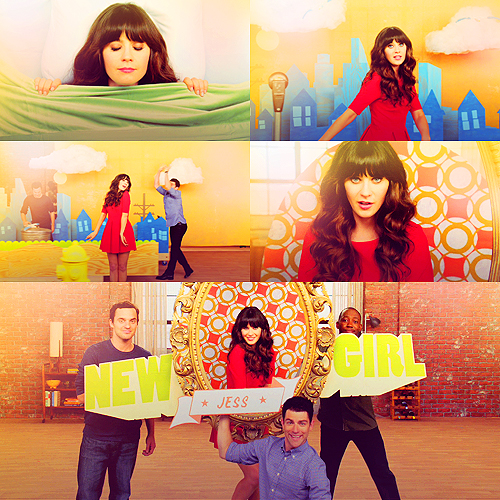 This fall, the networks played host to the strongest crop of new shows in a very long time. There were a couple duds, of course (the sadly still alive Man Up! being the biggest offender) and a couple early-axed favourites (what can I say, I liked The Playboy Club), but so far my favourites are still alive (though for the best new drama, Pan Am, things don’t look too good. More on that later). The best comedy of the season was a surprise for me. I’ve got a lot of new comedy favourites: Up All Night, Suburgatory, Whitney, 2 Broke Girls– all great (yes, I like Whitney, we can talk about this later). But one unexpected show leaped to the front of the pack by its second week and has stayed there ever since: New Girl.

Usually I find super hot chicks playing the awkward card kind of annoying, and Zooey Deschanel’s trademark “adorkable” style can be especially grating. But here, as written by realistic Jess prototype Elizabeth Meriwether, it really works. As Jess, Deschanel reads as nothing but genuine- genuinely odd, genuinely good-natured, genuinely enthusiastic, genuinely unattractively aggravating at times. Her relationship with her model best friend Cece is oddly believable (I especially loved the oh-so-familiar scenes between them in the best-yet episode “Cece Crashes”, written by superb Daily Show/Parks and Rec scribe Rachel Axler), but so much of what I love about New Girl is that it’s essentially a show about having awesome guy friends- my favourite thing (see also my incredible love of My Boys).

Jess’ boys are fantastic (and notably imperfect), my favourite being Schmidt. At first I thought he was a bit much next to Jake Johnson’s cleverly defensive Nick and Lamorne Morris’ quietly fun Winston, but as Max Greenfield unravelled layer after layer of the sometimes-douchebag known as Schmidt, I began to love him for all his absurdity- his desperation for Cece’s attention, his neurotic cleanliness and mad cooking skills, his fancy conditioner, his former-fat-kid insecurities (the most realistic I’ve ever seen on TV, I so know that guy), his fear of birds (I know that one too), the fact that he totally was down to watch Dirty Dancing with Jess, even if he pretended not to be at first. I love all Jess’ boys, but Schmidt’s just a little closer to my heart.

New Girl is really pretty great, something I’m reminded of every time the opening credits play. None of this title card silliness for New Girl, they’ve got a full sequence complete with singer/songwriter/leading lady singing the song her character wrote as her own theme song, backed up by her grumpy roommates whom she’s roped into setting the stage for her song. The boys go along with her silliness, reluctantly, but they still do it, humouring her exactly as they do in every episode. They may be rolling their eyes, but there aren’t a lot of guys who would do it at all, and these guys do, because they love Jess. It’s the perfect intro to a great show.