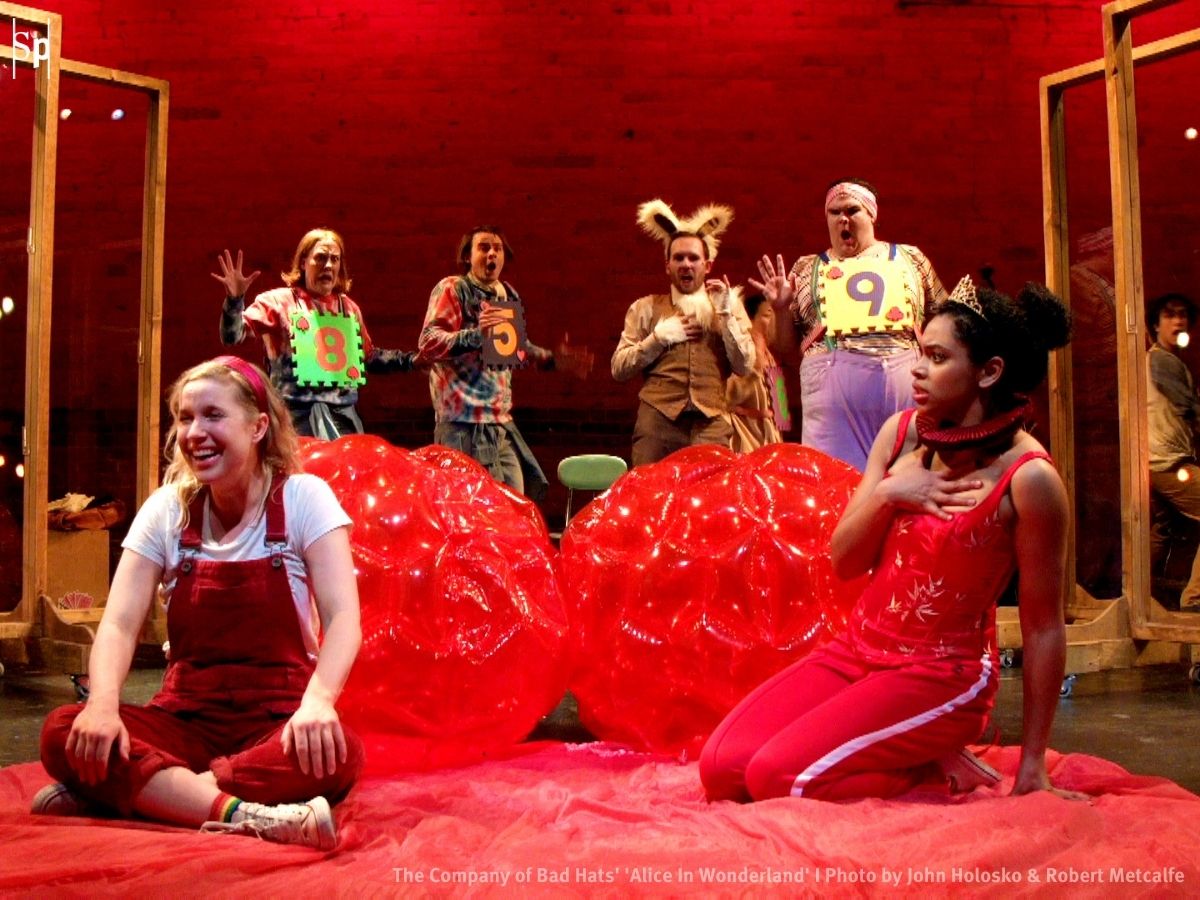 Alice in Wonderland in all of its iterations has primarily focused on Wonderland being a mental representation of Alice and her current situations. Whether it was from the original story about Alice embracing the nonsensical and learning to question, or the American McGee games that took Wonderland and Alice to more mature/darker realms of living with mental trauma, each version brought something different to explore in Wonderland and Alice In Wonderland by Bad Hats Theatre and presented by Soulpepper Theatre takes Alice and Wonderland on a journey of self discovery in a fun family romp with a beautiful message about growing up.

We get to meet Alice as a young student pondering the question of who she wants to be when she grows up when she comes across a familiar rabbit and pocket watch and then it is off to Wonderland where she encounters rules even more stringent than the ones in our world, eccentric characters and a constant exploration of the question WHO WILL I BECOME. It is a story that is heavily supported by the musical elements of the production composed by Landon Doak (who also performs in the show) and Victor Pokinko that keep the narrative action moving along with fun music that effectively emphasizes the messages of the story (i.e a song performed near the end beautifully by Breton Lalama, Tess Benger and Aisha Jarvis perfectly represents the main lesson of the show).

Turning the stage into wonderland itself is no easy feat but the combination of the set design (by Bad Hats Theatre) lighting (by Logan Cracknell and Kara Pankiw) and physical choreography on the part of the performers and director Sue Miner help to track Alice’s journey through Wonderland with clarity and ease using Fiona Sauder‘s (who is also performing in the show) well structured text that gives a clear road map on the story. That being said, the pacing is a bit uneven as the script road map sets apart distinct milestones but not all the milestones are given equal attention and at points I did have to be reminded at which milestone we are at and so left parts of the journey feeling a little rushed.

If there was a singular aspect that really stood out though in this well crafted production, it is the performances. It is a joy to watch actors on stage who genuinely seem like they are having fun on stage telling a story. The show itself also casts each of its performers in multiple roles, but the roles are not random but rather connect to each through shared traits. Each performer brings something special from Fiona Sauder and Landon Doak’s comedic duo playing off each other.  Matt Pilipiak’s getting to play polar opposites as the teacher and rabbit while finding the fun in each role. Tess Benger in the lead role of Alice who brings both heart and humour to the role. Vanessa Sears playing the overachieving student and red queen with confidence and also one of the most fun songs in the show about being a queen. Aisha Jarvis, consistently catching the attention as the Cheshire Cat and brings the character a more warm mentor/guide role for both Alice and the audience. Jessica Gallant, Richard Lam and Breton Lalama have fantastic chemistry during scenes with the three of them working towards the same goal and also get stand out in individual moments such as Breton’s song near the end, Jessica’s heart warming Unicorn moments and Richard’s well paced and funny performance as Dodo. It also helps that all the performers take on musical roles throughout the piece which means that each number truly feels like it moves to the pace and rhythm set by the performers.

If you and your family are looking for a fun, funny and heartwarming piece for this holiday season, then Alice In Wonderland is the show to see. It promotes a great message about growing up and does so with humor, heart and joyful performances. Happy holidays and take this trip to Wonderland!