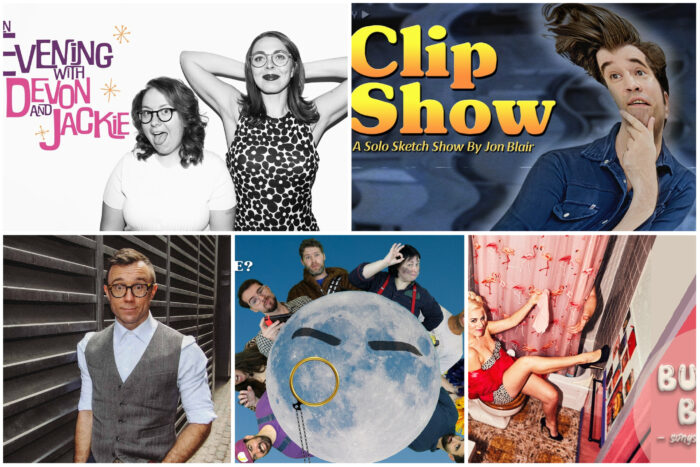 Jon Blair is one of the most creative minds in Canadian comedy. His joyful, thoughtful, outlandish style is so uniquely his own that his solo shows have begun to take on an almost auteurish quality. Building out this latest performance around the idea that he’s trapped in the basement and unable to free himself in time to perform the show we are currently seeing him perform, Blair delivers a delightful mix of signature classics and crazy new concepts complete with a vulnerable third act and meta commentary on the role of vulnerable third acts in contemporary solo comedy.

Bubble Babz: Songs from the Tub (A-)

The songwriting team of Barbara Johnston, Anika Johnson, and Suzy Wilde is a Fringe staple and their pop-y earworms always land their original musicals in the festival’s top tier but it’s nice to see Johnston stepping out with this more personal star vehicle for herself. Bubble Babz is smaller scale than this team’s usual fare, ostensibly a solo show with assists from Masini McDermott and Carter Hayden on backup vocals/providing a few key dialogue moments and Mateo Chavez-Lewis on keys as Babz’s “rubber ducky”, keeping her company during her cherished bath time. The premise appears thin at first but Johnston’s emotional honesty allows the comfort zone setting to serve as a springboard to explore all the issues that come up when you have a moment to yourself.

An Evening with Devon & Jackie (B+)

In their latest sketch show, the artists formally known as TwoSon deliver their usual high standard of sharp and charming wit with fun concepts and nostalgic pop culture commentary. Devon Henderson and Jackie Twomey are my favourite comedy duo in town on a personal taste level; their cultural touchstones are the same as mine and I’m always here for a best friends team. An Evening with Devon & Jackie doesn’t have the connective tissue or inventive structure needed to elevate a sketch show out of “soft B+” territory but their individual sketches are a relatable delight.

Though their show also suffers slightly from a lack of cohesion, the thrill of new discovery elevated this troupe in a festival crowded with really good sketch. The Well Well Wells are a large troupe (eight members!) but I was somehow unfamiliar with all of them and was instantly won over by their balanced approach to ensemble storytelling. Their sketches work with simple, clear concepts executed expertly. There’s nothing groundbreaking about pirate HR or D&D roleplay but observant writing and superb timing made this one of the most consistently enjoyable comedy performances of the festival.

A Small Part of the Whole Story (B)

Live music by Sandro Pehar adds dimension to Chris Graham’s solo show about the loss of his mother. Though the piece as a whole is swiftly structured and well written, it’s the moment when Graham explains the use of music to guide emotional reaction that really stuck with me. Graham is a carefully restrained performer delivering incredibly personal material and the result in general is a feeling of distance between him and his audience, a lack of vulnerability that’s perfectly understandable though perhaps not the most effective of theatrical choices. When he talks about the music, the show briefly becomes less about Graham telling a difficult story and more about the art of telling a difficult story. It feels almost as if a great show is hiding behind this good show, exploring not just what happened but how hard it can be to talk about what happened.