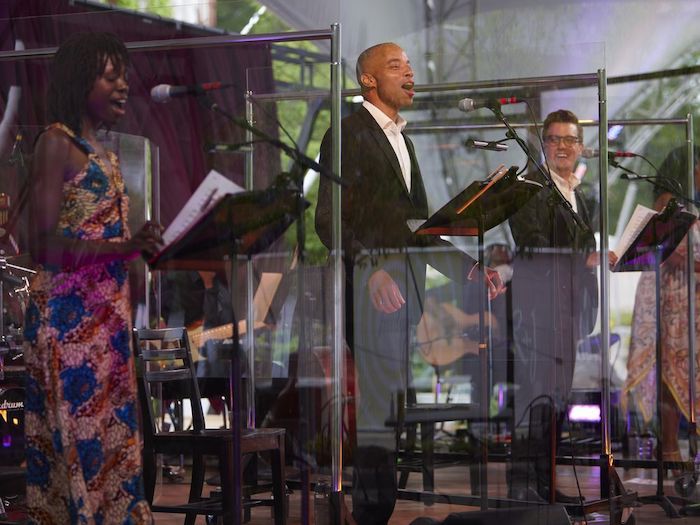 Why We Tell Our Story Cabaret
Marcus Nance absolutely killed it with the curation of this stirring celebration of Black voices. An inspired structure uses the work of iconic Black poets Langston Hughes and Maya Angelou rather than original writing to link together some of the most glorious songs from the musical theatre canon from Porgy & Bess to Hamilton. The combination of the chosen songs and spoken word provide a clear narrative and undeniable emotional journey. The four-person cast is a beautiful balance of contrasting voices who blend perfectly and each singer has their moment to shine (I’m still dreaming of Vanessa Sears singing “I’m Here” from The Color Purple) but it’s Nance himself who shines the brightest, showing off his stunning range as he beautifully rumbles through “Ol’ Man River” and sends “Wheels of a Dream” soaring. I’ve long complained that the Canadian Musical Theatre landscape has failed to give Nance the spotlight he deserves so it’s thrilling to finally see him perform in a real showcase on his own terms.

You Can’t Stop the Beat Cabaret
The comparison to Why We Tell the Story‘s sophisticated construction is what hurts this concert the most. I appreciate the attempt to infuse the pandemic season with some counter-programming fluff but You Can’t Stop the Beat doesn’t come close to capturing the real spirit of musical theatre. On the contrary, it reinforces the worst of the medium- forced banter, broad performances, silly songs; it even falls into the old high school stereotype of three women for every guy (the SATB system exists for a reason!). Though I’m always pleased to listen to pretty voices singing musical theatre (more Mark Uhre please, always), You Can’t Stop the Beat wasn’t nearly the celebration such a complex, joyful medium deserves.

A Midsummer Night’s Dream
There was a lot going on for me with this Dream. On one hand, I didn’t really like it. I found it over-sexualized but never actually sexy and the design confused me at every turn (those fairy puppets were like Lamb Chop nightmare fodder). Amaka Umeh‘s over-the-top Helena seemed to want to explore the character’s no-doesn’t-mean-no dark side but the rest of the production seemed to want to just go with the happy-go-lucky free-love flow. The triple casting was helpful in that it gave every actor multiple shots at a great performance despite the extraordinarily broad direction. Umeh’s irritating Helena was well balanced by their excellent Flute while André Sills took on the only single-role track of the show with Bottom and proved once again that he should be cast in way more comedies. My favourite in the cast was newcomer Jonathan Mason who brought some key humanity to Demetrius without playing against the production’s vaudevillian vibe (he played heartbreak in the first scene when Hermia is sentenced to death which made me realize how insane it is that so few Demetriuses do that) then stole the play-within-the-play as my favourite character Moonshine. On the other hand, even though the production wasn’t my cup of tea, this was the first time in nearly two years that I’ve been able to sit in an audience and watch a Shakespeare play. That is, without exaggeration, my very favourite thing in the whole world. André Sills made me laugh and then I started thinking about the fact that that’s the first time someone has made me laugh by saying words on a stage in 18 months so then I started to cry. So I guess what I’m saying is that I didn’t particularly like this Midsummer but in a different way I loved it.

The Rez Sisters
Solid direction and simple design help focus the sprawling ensemble of characters in Stratford’s tent-bound version of a Tomson Highway classic. The ever-impactful Jani Lauzon and vibrant Kathleen MacLean stand out in an uneven cast, lending their characters helpful specificity and emotional subtlety. However, in a disappointing irony for the woman-centric story, it’s the lone man onstage, Zach Running Coyote as Nanabush, who makes the biggest impact. His wordless, dance-heavy performance elevatingly haunts the majority of the play until he completely takes over the play’s climactic scene with incredible flair. I badly wanted to invest in the story of the Rez Sisters but it’s Nanabush I’ll remember.