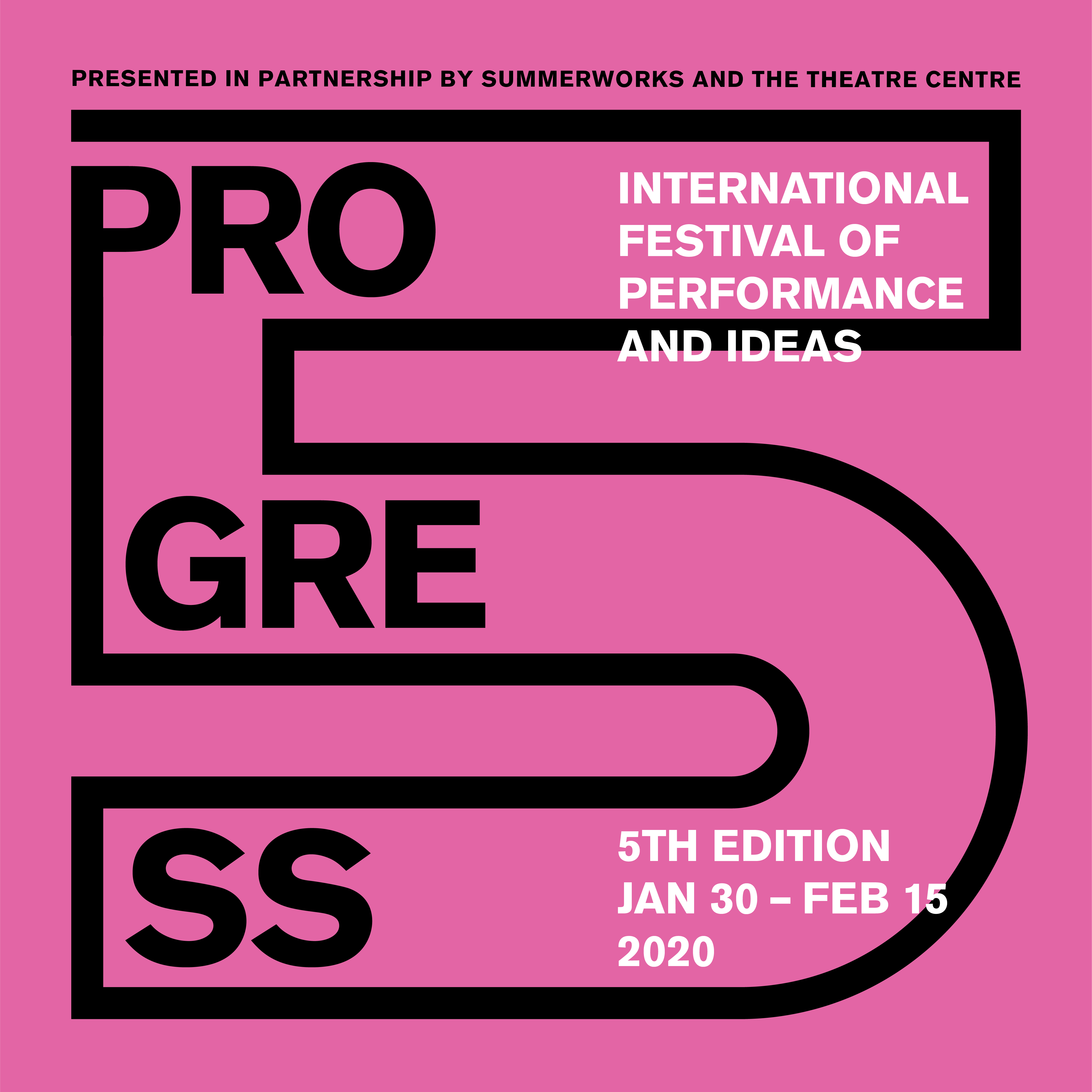 Theatre Centre’s Progress Festival is one of my favourite annual festivals in Toronto. The programming is always sharp and smart, bringing cutting edge international performances to the Queen West theatre. I was only able to see a few shows in this year’s festival; this represents only a sliver of the festival’s programming.

Café Sarajevo is an immersive theatre experience from bluemouth inc. that mixes dance, music, 360° video, and sound together to tell the story of protagonist Lucy Simic traveling to her father’s birthplace, Bosnia. Performed by Mariel Marshall, Peter Musante, Lucy Simic and Stephen O’Connell, they discuss their travels to Bosnia, interviewing people about the Bosnian war, and explore the divide life and culture of Bosnia. Simple actions, like ordering a coffee or singing a song, are put into relief, as Simic and O’Connell go over their conversations and missteps in Bosnia, all through the framework of a live podcast.

The play is a technological feat. The incredible skills of creative technologist Jacob Niedzwiecki and stage manager Gloria Mok, should not be missed. With live music, live mixing, projections, and well as individual VR headsets, and wireless headphones, the immersion into the world of the play is very powerful. The audience experience was truly unique. We are taken ‘backstage’ to the behind the scenes of the imaginary podcast, Café Saraejeo, and move to different corners of the room, as we follow Simic and O’Connell throughout their travels. The set on wheels shifts around and around, and we are invited into the virtual world, back to the podcast frame, and next to provocative dances and performative re-enactments. Their decision to frame the play through a podcast is inspired. They captured the tone of an NPR podcast brilliantly, and it was a useful device to both ground the audience in the story, and provide meta-context and ask questions. One highlight was when they discussed, made, and shared Bosnian coffee. They were only able to share it with a few people, and I think they could have spent more time lingering with the smell of the coffee, the taste (it would be amazing if they could share with the whole audience), and the warmth and difficultly of navigating Bosnian politics.

The show has a relatively short run, so hopefully there will be another chance for Torontoninanss to catch it. It’s too much of a technical feat not to get another run. My only criticism is that the story of the show—while important—was missing some important elements. I never got a sense of who Simic and O’Connell were, and why we were following them on this journey. In their effort to retell this important history, we miss out on the central characters—on who they are, to us and to each other, and why we should care about their journey. I could have done with a little less Foucault and little more character exploration. I wanted more story, and less history, precisely so that the story might help bring the history to the fore, and retrospectively elucidate the aftermath of the Bosnian war. The level of detail, the amount of pure history, becomes somewhat overwhelming without something more tangible to bring us in. Given the level of mediation in the show (headphones, VR headsets, projections), something to help me further connect with the performers would have been appreciated.

THIS WORLD MADE ITSELF / INFINITELY YOURS

This double bill, co-produced by Broadleaf Theatre, created and performed by Miwa Matreyek, is a body/projection piece that explored the environmental crisis, the Anthropocene, and where the world is heading. Each piece lasted roughly 30 mins, and explored contemporary environmental concerns and atrocities through a combination of elaborate projections, animations, and the artist’s shadowed silhouette. Matreyek interacts with the multimedia piece, creating very powerful stage images that critique, comment, and reflect on the environment, and the current state of the world.

Highlights for both pieces are the projection design and the sound design. Especially with Infinitely Yours, the projected animations and videos of the earth, greenery, but also fracking and chicken factories, in consort with the emotive soundtrack, are very powerful. The projection mapping is something of a marvel, as the Matreyek, moves seamless through the piece, her body as shadow-puppet. Her feet, hands, and body take center stage against different projected scenes and scenarios, from idyllic to horrific. One scene was particularly salient: in Infinitely Yours, our mother earth character is transported from factory to factory to factory, where chickens, cows, and pigs are being slaughtered and kept in sickeningly cramped environments. The power of this moment, and its clear critique of the modern industrialized livestock industry, is very affective.

The topic is undeniably crucial. As someone who marched in the Montreal Climate March this past summer with my entire family, the themes of this show are very important to me. If I can offer one criticism, it is in the choice to program these two pieces as a double bill. The shows are very similar in theme and tone, and as such, some of the impact of the piece was lost for me by the time we got to Infinitely Yours, the second show. Each piece doesn’t shy away from disturbing images, depicting landscapes of industrialization which overcome and choke out the natural world. This is an artistic choice, and a powerful one when showcased appropriately. However, there is only so much shock and awe an audience can handle before becoming slightly disconnected, or even jaded, to the images depicted. For me, one piece would have been enough, or perhaps, different pieces on different evenings. As it was, some of the imagery was lost on me. We weren’t given a break or a breath in the entire hour-long performance, which may have been an aesthetic choice, but for me, greatly reduced the potential impact of the powerful images that were showcased.

English artist Scottee has strived to create a space for working class people to talk about class. Meant as something of a companion piece to his show Class, Working Class Dinner Party was a unique performance experience. Scottee and director, Sam Curtis Lindsay, introduced themselves, siting at either end of a long ‘dinner’ table, asking when was the first moment you knew you were working class. Other questions sparked between the two, sharing anecdotes and joys of being working class. Next, the hosts invited 3 people to the table, to reflect further on some of the nuance of working class experience. One participant asked us to socially identify, while others reflected on the intersectionality of class, race and gender, as well as the difficultly of defining working class. At some point, it shifted into the ‘long table’ format, developed by artist and academic Lois Weaver, where audience members may join the table and be part of the conversation. As someone who was raised poor, and yet struggles to truly identify as working class (due to my family’s own history and self-identification), Scottee created very special space. I have never been in a room where questions of class shame, food difficulties, and questions of ‘passing’ in different social environment were discussed so openly. I deeply identified with the stories, anecdotes, and struggles expressed in the room, and around the table, to the point that I was brought to tears multiple times throughout the event. We were able to discuss the difficulties and joy of the working class experience, while simultaneously avoiding romanticizing poverty, and identifying some of key thing we wish would change. The discussion/show ended with the arrival of pizza, and some reflective sentences from our hosts. It was a thoughtful, moving, and nuanced evening of discussion, laughter, and pizza.

As the target audience for this show, I am deeply appreciative to Scottee and Sam for creating a space for this difficult, necessary, and long overdue conversation. Ironically, I am unable to review Class as well, as I’m working! But if the conversation is any indication, it is bound to be as funny as it is thoughtful, and I highly recommend you check it out.