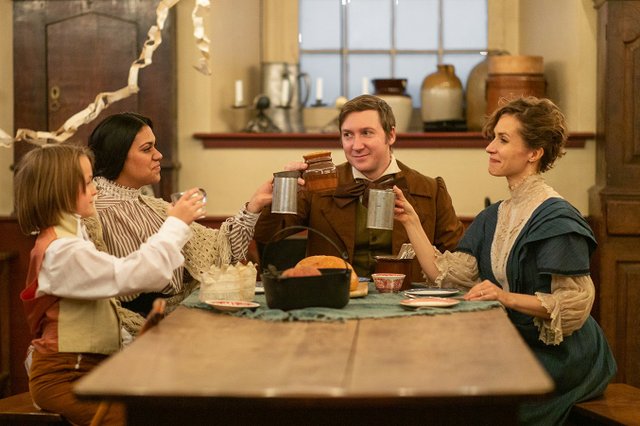 I think I have a new Christmas tradition. I’ve always known the story of A Christmas Carol, but it’s never been a big part of my life. It’s the one with the crotchety old man? Bill Murray was in the movie? In The Three Ships Collective production, however, there are no low blows, and it gets down to the true feeling behind the story, leaving sappy Christmas nonsense at the door. This production is now on my must-do list for the holiday season.

The Three Ships Collective with the support of Soup Can Theatre has staged a truly wonderful show. The direction is creative and insightful, beginning with a note of touching clarity in the programme. The first impactful decision that is so clear is the choice of performance space. The Campbell House, one of the oldest buildings in Toronto, was built in the same era the play was written. You can feel the sense of a Victorian Christmas celebration in the smell of the cooking fire, the vaulted windows and archways, and the hollow echo of the old wooden staircase. As the play is mobile and travels throughout the house, the nature of the evening is casual and intimate. A more perfect setting for a family Christmas play could not exist.

All the actors involved in this performance have done a commendable job. English accents are successful, the relationships between characters flushed out, and the evening works like an oiled machine. I would say so, at two shows a day, six days a week, for three weeks. The energy put into this show is truly marvelous, and while there were a few moments of “over-acting” in the performance I was able to see, I was completely entranced. I would especially like to note the performances of Callum Shoniker, playing little Tim to perfection, as well as Thomas Gough, Ebenezer Scrooge himself. Gough is perfectly miserable, honest and open, and really had my emotions fluttering near the surface in this remount of his Critics’ Pick Award-winning role.

There is nothing I would change about this production of A Christmas Carol. The director, Sarah Thorpe, nails every aspect. The insightful use of the space is enhanced by subtle decisions in the various supernatural effects. The transitions are smooth, the blocking is perfection, and every aspect comes together to create a stunning show. This performance really made me feel the Christmas Joy. Lifted up by the jovial caroling, I couldn’t help but think of the message of love, family, and charity. I can hardly wait ‘till next year so I can come again, and feel myself moved once more.