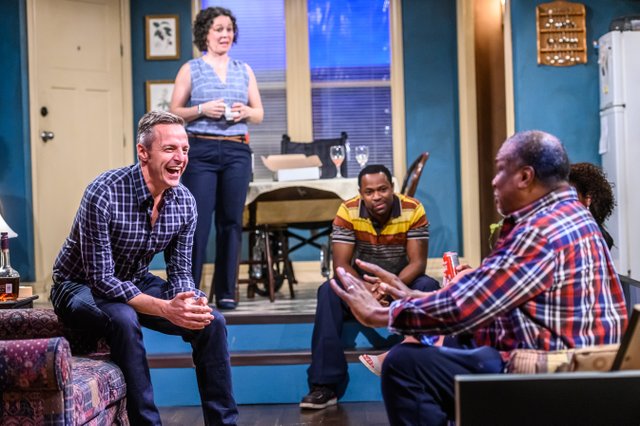 Between Riverside and Crazy at Coal Mine

Coal Mine Theatre debuted with a Stephen Adly Guirgis text back in 2014 and his style of hard-hitting, emotionally complex American drama/black comedy has become something of the house style in the seasons since. Their return to the playwright isn’t as impactful as their debut with a more uneven cast and a less enthralling script but the floor at Coal Mine remains incredibly high.

Indie favourite Claire Armstrong vibes too young for her role as a conflicted detective caught between the department and her mentor while Alexander Thomas feels a little outmatched by the incredible demands of his role as a patriarch trying to get what’s his. Though the accents are all over the place, actors in smaller roles generally fare better with strong turns from Superior Donuts standout Nabil Rajo and Jai Jai Jones as Thomas’ wandering son. Most effective is Sergio Di Zio who starred in that founding Motherfucker with the Hat back in 2014. As a department paper-pusher and ladder climber walking the very thin line between mostly decent guy and out of touch antagonist, Di Zio once again displays his affinity for Guirgis’ tricky language and deft emotional fluidity which shines especially effectively in naturalistic small-space theatre.

Kelli Fox’s direction lacks ingenuity though Anna Treusch’s set design is lavish in specificity, resulting in a straightforward but highly competent production that sinks or swims with the tide of each viewer’s personal reaction to a hit-or-miss text.