On Stage in TO: The Great 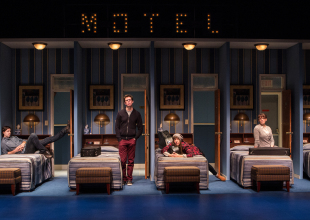 Sextet (Tarragon)
This new theatrical dramedy from Morris Panych is a six-person character piece that plays out almost in real time between three motel rooms occupied by a string sextet on tour during a snow storm. It’s emotionally complex but conceptually simple, a combination that pretty much always reaps great rewards, particularly with a cast as all-star as this one. The most compelling figure- a lonely cellist full of biting wit and unrequited love- is played by one of my favourite actresses in the country, the incomparable Laura Condlln. Her partner in crime is another lonely cellist full of biting wit and unrequited love (though not repetitively so), played by Damien Atkins with heartbreaking candor. A reverential love of classical string music and perfect embodiment of the strange dynamic of a touring company add to the acting excellence and written charm to make Sextet a complete joy. 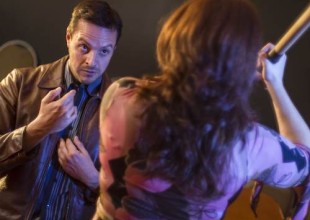 The Motherfucker with the Hat (Bob Kills Theatre/Coal Mine)
The new Coal Mine Theatre is literally the basement of a pizza joint. It’s stuffy, it’s cramped, and a ticket doesn’t come with a voucher for free pizza (which feels like a missed opportunity) but Stephen Adly Guirgis’s rough-edged, fast-paced, character drama- aptly abbreviated as MOFO– feels right at home underground where it’s hot. The richly drawn, hyper-verbal characters embodied by Bob Kills Theatre’s exceptional Toronto premiere cast (best among them, Flashpoint’s Sergio Di Zio as the wounded Jackie) toss off the most foul, most abrasive language this side of Mercury Fur as they desperately search for happiness within an addiction-fueled circle of self-destructive liars. With the exception of audience favourite goofy good guy Julio, there isn’t a soul here who isn’t deeply damaged (and even Julio is navigating some heartbreaking sadness). But even within the wreckage, there isn’t anyone not worth fighting for. A remarkable achievement from a pair of young companies looking to break ground, starting from the basement of a pizza joint. 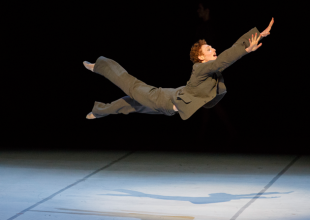 Nijinksy (National Ballet of Canada)
I saw John Neumeier’s contemporary, semi-biography of Vaslav Nijinsky when the National Ballet premiered it last year and have to admit that I didn’t really get it beyond being impressed by the massive stamina and technical proficiency necessary to pull it off. I saw the National’s biggest star Guillaume Coté last time, but I really wanted to see My Theatre Award Best Ballet Performance winner Skylar Campbell dance the role for which he’d been plucked from the corps back in 2013, so I gave the ballet a second try during its current run at the Four Seasons Centre. With a younger, more vulnerable performer in the lead role and a stronger familiarity with Neumeier’s non-linear storytelling and dramatic tonal shifts, I discovered a whole new Nijinsky. The painful beauty of the pas de deux between Vaslav and Serge, the rich metaphors surrounding Romola (the constant allure of dancing with Vaslav’s famous roles rather than the man himself; the desire to confine him to the sled in order to pull him through rather than leave him behind), everything was illuminated my second time through Nijinsky. This is a huge testament to the intellectual and emotional power of Neumeier’s construction and choreography (the more you see it, the more you can see) but also to the remarkable Campbell whose enrapturing portrayal of a dance legend broke open a masterpiece.