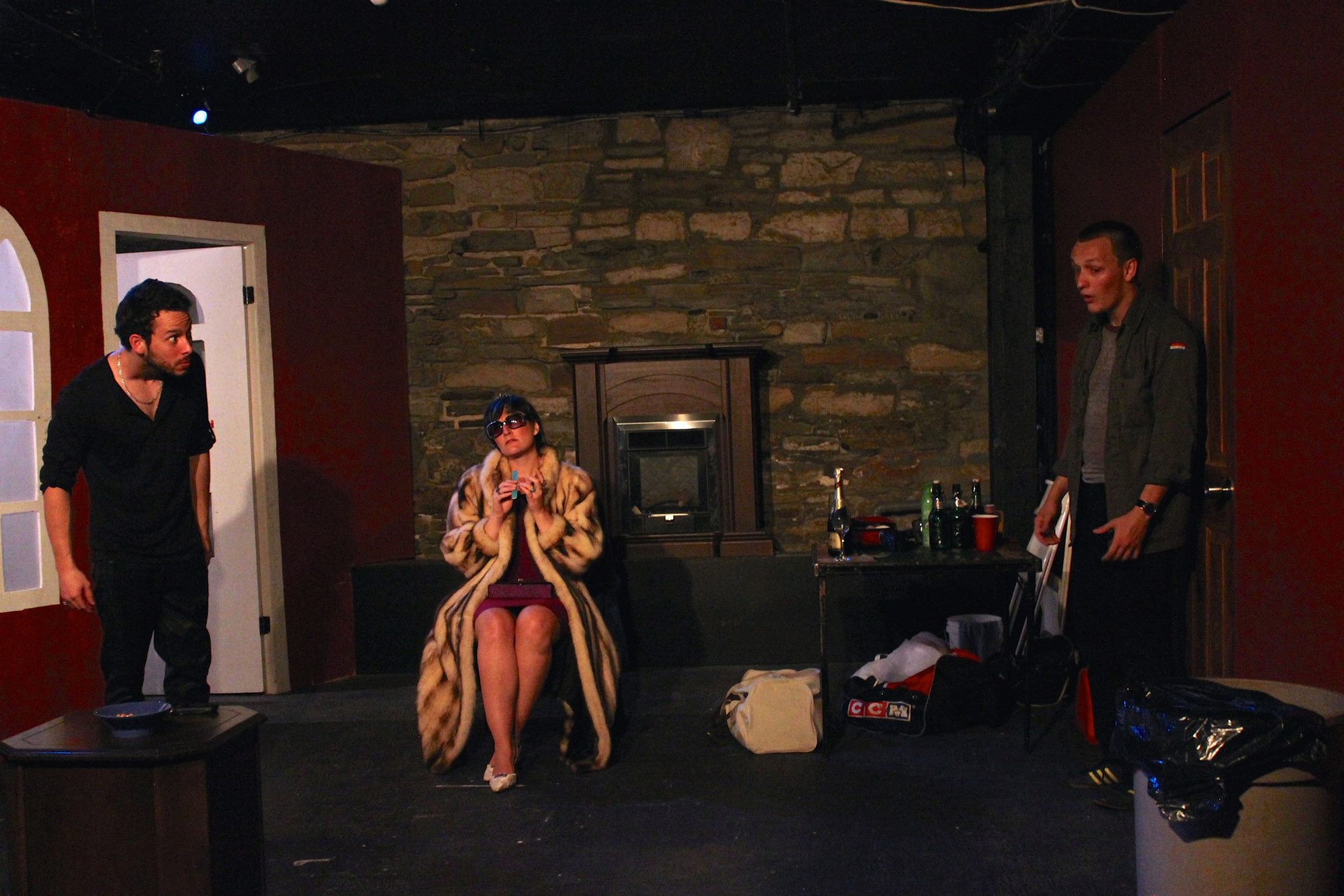 The Conundrum of Mercury Fur

I’ve been thinking about this for a few days now. At first I really didn’t like playwright Philip Ridley’s take on the dystopian future, and that prevented me from particularly liking Seven Siblings’ production of the text, currently playing at Unit 102 Theatre. When Cameron Laurie’s Elliot enters with his goofy brother Darren (Andrew Markowiak) in tow, he spouts off strings of over-the-top profanity that sound uncomfortable and forced at best (I should also point out that the play is clearly originally written for an English company and thus a few choice words in the Canadian production read rather more harshly than they were likely intended to). Instantly I was concerned that Mercury Fur was a little desperate, that Ridley wasn’t imagining the vernacular of the future so much as he was demanding to be called edgy, trying to shock an audience that no longer finds mere Mamet-style f-bombing all that shocking. The plot itself is similarly over-the-top as Elliot and Darren’s wish fulfillment business progresses to their setting up the murder of a young boy on behalf of their paying client (known simply as “the party guest”). There are a number of big twists that don’t have much emotional payoff and Ridley’s most memorable futuristic detail (butterflies are used as drugs now) raises more questions than he bothers to answer. Laurie is an engaging enough leading man and Eric Rich delivers some much-needed humanity as his girlfriend Lola but it appeared that director Will King’s production was being swallowed by a text I just couldn’t muster any interest in (weaker castmembers Markowiak and Adrian Beatty, who have plenty to do in the first half of the play, didn’t help matters).

But then Mishka Thébaud entered as an enigmatic character named Spinx.

On a very basic level, the play gets better with Thébaud’s entrance because he has an incredible stage presence and he just picks up the energy and performance level of the whole cast. His take on the mysterious orchestrator of the night’s sinister business is grounded in a carefully re-written morality, allowing the actor to reveal intriguing shades of immense generosity and compassion while pushing forward the horrors of the plot.  It’s an entrancing performance, and one the production can hang its hat on, but Thébaud’s Spinx also accomplishes something I didn’t expect- he made me reconsider Ridley’s play as a whole and the hour or so of action that comes before his entrance.

The ease with which Thébaud commands the room and makes the aforementioned ridiculous profanity sound natural could cynically be attributed to him just running circles around his fellow actors (it could also be at least in part attributed to the great advantage of his fantastically rich speaking voice) but all signs point to Seven Siblings being the sort of company that wouldn’t let that happen (they were literally founded on a shared dedication to acting technique). Which brings me to the possibility that most of the things that don’t work in the first half of the piece are awkward for a reason. If you were to see the play a second time- revisiting the first half having previously encountered Spinx in the second half (I have to refer to them as halves since the two plus hours of continuous action makes this the longest one act ever)- you might notice that Laurie is actually delivering slower-paced versions of Spinx phrases (as though he’s attempting to mimic him), that the somewhat false bravado he carries in the first half shrinks quickly when a more powerful character enters. Those are really intellectually interesting character details (that Elliot is pre-emptively mirroring a character who exists in the world beyond the play but whom the audience has yet to meet). Unfortunately, if these choices are deliberate, they make Laurie’s leading performance seem weaker than I think it actually is (because they don’t seem deliberate on first glance).

The characters are also not helped by the empathy gap created by Ridley throwing all the character and stakes revelations into the play’s final few minutes. Elliot and Darren share one sequence in the first half where they declare their love for one another in a conveniently quotable chant from their childhood (“I love you so much I could burst into flames” it concludes) but all the action that really defines the relationship happens at the end. The effect is that the audience watches nearly two hours of not particularly likable people doing obviously bad things for what appears to be no particular reason. The final moments of Mercury Fur burst with moral quandary, tragic heroism and devastating humanity and, I’m sure if you were to revisit the play already having seen the end, the first half would be wildly improved by the many production-elevating revelations of the post-Spinx era. But most people will be seeing this play for the first time, so all they will see is a middling dystopia about middling villains that sports one true star turn and suddenly gets good just as it’s about to end.