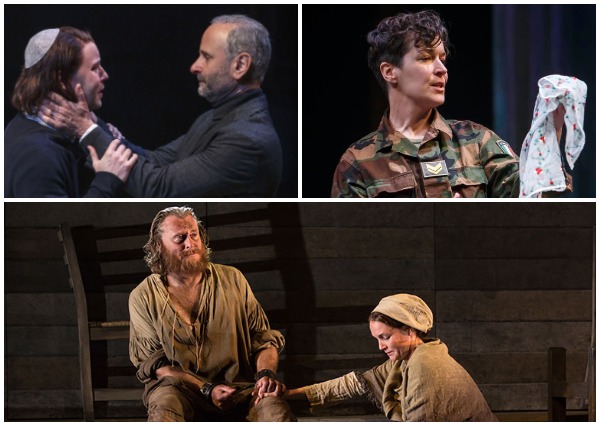 Drama is where the Stratford Festival tends to swing for the fences, doubling down on heavy hitting actors playing incredible tragedy on big stages through brutal runtimes. A sampling of the dramatic plays in the 2019 Stratford season reveals some of the festival’s greatest strengths even as the drama gets harder and harder to witness.

Othello (at the Festival Theatre, directed by Nigel Shawn Williams) is one of my least favourite Shakespeare plays despite it being one of his acknowledged masterpieces. I hate it for the same reason I hate The Crucible (at the Avon Theatre, directed by Jonathan Goad), which is also a masterpiece and you’ll never hear me say otherwise. They’re uncomfortable. They make me feel cold and alone and like the world isn’t a safe place. How upsetting they are is what makes them powerful, it’s what makes them great, and though I know it’s good to put yourself through that sometimes, I found myself in act two of The Crucible thinking it might be best to quit my job and simply run away.

The Crucible, in particular, is a tricky thing to experience in 2019. I call it a Rorschach play, one of those things in which a different audience member will see something different. There’s a way to read Arthur Miller’s anti-McCarthy allegorical tragedy and see it as a dangerous narrative for today’s society. With misogynist incel culture running rampant and #MeToo abusers looking for any way to discredit their accusers, it almost feels unwise to introduce Abigail Williams’ false accusations to their denial toolkit. With the US President calling “witch hunt” at every turn, should we be presenting any evidence against the validity of court proceedings? But turn it around and The Crucible is more relevant now than ever: the rejection of logic in favour of hysterical mob mentality, the persecution of those who refuse to perpetuate a lie, the fates of vulnerable women placed in the hands of unqualified men. Honestly, it’s brutal. Jonathan Goad’s Stratford production is fine- elevated by deeply sympathetic central performances from the ever-reliable Tim Campbell and Shannon Taylor, bogged down by simplistic performances in the sensationalist smaller roles- but one of the things that makes The Crucible even harder to stomach is the looming shadow of the ironically near-perfect Soulpepper production that can and should never be resurrected.

But back to my hatred of Othello, a frustrating play that’s been given a decent production that I think has been a bit over-criticized. My major gripe with this play is the canonical positioning of Othello as a tragic hero when to me he’s a straight up villain from curtain up to curtain down; I tend to think someone capable of smothering their wife with a pillow is likely to smother their wife with a pillow whether they have an all-time villain whispering in their ear or not. Of course, “straight up villain” isn’t a particularly playable interpretation so I’ve never seen anyone play a truly interesting Othello, including Michael Blake who is perfectly fine in the role though I couldn’t name any of his Othello’s traits beyond the obvious (jealousy). I might argue the best thing director Nigel Shawn Williams does with his sparse and perhaps a bit under-directed interpretation is deprioritize the infuriating title character and his dull wife (she doesn’t need to be dull, she just most often is. Frustratingly, Hilary McCormack, the best Desdemona I’ve ever seen, appears as an unnamed soldier in this production, an annoying reminder of what could be). What makes this Othello special is Laura Condlln‘s Emilia, a beautifully fleshed-out portrayal of a usually marginalized character. Here she’s not a handmaiden but a soldier and the chronic abuses of her relationship with Gordon S Miller’s mercurial Iago take centre stage. I’m still thinking about the scene where she hands over Desdemona’s handkerchief in which we see a skeptical, independent Emilia weaken as her withholding husband dangles affection as bait only to flip on a dime the moment she gives him what he wants. It’s a searing a portrait of domestic abuse and a heartbreaking illumination of a confusingly contradictory character. The production as a whole is merely so-so and a great Othello needs more than a great Emilia to succeed but I’m a sucker for a performance that changes my perspective on a character I’ve encountered before and this production gave me that.

The most comprehensively succesful production in this little trio of dramas is the contemporary epic in the studio theatre, Wajdi Mouawad’s Birds of a Kind. A 3 hour+ quadrilingual epic that tackles one of the defining cultural conflicts of our (or any) time through the intimate examination of a single family’s experience, Mouawad’s work is maybe the most ambitious I’ve ever seen at the festival. The cast is almost entirely newcomers (indie favourite Jakob Ehman is busy making a great first impression on the sheltered subscribers who are about 6 years late to the party) and Alon Nashman delivers the performance of his career as a deeply prejudiced man out of touch with himself. Antoni Cimolino’s direction is swift and unobtrusive, facilitating Mouawad’s demanding text as the story shifts between time and space. I knew next to nothing about Birds of a Kind when I walked into the theatre and I think it’s best that you know about the same so I’ll leave it at that. Being in the smallest space, there aren’t a lot of tickets left so this is most definitely my pick of the season for a Toronto remount. Who’s got Brendan Healy’s number at CanStage?