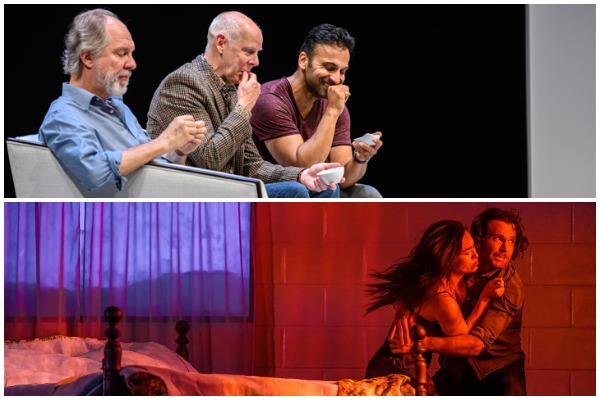 Fool for Love, helmed by reigning Critics’ Pick Award Outstanding Director Frank Cox-O’Connell, plays with Shepard’s usual broad archetypes to make metaphors out of his frustrating characters and their very dramatic problems. Leading lady Cara Gee is an Indigenous woman, a detail which lends her character a depth and history that the play doesn’t quite support. In her artist’s note, Gee suggests a metaphor of decolonization as a lens through which to better understand Shepard’s story but suggestions like that always feel to me like subtextual calls for new plays about underrepresented voices so we can stop looking for more in the old stuff than was ever really there. Simon Rossiter’s lighting design is thrilling and I appreciate Cox-O’Connell’s earnest attempt to illuminate the text with a new perspective but, especially as played by two film actors who resort to yelling to fill the not-all-that-big Michael Young Theatre, Fool for Love feels ultimately like little more than romantic melodrama, the familiar push-and-pull of a couple drawn together because they’ve always been together, darkened with dramatic twists and a toxic masculinity so often confused for passion.

‘Art’, in contrast, is unassuming and all the more impactful for it. Billed as a comedy, directed (by Philip Akin) with simplicity, and designed (by Gillian Gallow, Dana Osborne, Bonnie Beecher, and Thomas Ryder Payne) with restraint, ‘Art’ doesn’t impose its simmering tragedy and heart-wrenching honesty on the audience but rather allows the audience to see what they will in the piece. Casting Soulpepper staples Diego Matamoros and Oliver Dennis against type alongside newcomer Huse Madhavji, Akin highlights the empathetic equality of Yasmina Reza’s brilliant script (translated by Christopher Hampton)- a sharp satire that refuses to mock any of its characters, three contrasting points of view expressed and supported and criticized to allow room for the audience to identify with anyone and switch sides as their minds are changed. ‘Art’ looks unflinchingly at two themes that are of endless interest to me: the subjective interpretation of art and the complexity of adult friendships. Reza uses the former as a gateway to the latter, unpacking decades of suppressed resentments, toxic power dynamics, and death by a thousand small judgements through the inciting incident of a dermatologist spending a lot of money on a painting his friend doesn’t “get”. At its lowest points, ‘Art’ is a charming piece of theatre; at its highest points, it felt like Reza was reaching into me and pulling out every insecurity and fear and failure of kindness to put them on display for the rest of the audience to scrutinize. It hurt in the way great theatre can while the person beside me laughed happily at the light comedy of it all. There’s something about both those things being an option that made ‘Art’ really sing.