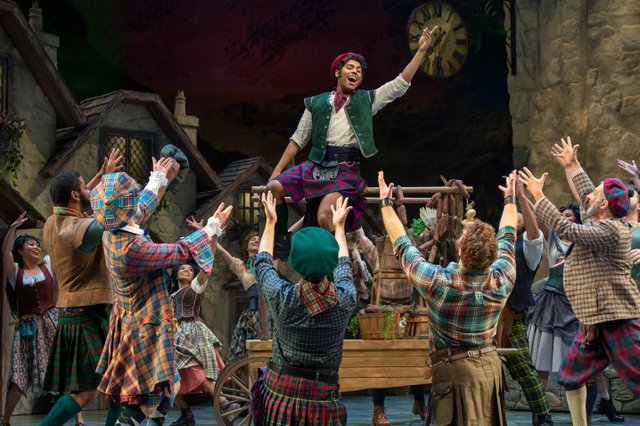 This show hit me straight in the heart. It’s been so long since I’ve been able to say that about a Shaw musical and I’m grinning ear to ear to be able to say it now (also because I literally just left the theatre so the post-musical glow has yet to wear off).

Loewe’s love ballads are pretty, soaring things sung particularly beautifully by this wonderful cast (where did George Krissa come from?! I’m head over heels) but the real magic of this production is in the treatment of Lerner’s work. In 2014, Chicago’s Goodman Theatre produced a new version of Lerner & Loewe’s 1947 classic with a revised book by great Canadian musical writer Brian Hill (Aside: how is it possible that neither major Canadian festival, both of which have been struggling greatly with musical selection of late and/or for forever, has programmed a Bartram & Hill musical?). The Shaw Festival production of Brigadoon uses Hill’s new book. This is a game-changer, a thoughtful, respectfully executed move that opens up a world of possibilities for musical theatre production.

For a host of reasons all of which make me mad, large theatre companies are incredibly gun shy about producing musicals that are less than 40 years old. The problem with that is that there are like 3 musicals written before 1980 that have books that stand up to contemporary storytelling standards without being intensely problematic in some way or another. The result has been mediocre, dated work year after year regardless of the talent involved in the production (the Shaw Festival has a fabulous stable of musical actors, including total superstar Matt Nethersole and personal favourites Jenny L Wright, Patty Jamieson, Kelly Wong and Kristi Frank, all of whom appear here alongside standout Stratford imports Michael Therriault, Mike Nadajewski and Alexis Gordon). But it feels like such a shame to say we ought to just throw out all the classics; imagine never hearing “People Will Say We’re in Love” again on account of Oklahoma’s atrocious final act. Allowing a contemporary revision of the book can deepen existing work and allow for its life to continue in the decades to come. What Hill is able to do with just a few small tweaks to Brigadoon’s backstory and a punch-up of dated dialogue is incredible. He makes the trivial feel grounded and resonant, undercuts some of the awkward patriarchy built into any musical of that age, and sharpens any words that have been dulled by time.