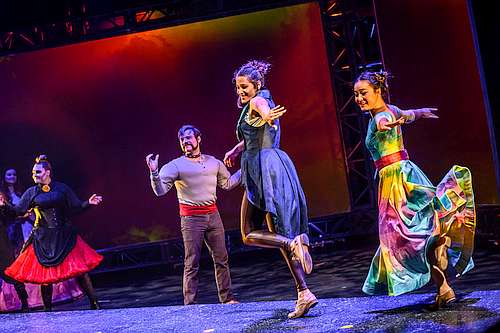 I spent an amazingly mind-bending and eye-opening evening at the performance of The Black Drum at the Young Centre for the Performing Arts. Performed by the Deaf Culture Centre with a tight cast of ten, the show was intriguing, exciting, and such a wonderful way for Deaf Culture to flourish.

After a lovely stroll through summertime Distillery District (despite waiting in line at Soma as two ladies tried basically all the gelato flavours), I was settled into my seat in one of the theatres in the Soulpepper space watching the audience. I usually like to crowd-gaze for a little, to get a vibe from the audience. Excitement levels, intrigue, boredom, they all make an impact on how a show is received. In this case, I was enthralled. I watched as a mostly non-verbal crowd greeted each other, children skittered in the aisles, and I made friends with my neighbours. I watched as people conversed using many varieties of ASL, and knew that the performance would be an interesting experience.

The Black Drum is a Deaf Culture musical, and explores what Signed Music is, could be, and means to those that are involved in its creation. The storyline of the performance does get a little muddled for non-ASL audiences, but there is aid from a narrative voice-over during most scene changes. Watching this show was so radical to me, and I am so grateful for the opportunity. It made me think about the interaction between ASL, music, and especially dance. So much of modern dance is expanded from smaller gestures, and the possibilities for incorporating ASL poetry into modern dance movement is explosive. It was also intriguing to watch the performers in their solo pieces, where an ASL gesture for a word expanded in fluidity and space, much like a singer would hold a note with vibrato or change the note while singing a single word. The concept and exploration of the show is stunning, and is an interesting standing point for Deaf Culture performers to keep working from.

The set and production design on The Black Drum were interesting, helpful, and essential to communicating the story. What was most stunning was the sound. In order to specifically explore Signed Music, the show’s score was a single musician playing a booming drum. The vibrations led the performers through their timing, and variations in rhythm cued changes. It was especially striking when Bob Hiltermann, one of the performers, brought a drum onto the stage with his character. He absolutely shone in his role as The Minister, and his physicality was strengthened further by driving the percussion.

It was such a joy for me to see The Black Drum. I saw new and talented artists of a variety of ages working their craft, and was allowed an insight into a culture I have not so far been familiar with. I was lifted and engaged, and filled with light and hope after this show, knowing there is so much wonderful work coming from the Deaf Culture Centre and many other companies.