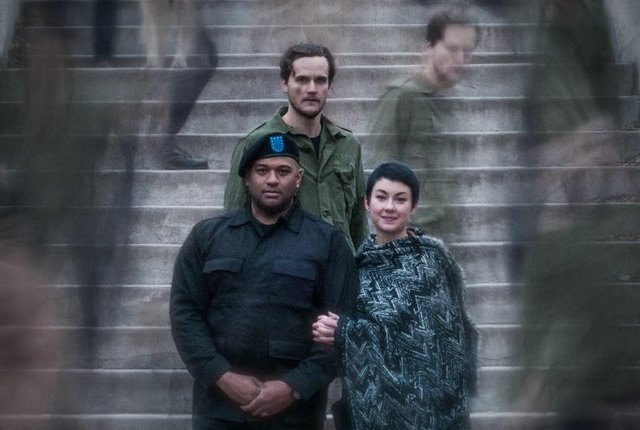 Many Shakespeare plays present an imposing barrier to entry even for educated audiences. Directors devise increasingly inventive ways to make them accessible or relevant – or at least to have their own fun and leave their own mark on the work in the guise of doing this. Othello weds a simple plot, touching on familiar themes of love, jealousy, and doubt, with a distressing display of otherness that resonates with audiences in different ways. Director James Wallis also characterizes Othello as part of an experimental phase for Shakespeare, in which unconventional characters like the eponymous general receive richer and more nuanced development. The result is a work that needs no dressing up or down to capture interest.

Given this, it would seem easy for productions of Othello to blur together; despite this, Shakespeare BASH’d instils their minimalist version of the tragedy with a distinctive and delightful character. Credit here belongs to the cast, an ensemble in the truest sense. James Graham’s Iago has the destructive charisma he needs to weave his web of lies without verging on a psychopathy that removes the mystery around his intentions and renders him less interesting. Catherine Rainville’s Desdemona is not the flawless, fragile thing Othello once saw her as but a self-aware and kind soul in a world confused and scared by that. For his part, E.B. Smith offers a compelling contrast between an imperious, confident Othello at his best and a vengeful, paranoid Othello at his worst, though we only get a glimpse of the tender, loving Othello smothered by his other selves; Iago drawing out Othello’s dark side and making it consume him is a much scarier achievement if that side of his personality is dormant rather than the default. Producer Julia Nish-Lapidus is perfectly professional and unprofessional respectively in the sadly too rare Duchess/Clown double bill.

The setting of the Monarch Tavern also does important work. The familiarity and intimacy that makes Iago’s confessional style so effective extends to the entire production; Desdemona’s arguments with Othello or sessions with Emilia now assume a voyeuristic quality as the audience becomes a swarm of flies on the wall. When Iago gestures at a “flock of drunkards”, he could easily be throwing shade (…or some Elizabethan equivalent) at viewers packed onto benches and bar-stools; and when a fleeing Roderigo flops behind a nearby pillar, you worry that you will be caught along with him.

The production’s short run and long waitlist mean that few Shakespeare fans will have had the chance to enjoy it, but those who did will wait eagerly for Shakespeare BASH’d to return for the rest of their season.