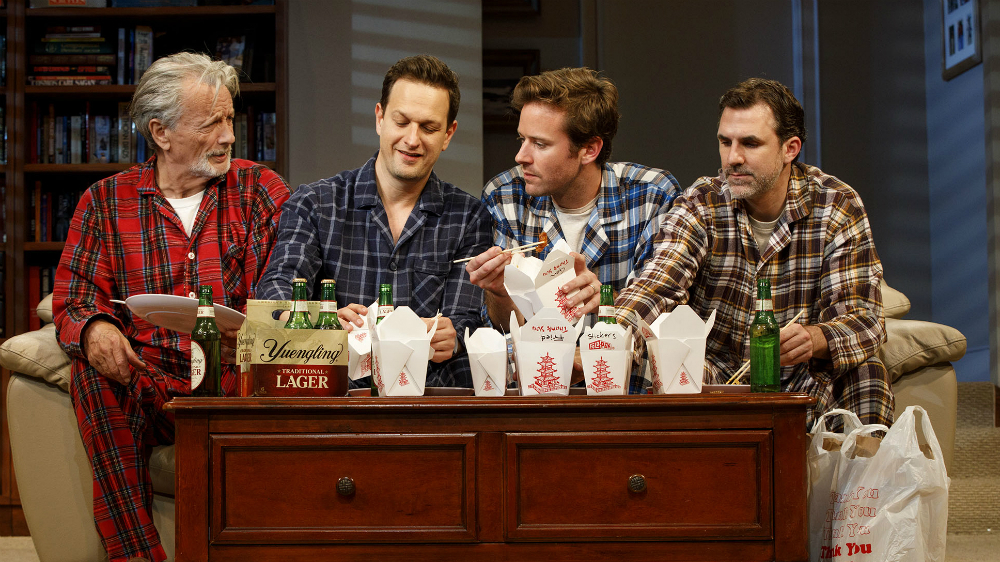 Over the course of the past year, numerous playwrights have attempted to explore the difficult issue of white privilege to varying degrees of success on New York City stages. For some, the issue has proved too complex to distill with any clarity into a short narrative. Playwright Young Jean Lee does not have such an issue in her new play Straight White Men playing at 2econd Stage Theater’s new theater space on Broadway. Yet, Straight White Men is so hyper simplified that the piece feels wildly unfulfilling despite the entertaining humor lacing Lee’s social commentary. This is largely due to the steril and meandering final act that refuses to resolve the core tension in the plot in a bland moment of introspection.

Contemporary music, more at home in a raging dance club, blares through the Hayes Theater as guests take their seats while the “Persons in Charge” (Kate Bornstein and Ty Defoe) greet patrons. The tunes get the younger theatergoers in the balcony bouncing in their seats while the older generations below us seemed a bit stunned by the pre-show ruckus. Bornstein, an inspired (and inspiring) artist and gender theorist, and Defoe, a bold Ojibwe and Oneida artist and activist, are the delightful hosts of this mini party and first take the stage to apologize to those in the audience who felt uncomfortable by the loud dance music. The duo sympathizes with this discomfort, a tongue and cheek acknowledgment of the fact that Bornstein and Defoe are likely subjected to uncomfortable situations far more regularly than the average theatergoer due to their gender identities, before lifting the curtain to reveal a terribly ordinary, tidy living room (designed by Todd Rosenthal) that could have been extracted from nearly any middle class American suburban household. Two white men sit perched upon the furniture. Jake, a divorced Wall Street type and Drew, a successful writer and college professor begin roughhousing until they are joined by their father and older brother, Matt, an academically gifted man who, despite his successes is once again living at home and working in a menial administrative job. The men are not blind to the social constructs that have contributed to their professional successes, discussing their privilege as they prepare for the Christmas holidays. Yet, their conversations sound rote – sound bites passing for intellectual banter. When Matt breaks down crying during dinner, Drew insists that therapy is necessary, assuming Matt is depressed because of his professional failures, and Jake pontificates that Matt’s behavior is altruistic – that Matt has so internalized the problems of white privilege that he has purposefully rejected career advancement to open room for those who are not as privileged as him. The truth, it seems, is far less calculated or emotionally charged.

The family at the center of Straight White Men thinks they are woke, or at the very least aware that they should be, yet this awareness has made little impact on their lives. The men spend as much time wrestling, pulling bro-pranks on one another and engaging in Christmas traditions as they do grappling with their personal and professional issues. Jake outright admits that he makes inappropriate jokes and willfully ignores the lack of advancement of diverse individuals in his industry, and Drew seems earnest to squash discomfort with therapy, as if it was the answer for all of life’s ills. Lee writes these banalities well, with a healthy dose of humor to make the family more relatable. It is the thorny issue of Matt’s living situation that muddles the climax of the narrative. In turn, each of Matt’s brothers and father abandon him because Matt’s professional failures are apparently motivated not by depression or social consciousness but by an unnerving laziness and disinterest in trying to live a worthwhile life. Perhaps due in part to the cavernous Broadway space, this systematic abandonment comes with little emotional pull and makes the exercise of the previous 75 minutes seem like a meaningless endeavor. Some people just do not rise to their potential and do not care to do so? True. But why is that exploration worth my time?

The “white male” ensemble features Josh Charles as the competitive banker Jake, whose swagger and bullishness balance nicely with Armie Hammer’s suave playfulness and enthusiastic incredulousness as Drew. The duo imbue their interactions with humor, adding levity to the narrative. Stephen Payne struggled to recall some of his lines at the performance I attended, but this was likely attributable to his recent addition to the show (he stepped in for Tom Skerritt who backed out for personal reasons), but he credibly portrayed a compassionate family patriarch. Unfortunately, Paul Schneider has a habit of portraying relatively dull characters compared to those around him* and Matt is no exception. Schneider’s subdued comedy is given a few opportunities to shine when he joins Hammer and Charles in a irreverent dance number, but he is too frequently a detached sounding board for the others to bounce their personalities off of rather than a fully fleshed presence in the story. Kate Bornstein and Ty Defoe enliven the show but have very little to do aside from welcoming the audience and appearing to direct stage traffic from time to time – one wishes that these two exceptional performers were given an opportunity to share their own narrative on the Broadway stage rather than facilitating this far less interesting narrative.

Straight White Men is not without its charms – a steady mix of humor coupled with the strong social lens of the #MeToo movement and efforts to promote diversity in the entertainment industry make this play worth a visit, but the climax fails to deliver much in the way of revelatory truths or meaningful commentary beyond that which has already been displayed in many other predominately white, male artistic pieces.

*Parks and Recreation, anyone?