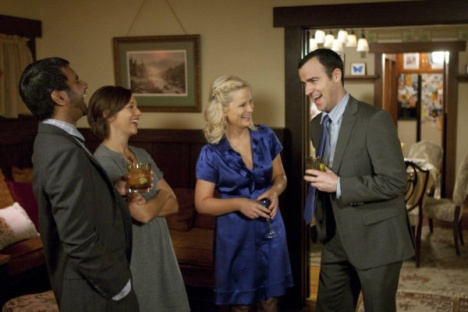 Let’s start with the big stuff – season two of Parks and Rec is ridiculously large. 24 episodes make up this season. More than a few of the best episodes from the whole show’s run can be found in season two (“Practice Date,” “Hunting Trip,” and “Woman of the Year,” to name a few). The push to turn lot 48 into a park is stronger than ever, and the more bizarre parts of Pawnee start showing up in opposition or ambivalence to the proposal. Leslie’s personal life is explored, Andy develops as a character, Ann is taken off her pedestal and made more human with her temper – there’s so much cram-jammed into the season, it’s a bit overwhelming. But it’s really rewarding to see a show realize its potential, find its stride, trim the dead weight and introduce better characters, all in its second season.

Two characters come to mind when I’m thinking of dead weight: Louis C.K.’s Dave, the cop, and the city planner, Mark, played by Paul Schneider. With Dave the cop, it was a relatively easy choice. He’s an awkward person in a cast full of awkward people, but his awkwardness isn’t Leslie’s earnestness, Ron’s rage, or April’s coldness. It’s rigid, and comes off as uptight. Certainly, in the early days of his character, Dave comes off as charming, stumbling, trying to say he’s attracted to Leslie without appearing sexual, creepy or needy. The problem is not the first one – Donna’s got all the sex appeal we need – but that despite his best efforts, he does come off as needy, as creepy. The story is too invested in Leslie for her to move to San Diego, so when Dave brings up that he’s ready to move and he wants Leslie to come with him, we all know it’s not going to happen. His sadness doesn’t even feel warranted, because it doesn’t jive with the upbeat nature of Parks & Rec.

For Mark, I don’t even know where they got off writing him into the show. He’s probably my least favorite character. The idea is that he’s supposed to be the most competent person on set. Mark is always there for support, to save the day, to shake his head at the antics of the Parks & Rec staff. Whatever his purpose, he ends up being a wet blanket, always trying to get people to be serious, to not ramp things up so much. Literally, one of the best things about this show in season two is how much things get ramped up. Leslie’s entire character is ramping things up. Ron Swanson may not engage with the ramping up much, but when it comes to things he cares about, certainly he can get passionate, nitpicky, etc. Mark’s passion was having sex with trashy people. After leaving that behind, he’s left with a job he doesn’t really care about, people he keeps trying to keep on track, and a penchant for drinking beer in a city building. When he takes the buyout towards the end of the season, I clapped.

In the end, the biggest thing about Mark and Dave was they didn’t feel as strongly as the rest of the cast. Everyone on Parks & Rec emotes so powerfully, so vigorously it makes the verisimilitude shake a little. Leslie, of course, is the peak example, but when Ann gets on a tear, she can really make you feel. Not about the park behind her house (because that’s the series arc, it’s gonna take time, I know), but about taking care of her friends, making sure people enjoy her Halloween party, telling Mark what’s important to her. Ron’s rage/sexual peacocking is palpable, real, rubbed right in everyone’s face and simultaneously on par with his aloof, not-wanting-to-get-involved stance. Andy is 100% high energy all the time, no breaks, no pauses. Even Jerry feels strongly from time to time about family, paintings, etc. You can’t put a couple of boring white guys into the mix.

Speaking of which, it’s a real crackup to me that the show replaces two problematic, boring white guys with two substantially more attractive boring white guys at the end of season two. Ben and Chris, the budget guys from the state government, come on the scene to shut the city of Pawnee down, and at first blush, they look like stand-ins for Mark and Dave – one for Leslie, one for Ann. Obviously, I know that’s not the case. I’m looking forward to embracing the nerdy side of life with Ben, and seeing how far Chris’s positivity will take him in Pawnee. I know, people have strong feelings about both characters, and it’s going to make big shakeups in season three, but damn it, this show gets better and better.