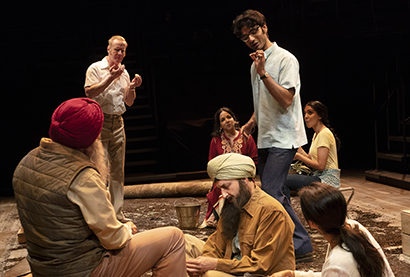 Shaw ’18 Must-See: The Orchard (After Chekhov)

Arguably the greatest challenge faced by a festival with as strict a mandate as The Shaw Festival’s “plays by Bernard Shaw and his contemporaries, and plays about the period of Shaw’s lifetime” is the issue of relevance, or perhaps freshness is a more accurate word for the issue since I honestly believe you can find contemporary relevance in pretty much anything if you look hard enough. The challenge is very real and reflected in the telling dreariness of this season as a whole- all dusty complaints and poofy dresses, the worst habits of a festival that is so much better when the powers that be show a little nerve.

Which brings me to The Orchard (After Chekhov), a much-needed reimagining of a classic to break up the parade of period also-rans. The Cherry Orchard is a strange Chekhov comedy that’s never really worked for me, and not just because there’s a gun in the first act that never goes off (dramatic principles be damned). In her deft and inclusive reimagining having its world premiere at the Shaw this season, playwright Sarena Parmar thoughtfully selects every bit of The Cherry Orchard that’s of use to her in telling her family’s story in 1975 British Columbia, and she surefootedly casts aside anything of Chekhov’s that might get in her way. The plot is adhered to closely, making the few story changes reverberate boldly and superficial changes like names and dates easy to track both in relation to the original play and as a wholly new entity. The result is a better play than The Cherry Orchard.

The main action of the play is repositioned to reflect the story of Parmar’s own family, Indian immigrants with a family-run orchard in The Okanagan Valley, though it’s notable that a creator who so rarely gets to see her own cultural experiences represented on stage also makes a point of touching on the important roles played by Japanese settlers and the Indigenous people in the region with small but impactful parts played by Kelly Wong and Jani Lauzon. The rest of the cast (including a standout Shawn Ahmed as eternal student Peter) plays close approximations of Chekhov’s characters, written with insightful detail to reflect their updated generational and cultural realities. Camellia Koo’s inspired costume work not only nails the period but subtly illuminates the themes of identity that shine so particularly brightly in Parmar’s version of the story, culminating in a devastating unspoken moment involving Sanjay Talwar’s character.

There are moments when Ravi Jain’s direction is a tad overwrought or the performances a little broad (Rong Fu’s Donna does nothing but buzz irritatingly though she’s haunting in a brief double-cast appearance as a boy intruding on the property) but The Orchard on the whole is essential viewing in a bleak Shaw season, a true testament not just to the necessity but to the feasibility of freshness from the depths of a dusty mandate.