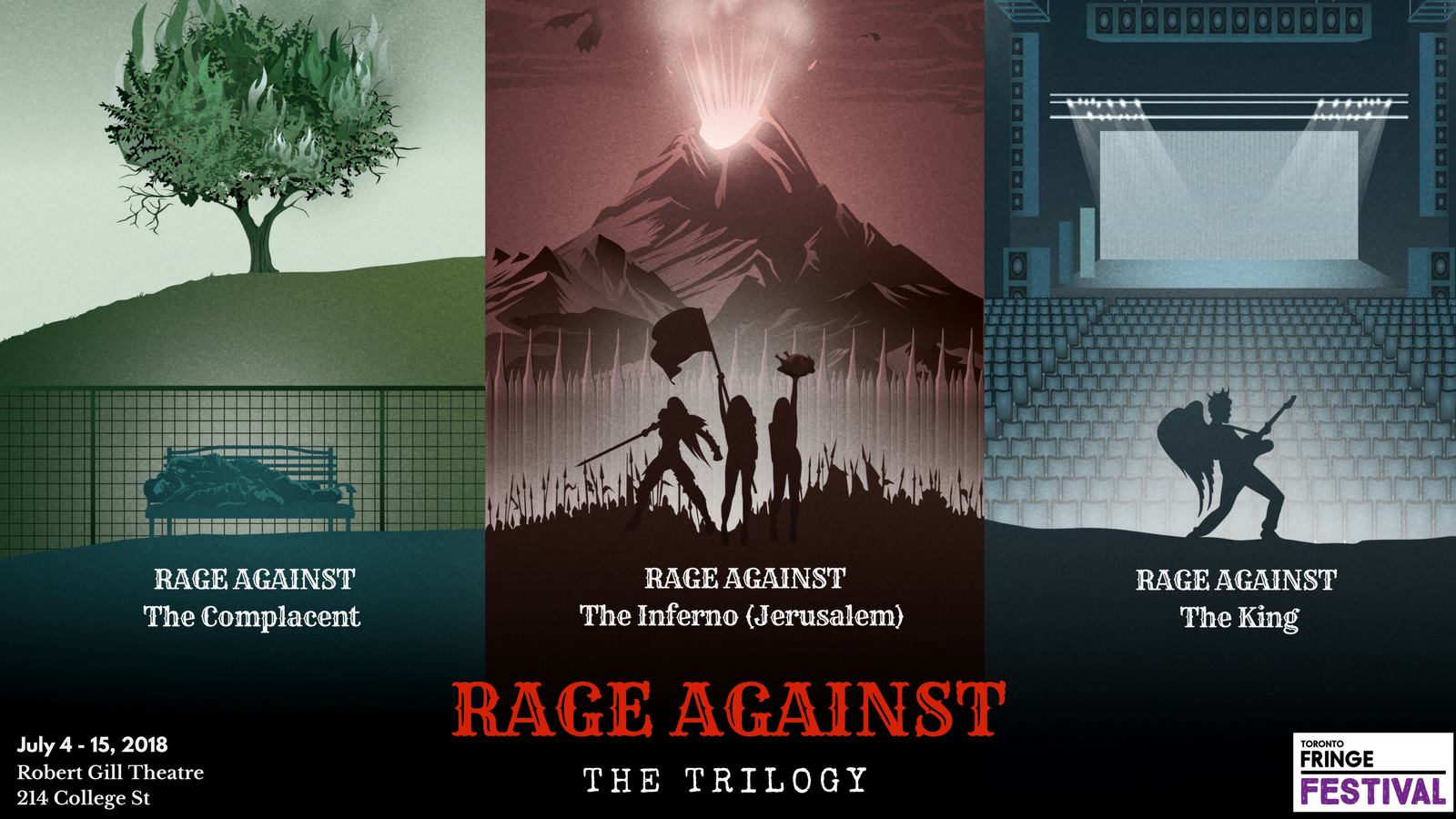 Theatre ARTaud, Filament Incubator & Sketch Platform Productions’ trilogy of three very different but interconnected new works is one of the notable features of this Fringe. Viewable in whatever order you want, the Rage plays offer a rare sense of scope, existing in a shared universe that the audience gets to examine from three different angles while the rest of the festival offers up quick hits of story you’re meant to move on from with only 60 minutes and $13 worth of investment. The Rage Trilogy can be experienced in pieces, but none of the individual components really stand out enough on their own. It’s the idea of the trilogy that makes the trilogy interesting and each one is definitely improved by understanding the context of the others.

Rage Against the Inferno (Jerusalem) (B+)
My favourite of the three plays is also probably the most divisive. Oscillating between realism and surrealism then back again, writer/director Rouvan Silogix’s Inferno centers on three young women entangled in what one could simplistically call a love triangle but sometimes resembles a thruple and is in reality much more and much less complicated. The strongest cast in the trilogy, Kayla Jo Farris, Brittany Cope, and Athena Kaitlin Trinh do a great job connecting the audience to the characters’ emotional reality so we’re willing to follow them even into the play’s stranger surreal sequences or political lectures (Inferno touches on everything from food waste to conflict in the Middle East to the issues of homelessness and authenticity addressed to varying degrees in the rest of the trilogy). It has the highest emotional stakes of the trilogy by far and Cope’s performance is the acting highlight, making Inferno stand out as the most relatable despite also being the most explicitly strange.

Rage Against the Complacent (B)
This one is hard to discuss without spoiling so go see it then continue reading…. Now that you’ve seen it, you’d probably agree that the last grade this show deserves is a B. The experience of Rage Against the Complacent is fairly unpleasant while you’re actually watching it- it’s all condescending lecture and student-y direction that is deeply reminiscent of SNL’s dead-on high school theatre sketches. But not too long into it, you start to suspect, or perhaps the word is hope, that there’s a gulf between the point of view of the narrators and the author (director/playwright Daniel Bagg). There is. The play operates as a sort of test of how long it takes you to see through the protagonists who collectively narrate a story about fighting the ‘good journalistic fight’ while ragging on their former classmate who is trying to help them out by offering them jobs at her successful Buzzfeed-esque site. With mimicked hyper-stylization and deeply recognizable rhetoric, Bagg has so truthfully constructed his critical portrait of self-righteousness that you can’t be totally sure that it is a criticism until you’re being hit over the head with it. He’s refreshingly mocking both the self-conscious and self-serving “goodness” that infects our particular culture/generation/community like a plague and the masturbatory art that glorifies it. The execution needs more nuance and it’s far too possible to come away from this play unsure that everything it achieves was totally purposeful, but it offers up a much-needed perspective and is deeply incisive in its observations. It’s an A idea with D downside so, while nothing about it is middle-of-the-road, a B it ultimately earns.

Rage Against the King (B-)
Writer/c0-director Andrew Markowiak’s far more straightforward play about a rock star who wants to go solo has my favourite script of the trilogy but the weakest cast. It’s more focused on personal storytelling and is thus less philosophically ambitious than its counterparts, which isn’t necessarily a bad thing, unless casting is a problem. Though line flubs were a problem on opening night, Laura Darby (who also co-directs) and Tristan Claxton fare decently well but Samantha Vu is incredibly weak in the lynchpin role of a conflicted record executive who carries much of the play’s heart. The execution of King is rough-edged and inelegant but on a text level it’s fairly deft- quick-witted and subtle in its rumination on the impactful trilogy-wide theme of authenticity. Each play in the trilogy is enriched by knowledge of the others, both on a thematic level and in the satisfaction of seeing the pieces of world-building fall into place, so King is at a disadvantage being the first one I saw. But, while it was the least effective individual production of the three in this run, it’s the one I’d most like to see have a second life.