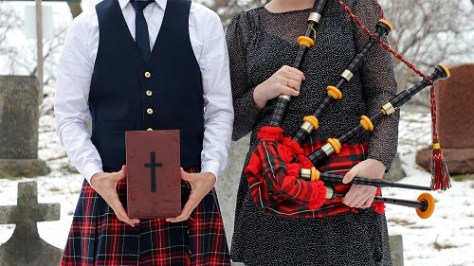 Robert. (A-)
Produced by Lark & Whimsy Collective, playwright Briana Brown’s tragicomedy about family, identity, and loss depicts the full range of human experience. Janelle Hanna and Chris Baker play not quite estranged siblings, Kat and James, who reunite in a hospice while waiting for their father to die. Their lives have gone in radically different directions and they struggle to make conversation until James accidently reveals a secret he’s kept from childhood that will change everything. Hanna steals the show in a masterful performance as underachieving younger sister Kat. Her comic timing is impeccable and she takes Kat on a satisfying emotional arc, displaying a maturity and affecting vulnerability towards the end of the play. Chris Baker is largely left to play the straight man to Hanna’s more high-strung character, but he imbues James with depth as well. The sibling relationship between Kat and James feels genuine, with all the jealousy, shared experiences, and love that implies. Robert. is a two-hander but never feels stagnant due to the movement generated organically from Hanna’s character. This is undoubtedly one of the best uses of space I’ve seen in a site-specific show. The beautiful St. George the Martyr Anglican Church does double duty as both a hospice waiting room and as the site of a funeral, and its acoustics heightened the polished opening night performances given by both actors. Briana Brown’s original script hits all the right notes. Seamlessly combining comedy and tragedy, Brown has created a play that’s funny, thoughtful, and that serves as a poignant rumination on family, identity, and how to move forward when everything changes.

A 6ix NNNNNN Revue (A-)
Refreshingly diverse  four-man troupe TallBoyz II Men combine political satire with bro humour in this full length sketch comedy revue. In pursuit of an impossible 6 NNNNNN review from Now Magazine, the troupe muses on what a show would need to do in order to receive the coveted rating, while taking a few jabs at last year’s Best New Play winner, The Seat Next to the King. Sketches cover the omnipresent nature of ads, hard-hitting but funny commentary on racism and racial profiling, and even dip into black comedy and absurdism. Besides the harder hitting moments, standout sketches included an extreme Slam Dunk Competition, and  a burn unit for playground insults.  Each member of the troupe brings a lot of energy and physicality to their comedy and they work effectively as a team, but there are a few misses. A sketch on sexuality falls flat and the show suffers a little from a false ending. Audience suggestions throughout the show on what a six NNNNNN show must have culminate in an improvised sketch that has a note of finality, but it’s followed by a rap about murder at sea that goes on too long. Clocking in at 75 minutes, A 6ix NNNNNN Revue is on the longer side for a Fringe show and would benefit from some editing to tighten things up, but TallBoyz II Men is a talented troupe that works well together and the sketches had me laughing consistently. It doesn’t hit 6 NNNNNNs, but it’s damn funny.

Judas Star Supersong (B+)
Fans of Andrew-Lloyd Webber’s rock opera are sure to enjoy this passionate one-woman tribute to Jesus Christ Superstar. Accompanied by keyboardist/musical director Giustin Maclean and percussionist Pieter Huyer, Dora award winner Paula Wolfson performs a pared down version of the score that has been trimmed to a tidy forty-five minutes and re-arranged for a single performer. Wolfson’s passion for the material shines through as she ably delivers the challenging score in a distinctly musical theatre (light on the rock) performance. There’s no denying Paula Wolfson’s talent; Highlights include a moving rendition of “I don’t know how to love him”, a quiet and introspective “Pilate’s Dream”, and a “Herod’s Song” that admirably strikes a balance between flamboyance and threat. Her voice shines on the slower, more melodic songs, but can edge towards nasal on a few of the more up-tempo numbers. Undoubtedly aimed at those who are already familiar with Jesus Christ Superstar, there’s little differentiation between roles. Wolfson does some character work (notably as an exuberant but scornful Herod, and as Pilate), but Judas Star Supersong is really more of a concert than a musical. Setting the performance in a church adds another dimension to the show, providing an atmospheric backdrop even for those who aren’t religious, as well as amazing acoustics. Ultimately it’s a  well-sung, compressed, one-woman version of Jesus Christ Superstar. If that’s what you’re in the market for, and judging from the enthusiastic response Thursday evening, many are, it’s an enjoyable evening in which Wolfson’s talent and passion combine to create an affectionate tribute to a beloved musical. I even, and I say this as someone who shudders at the words “audience participation”, loved the group sing-along at the end of the show!

Aspergers: More Tales of a Social Misfit (B)
Rarely do I see a stand-up show and feel like I’ve learned something, but Autism Productions’ Aspergers: More Tales of a Social Misfit is comedy that educates. Returning to the Toronto Fringe Festival, author and comedian Adam Schwartz’ short set mostly consists of observations and anecdotes about the social challenges of living with autism. From job interviews, to meeting women, to his overprotective mother (who was seated in the audience), Schwartz is honest, but never self-pitying, as he sets up jokes based on expected social norms and then describes how he acted in a situation. One of the hallmarks of Aspergers is a deadpan delivery, which Schwartz uses to great effect. Displaying excellent comic timing, he never overstays his welcome or lets a joke run past its expiration date. The show is more chuckle softly to yourself than laugh out loud funny, but the material is mostly solid. A few times it veers into territory that relies on tired stereotypes about women (referring to their “time of the month” or obsession with purses), but this is the exception, not the norm, in a show that manages to both educate and entertain.

From Newfoundland With Asthma (C+)
Colin Hollett seemed surprised by the size of the crowd at his first Fringe show on Thursday evening. The affable Hollett confessed that he came up with the title of the show and submitted his Fringe application while drunk, missed the advertising deadline, and expected to play for just a handful of people. Perhaps this accounts for the rough around the edges feel to his opening show. Hollett initially seemed a little thrown by Toronto audience sensibilities, although he bantered admirably, poking gentle fun at the crowd so it felt like we were all in it together. Displaying an easygoing Newfoundlander charm and an infectious laugh, Hollett also has terrific physicality; using his whole body to tell stories. The show has memorable moments, notably tales about the cultural differences between Newfoundland and Toronto, a bit on dating apps, and humourous accounts of his experiences as a person with asthma, but the rest of the set could use some polish. It doesn’t help that Hollett begins and ends the show with his weakest jokes. The opening routine on how easily offended people are edges into the vulgar and overstays its welcome. I also found his final joke, in which Hollett implores female audience members to “quit playing mindgames” and just tell a fellow if they aren’t interested, off-putting. It shows a lack of awareness about women who may feign interest in a man because they’re worried that the man will behave violently or refuse to take no for an answer if they reject him outright. Lacking an advertising budget, Hollett said at the top of the show that From Newfoundland With Asthma is selling well based on the title alone. I just wish that there was more Newfoundland and asthma in the show and fewer jokes about female behaviour.