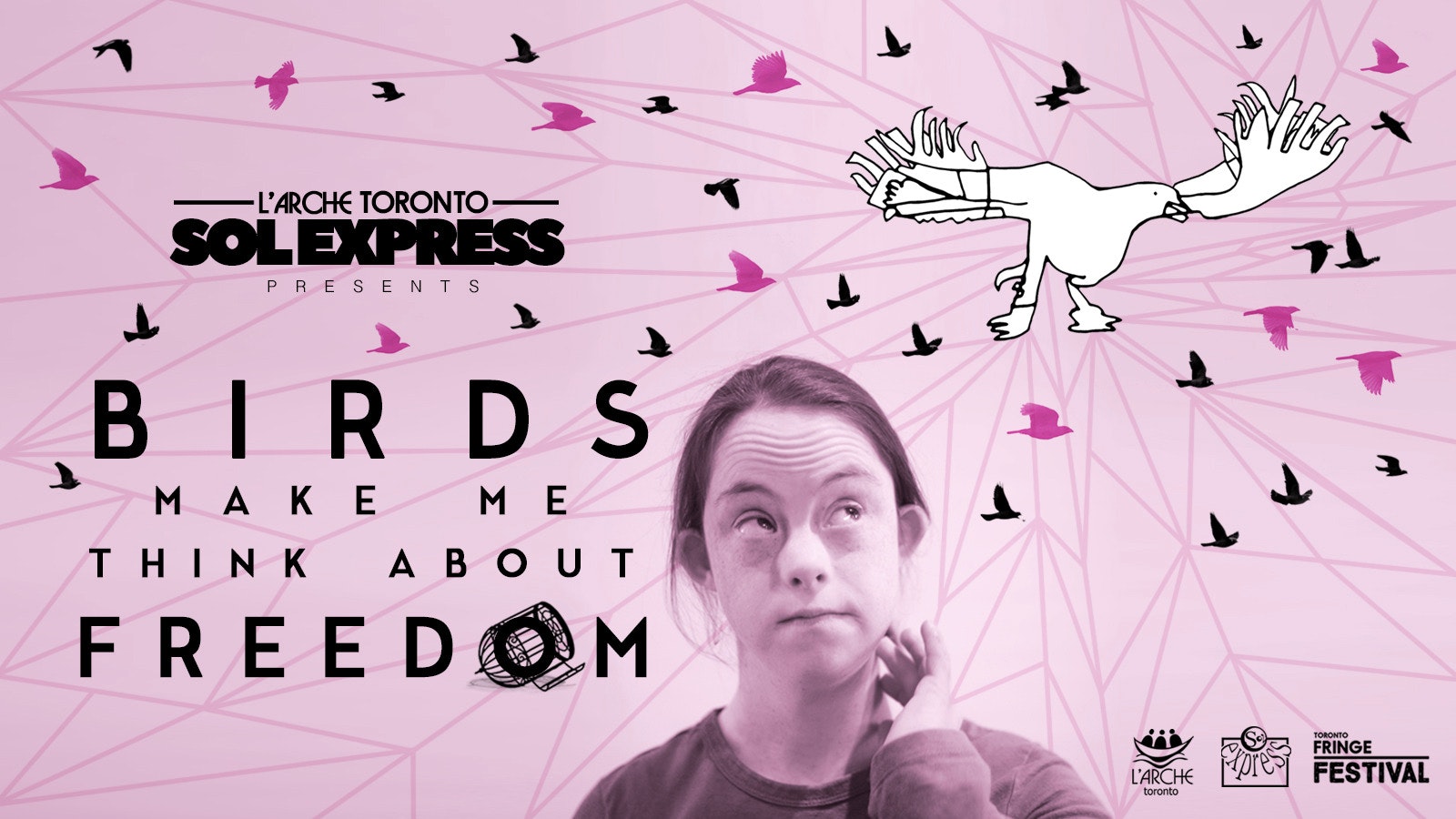 Birds Make Me Think About Freedom (B+)
This ensemble work is a powerful and powerfully collaborative look at the abusive history of multiple mental institutions in Ontario, from the 19th century to the closure of the remaining centres (of which there were sixteen in total) in 2009 and subsequent provincial government apology. Conceived by L’Arche Toronto Sol Express, the hour-long piece is made up of sequences that reflect the documented events and experiences of patients of several of these institutions, and subsequent attempts to rectify and process the resulting trauma. The production is chiefly made up of actors with developmental disabilities, whose commitment to the work is total. We see them inhabit birds, emblems of liberation in the show, and there is an atmospheric and sadly pertinent depiction of the separation between families, illustrated by means of a large black cloth.There are also moments of levity, including a fun radio interview between two of the cast members talking through their ideas of freedom. An onstage band led lead by a singer sit stage-left, adding a connective musical tissue to the various scenes. While the show could probably develop more of an overall coherency, the cast’s total commitment and collaborative confidence in their vision is a moving rejoinder to a more proscriptive, outsider’s depiction of this unjust part of Canada’s legacy, and the show remains compelling and moving throughout. It was also, for me at least, tragically informative.

Hamburger (B+)
The Hideout at College and Bathurst serves as the setting for this Informal Upright Theatre Collective story of workplace politics that examines its issues of gender and power in surprising ways. Lib (Mina James), preparing to finish high school and with high ambitions for herself, is working under the decade-older Arie (Zach Parsons), an amiable but aimless guy who spends much of his time teasing Lib about her veganism and tempting her with the restaurant’s signature burger. The two flit around each other and us in the Hideout’s bar area, with Lib seeming to alternate between enjoying Arie’s company and becoming impatient to get away from him and this particular job. She eventually does, before Arie comically but invasively re-enters her life. The story Ciarán Myers has written is clever and quietly grim in how it arranges and re-arranges the power dynamic between the two almost-friends, though the dialogue is a touch arch and overly dense at times, and aspects of the show were not (to me at least) always as clear as they might have been. Still it’s a short, sharp tale nicely directed by Sukhpreet Sangha, who makes fun use of the space and who brings out two strong performances from her leads: Parsons, replacing the original performer just two days before the show’s opening, does an impressive job maintaining a dynamic with James and locating a wry, subtly calculating character while keeping his script nearby (at least during the show I saw; this may have changed). James meanwhile is compelling and funny, grounding the show with her performance and expertly depicting a character with an increasingly strong sense of self who finds herself beholden to a person whom she thought she had moved beyond. A meaty, flavourful hour.

Jem Rolls: I, Idiot (B+)
Jem Rolls returns for his latest one-man show pontificating on a new subject that has captured his imagination. This year, it happens to be his own brain, which at one point he describes as less like a library then “a ransacked grocery store in a third-rate zombie land,” and he takes us on an almost phantasmagorical journey through his consciousness that is by turns revealing, totally confusing, and very funny. Having only previously seen Rolls tackle historical subject matter (The Inventor of All Things, his show about Leo Szilard and his role in the creation of the Atom Bomb), I would say that he perhaps has a slightly more difficult time here capturing the audience as he wheels through sections and sub-sections of his own self-examination like W.G. Sebald if he were a member of Monty Python (he refers to his text as a “verbal bouffant”). The references flit by, and the text that he has composed for himself is so dense that a large factor in our engagement is his ability to plough through it with nearly no hesitation. But he remains a very compelling theatrical figure, with the voice and face of an authoritative BBC Science presenter and the hair and physical mannerisms of a six-year-old enthusiastically presenting his first self-penned show to his parents. It’s a striking combination, one that makes the show and his performance engaging even when in the moments where you’re not quite sure what he’s talking about.

2018: A Sex Odyssey (C-)
In the near future, climate change has lead to the planetary chaos and a massive drop in fertility; those who can still reproduce are placed in a spaceship and jetted off to Mars to start a new colony. What follows is ostensibly a sex farce of sorts set aboard the ship, where unexpected couplings cause confusion and drama amongst the passengers. A game group of actors and a potentially funny concept is undone by a script that just doesn’t feature many jokes, and whatever farce there might be seems unfocused amidst scenes that go on and on without any sense of pacing or structure. Of the trying-their-best cast, Brian Milward succeeds the most based on pure manic comic energy. With a better developed text and more focused direction, this sexual space odyssey could be a shining success – as it stands, you may want to keep your eyes wide shut.