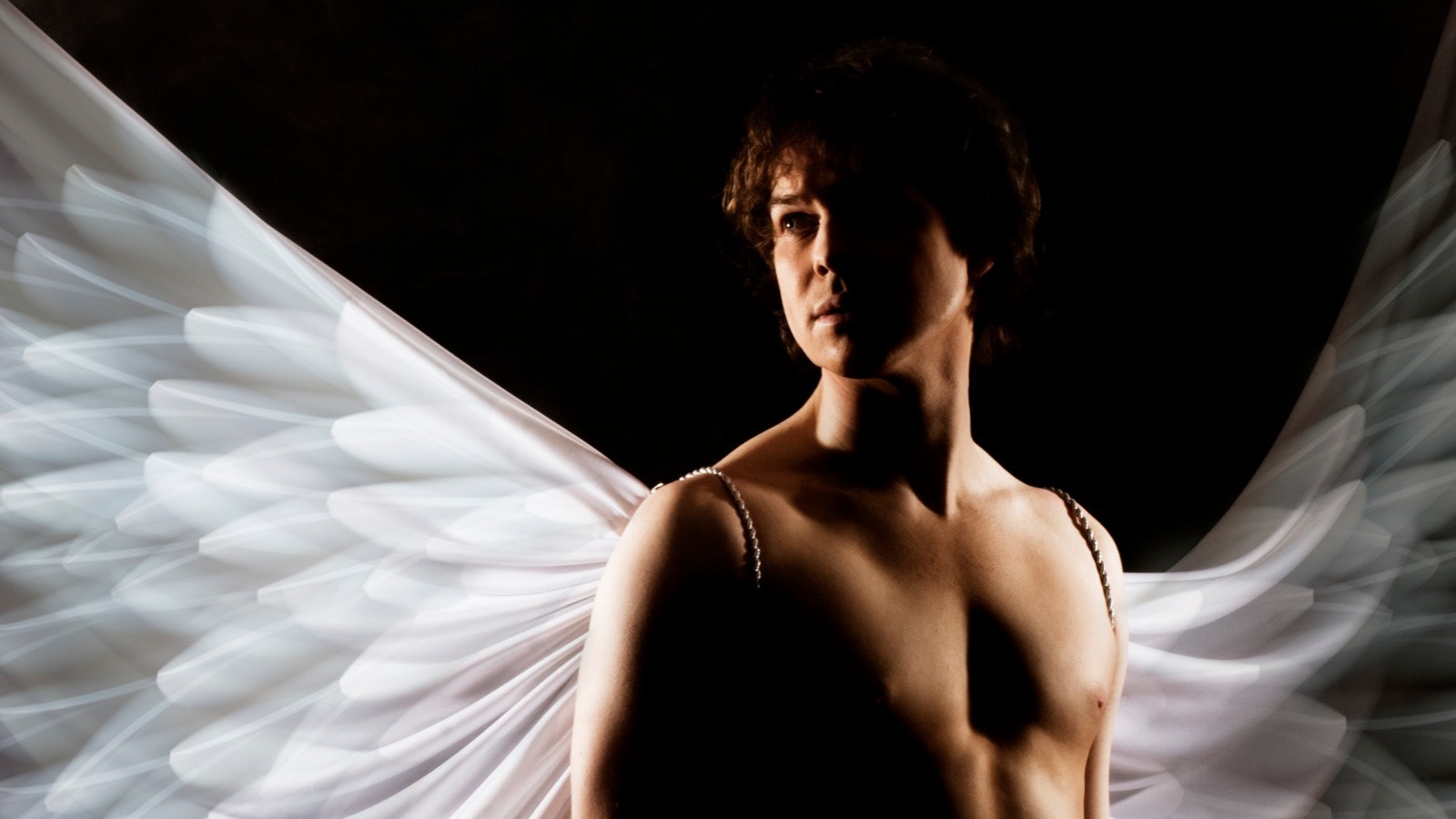 Paradise Lost (A)
John Milton’s poem about the fall of man (and that of Satan) is more famous for its purported subject matter, Satan as protagonist, than for its actual text these days. Which is fair enough, 17th century epic poems can be hard going. Director Paul Van Dyck looks to bridge that gap for a modern audience through projections, puppetry and manipulation of his own body against the stage. There is a minimalist elegance in touches like wrapping his arms in the long curtains otherwise used to screen projections to create the flowing wings of angels. He has a deft enough hand that the smallest shifts in poses to the wood hewn figurines of Adam and Eve carry depths of emotion. These subtler effects allow for an impactful contrast with Van Dyck’s strutting, rock star Satan, they establish a quiet, but enduring, strength and grace to clash forceful personality against. The juxtaposition of those elements is a brilliant way to bring audiences into the thematic heart of Paradise Lost. Though I will say that the use of the Rolling Stones for backing soundtrack was maybe a bit on the nose.

Police Cops in Space (A)
Reviewing a wildly successful comedy and coming off like you have anything insightful to say is a bit difficult (though nowhere as difficult as staging a wildly successful comedy). There are only so many ways to say “this was absolutely hysterical, go see it now.” You pick too much at a joke to analyze it, it loses its power. So, this was absolutely hysterical, go see it now. Not enough? Alright, Police Cops in Space is an extended dive into 80s sci fi flicks by comedy trio the Pretend Men. The references fly fast and furious, but recognizing any of them isn’t remotely necessary for finding yourself laughing uproariously with the rest of the crowd. Pretend Men’s bag of tricks include surprisingly well timed dance moves, what seems like an entire show spanning competition to see who can get the others to break character, and relentlessly, hilariously inventive uses of some of the cheapest props in the festival.

SUM: A Shadow Puppet Reading of David Eagleman’s Tales from the Afterlives (A)
There is an elegiac, contemplative quality to SUM. Which is appropriate, considering the title is a reference to “Cogito, Ergo Sum”. I think, therefore I am. The show is an effort to give visual life to David Eagleman’s novel, a series of short stories about multiple different, mutually exclusive depictions of the afterlife. Some are cruel, some are funny, some are philosophical, some hauntingly sad, and some are just outright bizarre. All reflect a desire to ponder what world might be beyond the one we know, and what such a world would say about how we live now. SUM handles such thoughts with an appropriately atmospheric and cosmic touch. The show’s skillful shadow puppetry allows for well realized eerie and otherworldly images. A particular favourite for me were the constantly forming and unforming, intricately sketched outlines depicting the story of a single quark drawing out the entire universe in every possible moment. Even on a level of craft, that was thoroughly impressive. SUM is often deep and heady material, and it feels fair to note that if you’re not feeling in the mood for that sort of thing, the show isn’t going to convince you that you should be.

Restless Spirit (B)
Restless Spirit is a sort of Sixth Sense meets Old West Hucksterism riff. It’s a play that looks at the 19th century spiritualism craze, creating a troubled family that found it all too real. The play pretty much hinges on how well Nicole Marie McCafferty can portray Nell Hart, the haunted figure at the center of its events. Fortunately she’s phenomenal, which is appropriate for someone playing an exploited phenomenon. Haunted, innocent, desperately hopeful and eerily traumatized in equal measure, McCafferty anchors the performances and narrative around her through the intensity of her gaze and bearing. Undermining her overall impact though is a play in a considerable rush to set up a final, alienated, spooky scene. While the image the play leaves us with is an effective and chilling one, the cost of reaching it was a bit much. Whole characters and plot elements are either rapidly resolved or just driven away without all that much plausibility in order to get them out of the way. Ideas like a brief suggestion that Nell’s ghosts could take tangible action to defend her or vent their rage into the world aren’t allowed to go anywhere, which is frustrating. This is a show that could have used another ten minutes just to let it breathe for a bit for sake of atmosphere, or at least to better pull apart character bonds that were otherwise so strongly established. I recommend it mostly for the spectral strength of the performance of its lead.

Kitchen Sink Drama (B-)
Kitchen Sink Drama is an illustration of the problems I sometimes have with site specific venues at Fringe. They can sabotage a show as much as they can help it. It’s a clever idea to stage a series of mini plays connected by a theme of food in a community center kitchen, it really is. But the only thing especially separating that kitchen from the sounds of the street immediately below, was a closed window. Distractions were not small, not helped by that there seemed to be some kind of street festival going on during the show I attended. The small space also led to some awkwardly spaced seating options. For one of the segments, I basically spent most of it looking at the back of one of the performers. This isn’t to say the segments lack for talent, emotion, charm, humour and impact. The shorts wove in the idea of food and its preparation to their plots with everything from sensuality to visceral emotion (though the initial segment about a scullery maid turned siren didn’t feel as connected). The performers do a fantastic job rising above the limitations of their venue. I just wish I didn’t have to do the same as a member of the audience, nor be left wondering how much more I could have enjoyed the show if I could have experienced it without interference.

We The Men (B-)
An important facet of the Me Too era is that of men hopefully re-examining their own identities and finding ways to express them without the built up toxic masculinity layered in across generations. We The Men looks at a group of men on a wilderness retreat struggling to do just that. Director Tracey Erin Smith based the show off of discussions she and her company held with groups of men working towards that sense of redefinition. As a particularly clever touch, the entire cast are women, playing the roles of men, adding an extra layer to that idea of understanding identity. But while the core notions are worthwhile, the execution is more than a bit rough. The show, despite being 75 minutes long, still finds itself in a rush to make sure that every character gets their defining soliloquy, and some of the deliveries were a bit choppy besides. It’s at times less an overall play and more 8 guys making various speeches in-between a crude joke here and there. Some of those speeches manage to be emotional and insightful all the same, but there could have been more binding the moments of them together.

Geek! (C)
There’s a real sense of charm buried in the middle of all of Geek’s problems, and it has the same source as most of those problems; a sincere love of source material. A play about a pair of hardcore anime fans making their way through a convention to meet their idol could be fodder for some especially cruel and spiteful parody, which is far from the case here. Unfortunately, while taking the more respectful path, cast and crew forgot that the tropes and devices that work in anime, don’t necessarily translate well to live theatre, if at all. The show reels between grounded, real world plots of grief, growing up and friendship to outright magical sequences without much rhyme or reason between them. This would be easier to take in an actual anime, where a framework of animation starts the viewer off with a level of remove from reality as is. Instead the show just expects the audience to roll with abrupt, out of nowhere fantastical developments that are often gone as soon as they came. At times the more cartoony events feel like they happen to give resolutions to emotional or dramatic beats that the narrative lacked for any other way to resolve. There are genuine moments where the love of the material that inspires this production shine through, and it’s difficult not to smile for seeing them, but they come at the cost of a coherent whole.