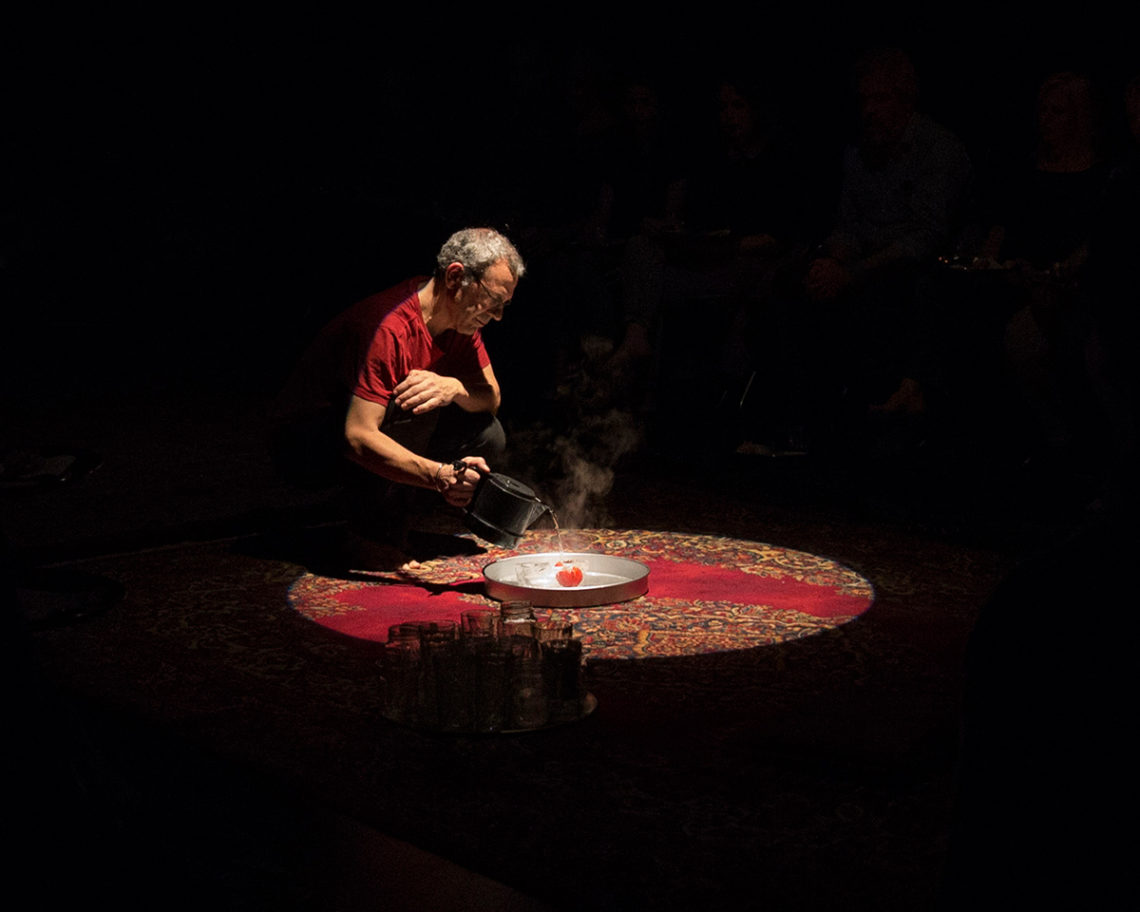 Love is a daunting theme on which to base any kind of project, not least because it’s been written about for thousands of years, and any attempt to say something new is nearly impossible.

40 Days and 40 Nights (co-produced by Necessary Angel Theatre Company, Electric Company Theatre, and the Theatre Centre) ambitiously tries to tackle the concept in a theatrical setting. It aims high, and falls a bit short of its target.

Entering the space, you are directed to find a mat on which to leave your belongings (including your shoes). You then make your way around an enclosure to one of the openings between the curtains, where you ring a bell and enter the performance space. The room itself is striking, framed with black curtains, audience chairs on three sides, and lit with soft lights and candles. Two carpets cover most of the stage, with a banquet table at the end draped in cloths and covered in candles, silver dinner plates, and books.

Brooks approaches my date and asks her to choose a poem from his book, which he reads aloud to those of us who could hear him. Shortly after, Collier initiates the action silently, motioning for us to stand and move into a circle in the centre of the room. She indicates wordlessly for us to select a glass partly filled with water, which we all do. She mimes a toast, we drink, and return the glasses to the silver trays.

Audience participation is not always my jam, but a lot of it works. Each audience member gets a tray with various items. At one point the lights dim, and Brooks and Collier throw out different yes or no questions about love, to which people respond by deciding whether to light a small electric candle. The result is interesting, beautiful, and intimate.

The show is episodic, and contains many different moments in which they approach the topic from many different angles. It’s partly theatrical but also intellectual. They have researched love, reading poetry and philosophy and political history, and they want to provoke thought and conversation about the topic.

The rest of the show involves conversations between Brooks and Collier, vignettes of a long term relationship, and moments that were like modern dance or performance art. A lot of the images they created are striking. One moment that seems powerful is something between movement and dance between the two as they alternately collapse in each other’s arms, lift each other, and move their bodies against the other’s indicating support, affection, and desire.

I actually wanted more moments like this from this production. Yet while the two own the space and create an intimate environment, there is no real narrative, and the show itself doesn’t hang together. The resulting experience is a mix between a comparative literature seminar, vague memories I have of daycamp, and a dinner party hosted by an interesting intellectual couple who you’re mildly worried are also trying to initiate you into a secret cult. I felt frustrated with several moments that seemed forced and overly intellectual, and a lot of their conversations about love resulted in rambling monologues or overgeneralizations about politics and violence that don’t resonate as new or insightful, which is perhaps not that surprising given the size of their chosen theme.

I left the show with mixed feelings of frustration but also impressions of many beautiful moments, both of Brooks and Collier but also of the kinds of collective interaction they facilitated. While the show only runs 90 minutes, it feels quite a bit longer, and I suspect that’s because the show tries to do too much.