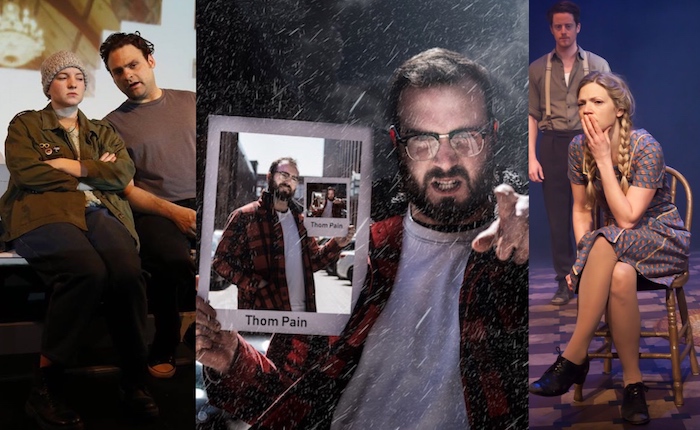 On Stage in TO: Pain, thematically speaking

Thom Pain (based on nothing)
(Theatre By Committee)
This Theatre By Committee solo show staged at Hub 14 (literally just a room at the top of a rusty staircase) is the best piece of theatre I’ve seen in a very long time. To start, it’s an extraordinary bit of writing from Will Eno- an ambitiously premise-less monologue that asks the audience to listen to a random man talk about who knows what for an hour. It’s an intellectual, emotional, evocative, existential, powerhouse script that is- in traditional Eno fashion- both remarkable and commonplace, spiritual and deeply human. I wanted to write down every other line and write it in sharpie on my bedroom wall. A gimmick-less solo show is difficult to direct, at least in any way that stands out, but Hannah Jack does a wonderful job identifying moments for movement and embracing moments for stillness, making what is essentially a lecture into something more immersive (she’s also the credited designer which means the Paula Abdul t-shirt was her call; I didn’t hate it but I can’t say I get it, which is maybe the point?). But it’s solo performer Owen Fawcett who really makes this tragically short-lived production the emotion monster that it is. Deftly navigating an insane roller coaster of topics and tones, Fawcett gives a performance so captivating I’ve yet to come down from its high nearly 12 hours later. The sheer range of dynamics in the piece is incredible and Fawcett flies through them all with stunning ease, so centered in the material you’d think it was autobiographical. He had me cackling with laughter then fighting back tears then he’d look me straight in the eye with such seer-eyed directness that I wanted to laugh and cry at the same time. Thom Pain is an absurd all-over-the-place play about everything and nothing but every single second of it rings achingly, alarmingly, beautifully true.
It’s probably over by the time you’re reading this (the whole run is only 4 shows) but, just in case, here’s the ticket link.

Therac 25
(Unit 102 Actor’s Company)
There is something trying about a play that expects a certain emotional response from its audience. Despite the moving subject matter and a pair of beautifully vulnerable performances, I felt emotionally distant throughout this Adam Pettle piece about tentative love born in a cancer treatment waiting room. The play, and this Unit 102 production over-directed by Jessie Fraser, seems to demand tears rather than earning them. Aaron Collier’s abrasive sound design invades every single moment of silence, never letting the audience just sit with the full weight of the emotion or the insightful awkwardness of the situation. That almost anxious dramatization permeates the production in general with moments of forced action piercing otherwise naturalistic performances like dictated direction rather than organic reaction. Cass Van Wyck brings a really appealing warmth to the character of Moira that helps flesh out an otherwise simplistically hard-edged heroine but the moments of truth she and Luis Fernandes are able to carve out get lost behind the capital t Tragedy of the clunky script and heavy-handed direction.

What a Young Wife Ought to Know
(2B Theatre Company/Crow’s Theatre)
This refreshingly sex-positive period piece from the ever-reliable Hannah Moscovitch is a little too issue-driven for my taste- skimming a bit too quickly over characters’ feelings to depict characters’ struggles- but it tells an interesting story about life before birth control and the dangerous realities of a time too often inaccurately idealized for the sake of contemporary moralistic argument. David Patrick Flemming makes the somewhat underwritten husband role compelling and showcases excellent chemistry with Liisa Repo-Martell as the titular young wife but our heroine is miscast, too old for the role and thus too often tempted to “play young”, squealing and chirping her way through the story’s happier moments. Rebecca Parent is wonderful as the older sister whose tragedy forces Repo-Martell’s character to grow up far too fast and I wished the whole time that it was her story we were following. What a Young Wife Out to Know showcases many of Moscovitch’s trademarks (the single-storyteller focus, the fourth-wall-breaking narration) but it lacks the emotional complexity of her more character-centric pieces.