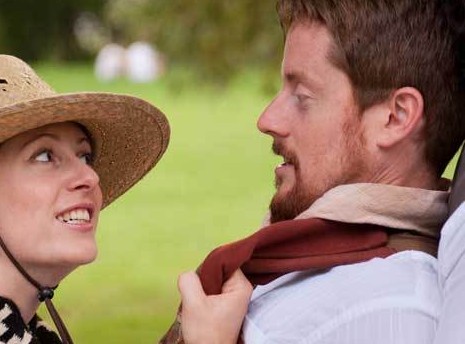 Nominated for both Best Supporting Actor in a Regional Production AND Best Ensemble for that production, the comedian is one of only a few double nominees in the Interview Series this year.

What’s your favourite role you’ve ever played?
I dont know If I have a favorite. Ones that standout to me right now would be Rudi in East of Berlin, Phil in Raton Laveur, Percy Shelley in The Apology.

Do you have a dream part you’d like to play one day?
I dont think I do! Does that make me a lame actor?

How did you get involved in Two Gents?
I became friends with Brendan McMurtry-Howlett doing another show at YPT and he asked if I wanted to be involved and I jumped at the chance. (He may remember that differently).

What were some of the challenges of playing in a park? Were there many amusing mishaps?
Challenges are sound and volume for sure. Kids running up on stage just to hang out. Drunk teens can also pull focus at times.

You played three different characters- Speed, Sir Thurio, and Don Antonio- how did you differentiate the three?
Physicality I guess is where it starts. Just messing around with different ways they hold their bodies and where the voice comes from, what best suits the text and the story thats being told.

Did you have a favourite?
Hard to really say. If I have to choose I would say there was a few moments with Thurio that I loved doing every night.

Do you have a favourite moment in the production?
Standing in the wings waiting to come on and looking at this little intimate charming stage in the middle of a park. Humbly lit with hundreds of people hanging on to every word. It was a beautiful image.

Which directors and actors have had a major influence on you throughout your career?
Oh god there’s too many to name. I will say Every show I’ve ever done I’ve learned something. And I have had an opportunity to work with some really amazing artists over the past 10 years.

What are you doing now/ what’s your next project?
I just finished doing a show at Calgary’s ATP ( The Apology). This summer I’m doing Shakespeare in the Ruff again- Richard the Third.