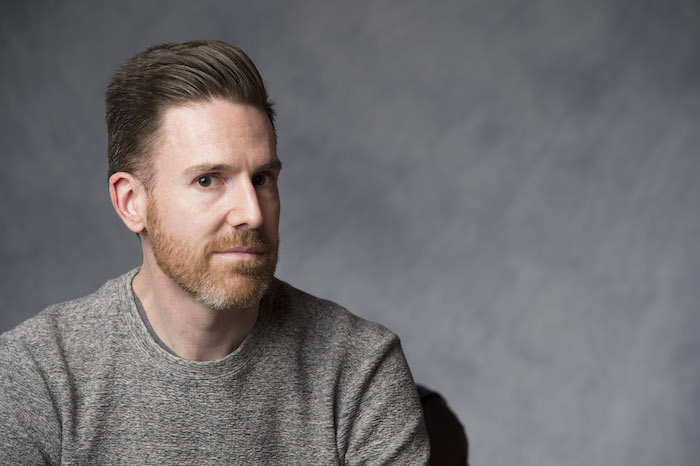 The remarkable Michael Gianfrancesco is one of the most prolific theatre designers in the country, nominated for a fifth time for Outstanding Set & Costume Design. Known for his versatility and detail, this year it was his work on director Eda Holmes’ stylish and atmospheric Dracula at the Shaw Festival that scored him his nomination. Inventive set work that allowed for some memorable theatre magic and lush, eccentric period costumes made the production an aesthetic knockout.

Do you remember your first experience with theatre?
When I was 5 years old, my mother took me to a theatre production of Snow White. I remember being frightened by the scene where the witch gives Snow White a poisoned apple. The witch appeared magically and I remember that moment vividly. My sister and I were taken to a lot of live performances growing up, which we loved.

How did you first get into designing?
I went to Eastwood Collegiate high school in Kitchener and was a part of the integrated arts program, which was incredible. Eastwood has a tradition of putting on a musical every year, and has done so for over 50 years. I started by working on the set painting crew and playing in the orchestra and it was so much fun. While at Eastwood I studied music, visual art and theatre. I realized that designing for the theatre would allow me to experience all of these things, and it was a great combination of my early interests in visual art and performance. By the time I finished high school I knew that designing for the theatre was what I really wanted to do.

How did you get involved with the Shaw Festival?
I first worked at the Shaw Festival as an assistant to designer Charlotte Dean. She was designing a production of A Little Night Music, and I worked with her on the costumes. It was a great introduction to The Shaw, and the following year, director Eda Holmes asked me to design the costumes for the Shaw play In Good King Charles’ Golden Days. The play is set in the 17th century, a time period that has been seldom portrayed at The Shaw, and so it was really exciting to create the costumes of that period with the incredible Wardrobe department. It was the beginning of a great collaboration with director Eda Holmes.

This is actually your fifth nomination for Outstanding Design. What stands out in your memory about the following productions?
– Cabaret (Shaw)
– The Divine (Shaw)
– The Wild Party (Acting Up Stage/Obsidian)
– Tom at the Farm (Buddies in Bad Times)
I really enjoyed all of those productions very much.

Cabaret was an incredible challenge in what director Peter Hinton and I aimed to achieve. The process of figuring out the set design, which was a rotating steel tower made of double helix staircases, was one of the most exciting and difficult project I have worked on. I made four models before figuring it out. I remember one of them totally collapsing after I painted it, the day before I was to present it to the Scene Shop. It was a truly thrilling show to work on.

The Divine was the first time I worked with Jackie Maxwell on a show and I really enjoyed collaborating with her. It was during a year when I designed three plays by the incredible playwright Michel Marc Bouchard. The Divine was commissioned by The Shaw and we did the premiere production. It was a beautiful, poetic play and Jackie and I conceived a design that had to shift from a seminary, to a theatre backstage, to a shoe factory. Designing the costumes for Fiona Reid as Sarah Bernhardt was really satisfying.

I designed the set for The Wild Party with director Robert McQueen, who I have also worked with on many productions. The design was anchored by a small proscenium arch, and inspired by the backstage of a theatre. I love that kind of aesthetic and creating a space that has to evoke many locations and ideas.

Tom at the Farm, one of the other Michel Marc Bouchard plays that I worked on, was such a great contrast to the period pieces I had been doing that season. It is a haunting play, and creating the costumes was gratifying as we were able to really work in a lot of detail and specificity into the clothes, as it has a small cast. We had the time to allow the costumes to evolve during rehearsal. I also had to make fake blood for that show, which was totally fun.

What were the biggest challenges of working on Dracula?
Good segue- The blood!!! Oh, the blood. In the end we actually ended up using it very little. And when we did have blood it was a big, dramatic, over the top moment. Working with blood on stage is always hard, and takes a lot of experimenting, sampling and demonstrating before getting it right. It’s messy. We have to consider how it will work with the costumes, and what costumes might and will get the blood on them, what fabrics they are made of and can they be cleaned over and over again and still look good. It involves people collaborating from almost every department in the theatre.

What sort of research went into the period-specific design?
What is great about a story like Dracula is that it is rooted in the period, the 1890s, but also allows for interpretation, invention and a bit of fantasy and escapism. I looked at the period, its details and characteristics, and then allowed them to influence the design without being too strict about doing an exact re-creation of the era. For instance, in the study of Dr. Seward, we used these enormous wingback chairs. But they weren’t Victorian, they were more of a Hollywood Regency style from the 1950s, and we upholstered them in black vinyl with silver tacks – but somehow they evoked the world and the era. They had an exaggerated and dramatic silhouette which I think suits the story.

Tell us about working with director Eda Holmes to create the look of the world.
Eda and I both have a strong interest in visual art and we began by looking at paintings, photography and films together. The beginning of a design process is so exciting and inspiring because at that point anything is possible. We looked at work from the period of the novel, and also from the period of when the script was written, which was the 1980s. So it was kind of a wild mash up of 1890s references and pictures from nightclubs like Studio 54 that we assembled as our initial inspiration.

Did you have any big ideas that were edited out for practical reasons?
I find that happens naturally during the design process. You discover what isn’t necessary, and edit down to what is really important. One of the things that kept changing was where Dracula was going to make his entrance from. We initially started out with him coming up on an elevator from the floor right at the downstage edge of the theatre – which was over the orchestra pit. We discovered it wasn’t possible to get all of the mechanics into that part of the stage, and ultimately that it was too close to the audience, and having him appear from further upstage allowed us to create a more mysterious looking appearance.

What was your favourite design element in Dracula?
I really liked the silver chain curtains that we had made. We projected onto them, people and furniture passed through them and they emphasized the height of the space. We allowed them to drag on the floor as they moved, and they made such great sound.

Were you pleased with how the design worked in practice?
I think what was successful was how we collaborated as a team. I really felt like Eda, projection designer Cameron Davis, lighting designer Allan Brodie and sound designer John Gzowski were all aligned and working toward the same ideas. It was such a great team and I think as we responded to each other, the ideas got stronger and more cohesive.

Do you have a favourite moment in the production?
Some of my favorite moments were the transitions between scenes. The way Eda staged them was dream-like and they were specifically conceived to keep the story telling going as we moved from place to place. They involved having all of the furniture and scenic elements on wheels, and the cast expertly moved everything so elegantly and evocatively.

What are you doing now/what’s your next project?
At the moment I am in rehearsals with Donna Feore for the Rocky Horror Show and The Music Man at the Stratford Festival, for which I am designing the sets. I am also working on the costumes for a new ballet with Robert Lepage and Guillaume Côté at the National Ballet of Canada and Ex Machina. After that I will be going to Italy to design costumes at the Rossini Festival with Marshall Pynkoski of Opera Atelier. In the fall, I am designing the scenery for the new opera Hadrian, by Rufus Wainwright and Daniel MacIvor, directed by Peter Hinton, at the Canadian Opera Company. It’s a very exciting year for me.