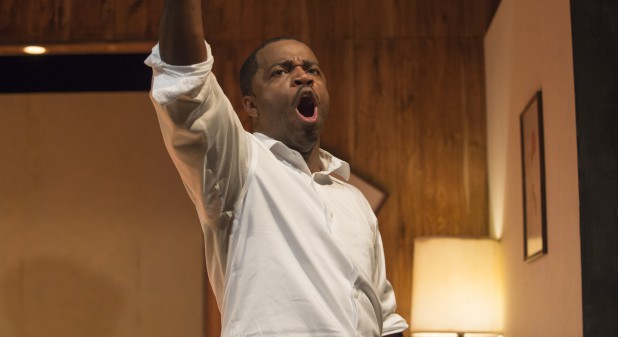 This was a fabulous season for the Shaw Festival. Out of ten productions, there was only one I thought just wasn’t very good (sorry, Juno). Everything else was a mix of the delightful, if common (Arms and the Man, The Philadelphia Story, most things at the Shaw), the astounding (The Mountaintop) and the inspiringly baffling (okay, baffling’s not usually a thing you get at the Shaw Festival but what was up with Cabaret?!). This acting ensemble continues to be top-notch (I have to check for no fewer than 10 names each season to make sure all my favourites are back, and that’s just the top tier of favourites) which keeps the Niagara-on-the-Lake company near the top of the theatre-makers pile, though the directors could stand to be a little bolder.

2. A Lovely Sunday for Creve Coeur

3. When We Are Married

4. Arms and the Man
This simple, sweet Shaw play was all about the particular charms of Graeme Somerville. There were other good performances too, of course: Martin Happer as the buffoon Sergius, Laurie Paton as the conspiratorial mother, Claire Jullien as a seductive maid, though I once again was underwhelmed by Peter Krantz’s overwhelming turn. But it was the degree to which you fell for Somerville’s quiet and pragmatic “chocolate cream soldier” that determined how much you enjoyed this play. I enjoyed it quite a lot.

5. The Sea
The most critically lauded Shaw production of the year came, perhaps predictably, from the company’s most consistently great director Eda Holmes. Showcasing the company’s best young men (including the great Wade Bogert-O’Brien and Ben Sanders, finally escaping the aristocracy) led by one of its greatest veterans (Patrick Galligan in one of the most indelible performances of the year), The Sea was at once a dramatic highpoint of the season and one of the only Shaw productions to use space in anything resembling an interesting way. Holmes and Peter Hinton are my favourite names being tossed around the Shaw Artistic Director debate because either would bring the oh-so-overdue sense of daring to the company. Was The Sea such an achievement as to secure Holmes that spot? Absolutely not. But it may have gotten her a step closer.

6. The Charity that Begins at Home

7. The Philadelphia Story
This highly competent, completely likeable, fairly uninteresting mainstage production was not meant for me. If you see 200 theatre productions a year, and you’ve seen all of these cast members be just this charming and just this grand before, and you’ve seen how beautiful the Shaw’s sets and costumes can be, and you’ve sat in the Festival Theatre (one of the country’s comfiest) many times before, The Philadelphia Story was just another play that was happening in front of you. It was wholly unremarkable and also wholly unobjectionable. I easily invested in Moya O’Connell’s leading lady and her trio of excellently engaging men (the combo of O’Connell and Gray Powell has always worked incredibly well). Everything was pretty and entertaining and just deep enough to hold my interest. And then it was quickly forgotten. If you saw only one Shaw show all season, this might have been a good one to pick, but, if you saw all of them, this one was nothing special.

9. Cabaret
This one, on the other hand, was completely special. It was a once-in-a-generation adaptation. Dark and moody and metaphorically rich; one of those shows you leave and spend the next hour debating what everything meant (the leading theory amongst my group was “the clown was a metaphor for Germany” until we ran into the assistant director at Balzacs and he informed us that he was meant to be the Emcee’s “familiar” like a witch might have a cat). Director Peter Hinton did what nobody (other than Peter Hinton) ever does at the Shaw Festival- he swung for the fences. I love that he swung for the fences. I loved a few other things too (Ben Sanders as the sad clown, the Emcee’s words coming through Gray Powell as Cliff like a puppet in the show’s final moments) but mostly I loved what Hinton tried to do more than what he actually did. He was bold and brave and attempted to make something artistically interesting even though he likely was warned a thousand times that the Shaw subscriber base “wouldn’t get it” (hell, I didn’t get it, and I’m notably not a 65-year-old retired school teacher; though perhaps I am at heart). In theory, it was my favourite thing all season. In practice, it was Cabaret (possibly my least favourite musical in the whole world) starring Deborah Hay (notably not a favourite) and Juan Chioran (notably not a favourite); it could have been directed by a theatrical genius (perhaps it was), I was never going to like it all that much.