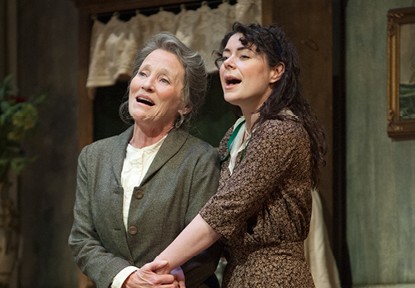 At the Shaw: Haney and the Accents

Juno and the Paycock suffers from a simultaneous case of too much plot and too little, issues that do, counterintuitive though it may be, go hand in hand. Upon reading Belfast-raised Jackie Maxwell’s director’s note, I was intrigued by playwright Sean O’Casey’s Irish civil war drama. Unfortunately, the moments of war-torn tension and aching loss that make up the emotional heft of the play take a confusing back seat to plots about love and money that aren’t compelling enough to be more than a distraction. Theme-wise, Juno bears a strong resemblance to Rifles (last seen at the Next Stage Festival starring the great Kate Hennig) though, perhaps by virtue of being a one-act, that production is able to look at its central matriarchal figure with laser focus rather than splitting the audience’s attention with silly drunken rants and the cooking of sausages.

Though Marla McLean delivers one of the production’s best performances (as McLean is wont to do), the travails of Mary Boyle take up story space I would much rather have seen taken by the grossly underwritten character of wounded Johnny (a single scene between Charlie Gallant and Kyle Golemba as an unnamed man in a trenchcoat is all the play gives us to emphasize the “Free-Staters”’s unrelenting claim on Johnny in the name of Ireland). The character of Joxer (played by an unintelligible Benedict Campbell) is the greatest offender, acting theoretically as a symbol more than a character but in practice just belligerently wandering through the more interesting action (the unnecessary inclusion of the text’s senseless final scene seems to quadruple Joxer’s damage). The delusions of grandeur and fall from hope that come to the Boyle family after the announcement of an impending inheritance is a worthy enough story but it feels remarkably trivial in the shadow of Johnny’s missing arm. There are simply too many things going on here and it’s therefore impossible to really delve into anything the way that they absolutely need to be delved into.

The general sense of hubbub is not aided by the collective struggle against the characters’ thick Irish accents. Powerhouse matriarch Mary Haney aside, only McLean comes close to maintaining the dialect intelligibly. The Shaw Festival is a den of accents so at some point you force yourself to stop yearning for the nuance of a performance without one (it really is like tying someone’s hand behind their back- they may still achieve greatness but it takes a lot more out of them). Because they do them so often, nearly every Shaw player has a pretty ace English accent up their sleeve. This is not so much the case with Ireland. Half the lines are swallowed completely, the rest are distractingly garbled and everyone’s face scrunches up in concentration when they have to pronounce “tea” as “té”. That doesn’t take away Gallant’s quiet moments of tragedy or prevent Andrew Bunker and Gord Rand from being opposingly charming, and it certainly doesn’t stop Haney (especially when it comes to her big monologue in what should be the play’s final scene) but it does drag everything down dramatically.

There is very little interpretation or artistry in this production- it’s simple, straightforward, true to the text exactly as written in 1924- and my years reviewing the Shaw Festival as run by Jackie Maxwell have forced me to be okay with that. The problem is, that only works when two things are great: the text and the performances. O’Casey’s text is over-crowded and consequently shockingly shallow considering its subject matter and the challenging accents block out most of the performance power, pretty much just leaving Mary Haney out there on her own.