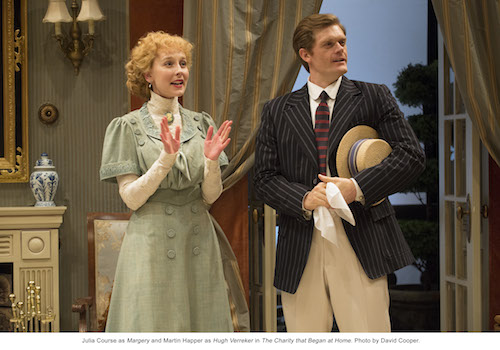 At the Shaw: The Charity that Began at the Shaw

This is a very good season for The Shaw Festival. There isn’t a single truly bad production in the lot, Cabaret is making a splash, and The Mountaintop is a strong dramatic achievement. Among the more standard fare, Juno & the Paycock leaves something to be desired but everything else ranges from fairly to thoroughly charming. Perhaps the quintessential example of that is The Charity that Began at Home, a funny and sweet early-twentieth-century exploration of drawing room philosophy that is, despite having not been written by GBS, very “Shaw”.

Here is where I would normally insert my standard complaints that- Peter Hinton and Eda Holmes aside- no one at the festival ever seems to bother to put any sort of interpretive thought into anything. The Charity that Began at Home likely looks exactly the same now as it did in 1906 and, considering the universality of its themes and the Shaw’s rapidly ageing subscriber base, that’s a serious missed opportunity. However, I will limit my diatribes to just those few sentences because, though it lacks innovation and it stands zero chance of connecting with any non-theatre-nerd under 50, The Charity that Began at Home is quite delightful.

St John Hankin’s play is a funny, intriguing little text with a balance of silly, throwaway characters (Jim Mezon’s long-winded General Bonsor and Donna Belleville’s detestable Mrs. Horrocks come to mind) and more ambiguous, enticing characters who thankfully get a lot more stage time than their inferiors. Fiona Reid, as the amusing matriarch who takes philosophical advice too seriously and invites a lot of unlikeable people to stay at her house, delivers the sort of Fiona Reid-y performance that is both extremely effective in the moment and somewhat tiresome to anyone who has seen a lot of Fiona Reid lately. But everyone in this production delivers something of an expected performance; it’s just lucky that they are all cast in roles where what’s expected of them is effective. Julia Course as Reid’s saintly daughter does what Course does best with potentially irritating ingénues and plays Margery as savvy and grounded. Graeme Somerville brings the natural gentleness and intriguing intellect that permeates most of his performances to the key but unfulfilled character of Basil Hylton (a role well served by gentleness and intellect). At first the dashing character of Hugh Verreker seems to be using Martin Happer for his strong jawline and easy charm but as act two progresses he begins to make demands of the actor’s subtlety and character insight to the point of playing a surprisingly complex emotional arc (not unexpected from Happer, unexpected from this particular play).

Ultimately it’s Hugh’s journey towards a singular selfless act that makes The Charity that Began at Home more than just an amusing tale of manners with some larger questions about how we should treat others. And since former artistic director Christopher Newton didn’t show up to play, he’s awfully lucky he had Happer and his cohorts to come up with the winning RBIs.*