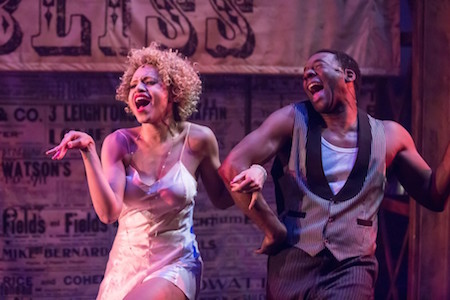 On Stage in TO: The Politics of Political Theatre

In Acting Up Stage/Obsidian’s current production of Michael John LaChiusa & George C Wolfe’s gin-soaked narrative poem The Wild Party, two principal roles always or often played by white actors are being played by black actors. This one choice has dominated the majority of the conversation around the distant but moodily effective production. How does Daren A Herbert’s dark skin inform his character Burrs’ inclusion of blackface in his clown act? Does the casting affect his power dynamic with the other (white) men who come to his party? Are the politics somehow changed? Is Acting Up Stage sidestepping a scandal by casting a black actor in the blackface role so they can do the potentially controversial show they want without enduring a barrage of editorials?

The answer to those last three questions is, to put it simplistically, yes. But the answer to the first is far more complicated. Theoretically, this casting places Burrs into an interesting contrast with Queenie and her skin-lightening makeup. As one of them is lightening her face to erase the thing that makes her an outsider, the other is embracing it, playing into the stereotype to a) advance his career and b) ease the pain of being mocked by getting in on the joke. This particular take on The Wild Party’s themes of alienation feels deeper than what’s on the paper and I’m all for any decision that creates more casting opportunities for Daren A Herbert (undoubtedly one of Canada’s greatest musical theatre performers). The trouble is that Burrs is a character beyond his decision to perform in blackface and that character is aggressive, crude and dangerous, none of which are qualities without tragic associations for the black community in how unfoundedly quick our culture is to associate them with, specifically, young black men. I’m not convinced that Burrs, as written, is a portrayal of a young black man that we need or want on stage, especially as he stands in contrast to the refined and good, but dramatically white, Black (played with irresistible charm by Dan Chameroy). I’m all for casting actors of whatever race in almost any role (I’d frankly rather see Daren A Herbert than just about any of the major white musical theatre performers around- why can’t he be Captain von Trapp? Is there a rule that the Irish guy in Once has to be white? I’m pretty sure they have black people in Ireland) but this casting almost seems to fall backwards into a stereotype that’s not actually there in the text. It’s a miserable coincidence that undermines what could have been a very fruitful casting move.

Pleiades Theatre’s current production The Sound of Cracking Bones is an “issue play”. As written by Suzanne Lebeau, as directed by John van Burek, and certainly as overdramatically performed by Harveen Sandhu, Patricia Cano and Caity Quinn, this memory play about child soldiers is more of a public service announcement than a piece of actually interesting artistic output. We all feel like good people for having attended, paid for, shared or supported such a well-meaning piece of message-laden storytelling, and we all feel terrible that such treachery exists in the world, but we’re left with no call to action, no moral quandary, no personal connection the characters (because they are such broad constructions; strange considering the director’s note claims the intention was “unavoidable realism”).

Pieces like The Wild Party strive- though they admittedly sometimes fail- to say something more than the text says, stir up some political tension with casting or direction. But The Sound of Cracking Bones’ agenda is all right there on the paper (though it was originally written in French and is being performed in the original language at some performances; perhaps the un-translated version is more subtle?)- it’s a political text, not a theatrical one.