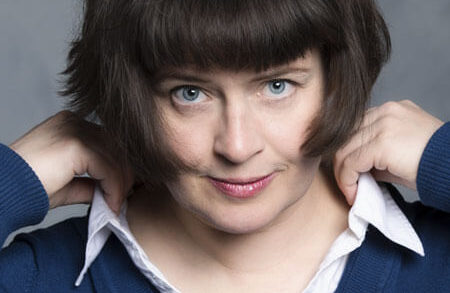 The charming and candid Marion Day gave a lively, versatile slew of performances in The Shaw Festival’s awesome production of Micheal Healey’s new political comedy 1979, a short, tense, hilarious fictionalization of one key night in Canadian history. Nominated for Outstanding Supporting Actress, Marion approached each of her many roles (men and women of varying ages and legacies) with inspiring patience and humanity, including one particular character whose problematic politics made that a particularly challenging task.

Do you remember your first experience with theatre?
Lights and dry ice. I was tiny. Last week I saw Maja Ardal’s incredible One Thing Leads to Another, (a play for people three months to 18 months old) so I feel newly all right in saying that. Sensory stimulation counts!

Do you have any dream roles?
No. I am micro-ambitious.

What drew you to 1979?
When I heard about it: Eric Coates and Michael Healey and Shaw. After I read it, I just wanted to play that script. Michael Healey’s writing: you can acquire more facility over time with it, discover its different levels but you can’t wear it out, there’s no end point. The more time you spend with it, the more deeply rewarding it is to play.

In both shows you did at the Shaw last season, you played multiple roles. What are some of the challenges of flipping between characters like that?
The flipping is fun; it’s kinesthetically satisfying and gets me out of my head. Every character gets a sweet short arc. The challenge for me is that I am challenged by real-life things, like “first pants, then shoes.”

The characters in 1979 are all real people. When crafting your interpretation of each of them, how much was mimicry vs. imagination?
Eric and Michael were very clear they wanted something that wasn’t impersonation, a style just for this script we would find on our feet. Michael referenced playing, like when you pick up a script, or when you’re a kid, and say “I’m this guy now!”. There was no pressure on us to impersonate. No one has to “believe” I’m any of those people, I’m me-and-them. I’m grateful for photos and audio, to start me away from my everyday self. Jennifer Goodman’s costumes beautifully walk that line of real and not-real.

After we closed, I had a big old ugly cry over not getting to wear male and female suit drag anymore because it gives superpowers I can’t translate into the real world.

You played one of the more polarizing figures in the show, in the only scene that was completely fabricated. Tell us about Young Stephen Harper and the challenges of playing someone still so much in our national consciousness.
I don’t know to whom you’re referring.

For real, though. As soon as I read the script I Ctrl+F+replaced his name to reduce personal baggage. I asked if we could just call him Young Steve while we worked and everyone was kind about that. So he and Joe are in those moments, and that’s all. Michael’s performance of Old Steve in Proud was so lovely; there’s no point in imitating it, though I often think of it. I love that Michael has now written from that person in three different ways. That’s some layered work of weird empathic love right there.

Tell us about working with director Eric Coates.
Eric is my real-life sweetie. We met at Blyth, where he was the AD for years, facilitating new plays. Eric gets me; we can share shorthand. Eric meets actors where they are, and he always adapts his communication to them, so for me, he provides boundaries and encouragement and structure. His room is fun and immediate. He’s a mover himself, so he knows I’ll love a kinetic prompt, something physical. He gives me rules of play, so I can let go of responsibility and just run. He has great left-field. One day he just said, “maybe [character] has a small mouth”, and I was like “oh my god thank you, solved.” And he’s a researcher, so we got to have months of being surrounded by stacks of Canadian political books.

Were you in touch with playwright Michael Healey at all throughout the process?
ATP was one week ahead of us in their process, working on the same play. We got to have Michael like a part-time Dad, and we wanted him to like us best. (He did not play that game). We got to be there for his script adjustments in real-time, which is a favourite thing about working on a new play, hearing him adjust rhythms and make decisions.

Do you have a favourite moment in 1979?
Yes, it’s the very top of the show, I’m not onstage, but my colleagues are: Sanjay Talwar and Kelly Wong. I spy on it when I can. It’s audacious writing; the guys hit the ground running, the tech and staging elements all fire at once; a blast-off moment. That’s the last time I can be sitting back picking up flavour of the night. After that, there’s no time for reflection.

Tell us a little bit about Wilde Tales and your experiences interacting with the kids for that show.
My first years in theatre and my ambition (I had one) after theatre school was TYA, I have roots in that and big feelings about it, what beautiful work can do. The only part I was worried about on Wilde Tales was the decision to integrate kids into the show, and having had that experience; I would only want to do TYA with participation, now. The Shaw season sold me on it as a practice. It took a lot of time and care for Christine Brubaker and for us to work out, to scaffold, so that the kids are respected and comfortable and safe, and that’s fine. It’s more than worth it.

What are you up to now/next?
The Baroness and the Pig, by Michael Mackenzie, based on characters created by my working partner Catherine Fitch and me, is on at the Shaw this year.

Personal side projects: one on non-violent communication, one paper/digital called 1968 (no connection to 1979.)

Do you have anything you’d like to add?
I don’t want to give it away, but there is a sort-of virtual fourth player in 1979, made possible in our production by Stage Manager Allan Teichman. For years I knew him as head of CAEA, but now I feel as if I’ve gotten to play with him. In Wilde Tales, he would sit and help the kid who needed extra time to make a flower. I am so grateful for the people I get to know.

Shout out to [1979 co-stars and fellow nominees] Kelly [Wong] and Sanjay [Talwar]!