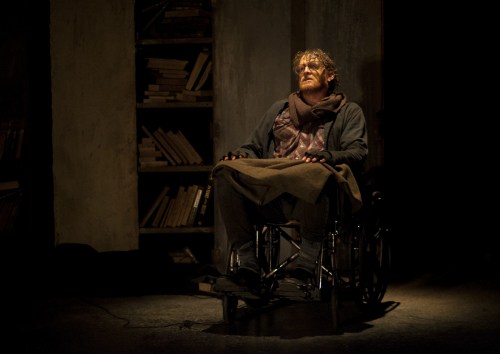 Set in a dystopic future post-war landscape and based on T. S. Eliot’s Wasteland, Bloom is a story of an old war veteran, Gerontion (Peter Farbridge), a young boy who lives with him (Liz Peterson), and Maria (Kim Nelson), a woman who haunts his memories. The story centers around Gerontion in old age, dealing with his infirmities and loneliness, but also the unresolved history of the war that continues to form the landscape of his mind.

The stage is mostly bare, with Gerontion at the centre in his wheelchair, framed by a small counter with a lamp off to one side, where some flashbacks play out, and by walls covered in canvas, onto which Anahita Dehbonehie’s excellent video designs are projected, displaying flashes of images permeating Gerontion’s mind. I especially liked this effect, as it drew the audience into the kinds of episodic flashes of half-images that penetrate the central character’s consciousness.

The narrative depicts a familiar story: the more we run from the past, the faster it catches up with us. So familiar as to be cliché, maybe, but a story that seems particularly relevant, on both personal and political registers.

Depictions of those suffering from trauma, and the ways that events that took place decades ago are still palpable and unresolved is not an easy sort of state to illustrate, and this is a fairly impressive attempt. Invoking the richness of Eliot’s poem works well, since the play isn’t trying too hard to recreate the poem, or to be clever with it, but references the imagery in a way that opens up new richness and possibility.

On the political side, war is not just in our past: anxieties about dystopian wastelands are beginning to loom large as policies controlling climate change continue to be revoked, while the consequences of Trump’s upcoming meeting with Kim Jong Un are unpredictable at best, not helped by the recent appointment of Bolton as National Security Advisor, a man for whom war constitutes something approximating a wet dream. Worries that have long been abstract are quickly becoming startlingly concrete.

Yet, despite the relevance and poetic style of the script, I was surprised at the way the production left me a bit cold. It’s hard to put my finger on why – the cast is strong, but doesn’t evoke the kind of emotional resonance that I would expect from this kind of story. Maybe it’s the chemistry between the actors that was lacking, or the meta-theatrical tone of the production, but the emotional stakes were missing, and while I was intellectually engaged, I was left frustratingly unmoved.