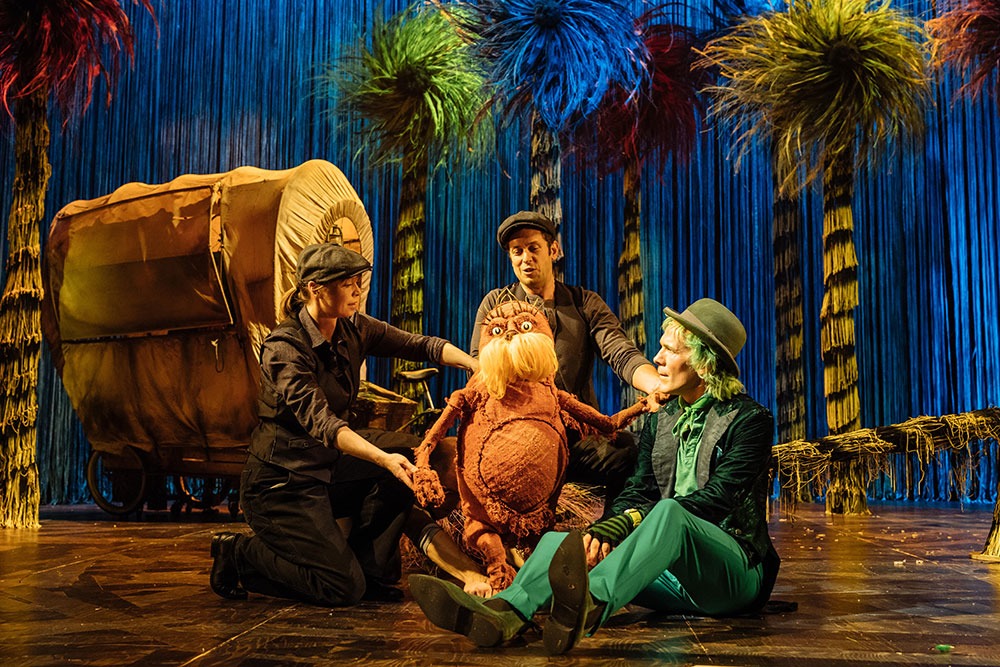 Dr. Seuss’s Lorax Comes to Life at the Royal Alex

Rightfully branded as a family show, The Lorax is a feast for the senses, and enjoyable for adults and children alike. Straight from London’s The Old Vic, this stage adaptation (David Greig) is carefully directed (Max Webster) beat by beat, taking us on a metaphorical journey from industrialization to late capitalism. I believe this production will inspire a lot of children to reconsider our dependency on unnecessary items that clutter our lives – just like the useless “Thneeds” created by the protagonist Once-ler (Simon Paisley Day) by knitting the harvested tufts of the beautiful truffula tree found in “paradise.” Unfortunately, greed and kitschy marketing leads to a lot more than the original deforestation plan of a small section of land. As for adults, we may gain a fresh prospective or reinvigorate our existing views on environmental issues and sustainability by taking a (fantastical) trip down memory lane to the origins of capitalism.

What I enjoyed most are the details in every aspect of this production. The exquisite design (Rob Howell) features green clothing worn by each member of the Once-ler family (green shoes, green boots, green slippers, green stockings, green tights…you get the point); and the vibrant warm palette of the trees which move as if dancing with personalities of their own, making their fate all the more bittersweet. Sadly, we see them slowly deteriorate making the final scene – which I cannot give away – all the more magical. The Lorax itself (Nick Barnes and Finn Caldwell) is magnificently voiced by David Ricardo-Pearce alongside a team of puppeteers, using great specificity, for instance, crossing its knees while listening to Once-ler’s Thneed elevator pitch, while simultaneously tapping a furry hand and leg. Without a doubt, the stage is beautifully lit (Jon Clark). In fact, it’s dizzying at times, resembling something between Fantasia and The Lion King, but totally worth it.

The performances themselves were also multi-faceted, most cast members doubling as musicians or puppeteers.   Too many to mention but mommy and daddy Once-ler were unquestionably dedicated to their roles (Kirsty Malpass and Joe Alessi) as was granny Once-ler (Wendy Mae Brown). Now Brown eventually breaks out as part of a singing trio, which is helping to celebrate the incredible growth of the business complete with a new factory. Her voice is so powerful she upstages the entire cast – the Beyoncé of Destiny’s Child is what I thought to myself. However, I found myself asking how this Dreamgirls-like scene fit into the rest of the show’s style. More concerning was the character Small Ed (Michael Ajao). While Ajao does not lack any acting chops, his character is a fool, introduced as someone who steals Once-ler’s place because he is poor, and needs a place to live and work. Later on he becomes an assistant to Once-ler. And then a rapper too. In one dark stage image – when the animals are about to stage a protest – he is tied up with an orange in his mouth. See the picture? While the fool archetype is not synonymous with stupid, Ajao is a man of colour who appears to sport a fake Afro wig. I felt he was completely tokenized. I would be concerned with how young children may subconsciously view people of colour. This seems to be a peculiar casting choice given the issue of diversity in theatre. Maybe the context is viewed differently in British theatre.

All in all, The Lorax is an evocative piece of theatre and worth seeing, whether you have kids to go along with or not. The Mirvish production plays at the Royal Alexandra Theatre until January 21st.