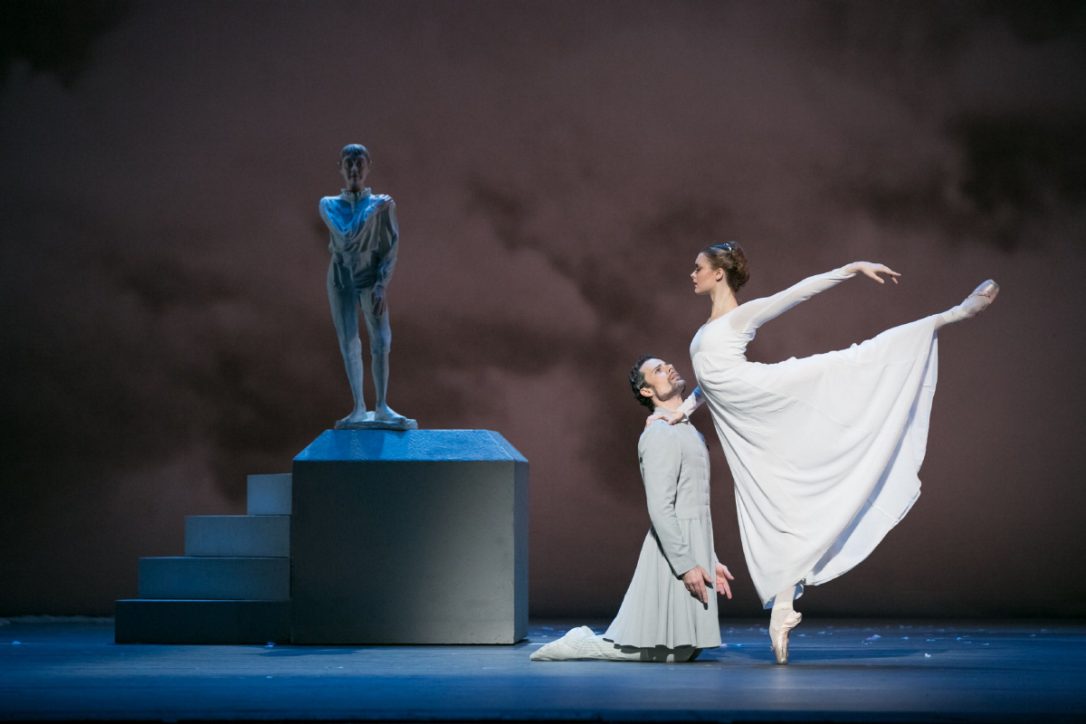 Featuring vivid characters and a dramatic story of jealousy, love, and redemption, The National Ballet of Canada’s adaptation of The Winter’s Tale is a beautifully choreographed, magical ballet that absolutely everyone should see at least once.

Like the Shakespeare play on which it is based, the ballet opens with Polixenes, King of Bohemia, visiting his childhood friend Leontes, King of Sicilia, and Leontes’ pregnant wife Hermione. A spark of jealousy convinces Leontes that his wife has been unfaithful and that she is carrying Polixenes’ child. Imprisoned by her husband, Hermione gives birth to a daughter, Perdita, who is secreted away before Hermione stands trial. Despite Hermione’s pleas that she is innocent, Leontes refuses to believe her and the shock kills first their eldest child and then Hermione herself. Only after her death does Leontes realize that he has made a terrible mistake. Sixteen years later, Perdita, who has been raised by a shepherd, falls in love with Florizel, but her lowly status makes their match unsuitable. Leontes receives a chance for redemption when the young couple, pursued by Florizel’s father Polixenes, flee to Sicilia for mercy.

Christopher Wheeldon’s choreography bridges the gap between classical and contemporary, creating a piece that feels fresh. Instead of resorting to old fashioned ballet mime prevalent in classical staples like Swan Lake, Wheeldon uses movement and lighting to convey thought and theme. Most effectively, he depicts the creeping jealousy that infects Leontes through sharp contortions of the dancer’s body and spidery fingers, highlighted by the choice of sickly green-hued lighting.

Setting is largely shown through projections and silk effects, which (without spoiling anything) result in undoubtedly the best “Exit, pursued by bear” that I’ve ever witnessed. Act II features a glistening tree so beautiful that it made the audience audibly gasp and burst into applause. Vibrant jewel-tone costumes in contrasting warm and cool colours separate the two kingdoms of Bohemia and Sicilia, while pastels are used in the rural spring scenes.

In the theatre, a role is typically played by a principal actor or actress, and sometimes understudied by one or more cast members in case of illness. Ballets, on the other hand, have multiple casts, with between two to five dancers alternating a role at different performances. The result, particularly in a story ballet which requires more acting, is that every audience will take something different away from a performance based on what each dancer brings to a role.

The National Ballet of Canada is such a gifted company of dancer/actors that fans of the company may have trouble deciding which cast to see. I was fortunate enough to catch two of the four casts performing The Winter’s Tale this season, and yet wished I had the time (and the budget) for a third. Both casts were excellent and yielded unique takes on their respective roles.
On the nights I attended, Piotr Stanczyk and Evan McKie offered two equally valid, but completely different portrayals of Leontes. McKie plays Leontes’ jealousy as a feeling that threatens to overwhelm him, yet he has doubts and it takes him longer to succumb to the green-eyed monster than the quickly afflicted Stanczyk. He also has a different take on the madness. His Leontes doesn’t so much laugh as fall to the floor half-sobbing, as if in the midst of a nervous breakdown. Where McKie excels most is in the third act where his remorse is palpable. His final duet with Hermione is beautiful, but it was Leontes’ touching reunion with daughter Perdita that brought a tear to my eye.

Piotr Stanczyk offers a mesmerizing and altogether darker performance. In contrast to Evan McKie’s fluidity and gorgeous lines, Stanczyk has a more compact physicality and performs the choreography with sharp, quick, decisive movements. I was particularly awed by his performance in Act I, where the spark of jealousy strikes- once his Leontes suspects Hermione of infidelity, his conviction is unshakable. When Leontes looks at Hermione and Polixenes together, it reinforces his belief and drives him further and further from sanity. It’s an intense, and at times chilling, performance that captivated me from start to finish.

Xiao Nan Yu is the perfect match for Piotr Stanczyk’s Leontes. Her Paulina does not lack for vulnerability, yet she’s firm, matching his power with her own considerable strength. In contrast, Svetlana Lunkina’s take on the role is more servile.  She’s devoted to and clearly has a deep bond with Hermione, yet her Paulina is always aware of her position within the household. This results in a Paulina who shows restraint in her dealings with Leontes out of deference for his position. Lunkina appears more depressed than angry about Leontes’ treatment of her mistress. It’s an understandable choice, but I preferred Yu’s power when Paulina rails on Leontes with her fists.

In one of the more forgettable roles in the ballet, both Harrison James and Brendan Saye impressed as Polixenes, throwing themselves into the steps with abandon.

Hannah Fischer, a new second soloist when she made her debut as Hermione in 2015, has matured into the role. Her dancing is more assured, and she brings an increased focus on Hermione’s emotional journey to the part. Fischer is lovely to watch, demonstrating dignity and wounded pride throughout the arrest and trial scenes, combined with a dawning horror about the change that has come over her husband. Her long lines and pathos combined with Piotr Stanczyk’s intensity make them a sight to behold. Although she ultimately forgives Leontes, there’s a reserved quality to her Hermione that suggests she will not soon forget everything that’s happened.

Principal dancer Jurgita Dronina, is a mindful and responsive ballerina. Always present in the moment, she reacts to what’s occurring in each scene around her in an organic way. Although her Hermione is wary and self-preserving, the character’s royal blood comes through in the dignity and poise she displays in front of guests. Dronina is achingly beautiful in the trial scene, as she proclaims her innocence, and her final duet with Evan McKie‘s Leontes is exquisite, as his remorse wins her over. Dronina brings to The Winter’s Tale a remarkable ability to create believable chemistry with literally anyone. The bond between her Hermione, Leontes, and Polixines (Brendan Saye) is incredibly strong, making it even more difficult to see their relationships fracture. She also has a sisterly, or perhaps maternal, connection with Svetlana Lunkina’s Paulina, and Hermione’s reunion with daughter Perdita (Rui Huang) is deeply affecting.

As Perdita, Jillian Vanstone is the personification of joy. Playful and charming, you can see exactly why Florizel is so taken with her. Vanstone and Naoya Ebe (Florizel) are often partnered and it shows. There’s an ease and chemistry between them that’s well-suited to the narrative of a young couple in love. Rui Huang plays a subtler Perdita, without the exuberance of Vanstone’s portrayal. There’s a lovely quality to her movement, and I enjoyed the familial moments with Robert Stephen‘s Brother Clown and Jon Renna’s Father Shepherd very much.

Francesco Gabriele Frola’s Florizel is technically impressive. His circuit of jumps is thrilling, achieving incredible height and drawing spontaneous applause from the audience, but I found his chemistry with Rui Huang’s Perdita to be lacking. Their Florizel and Perdita came across more as a couple who had been dating for a month or so and liked each other, than the passionate teenage love I expected from a pair about to be engaged. Their partnering started out a little shaky, but quickly stabilized; it was the emotional connection between them that I never felt. To be fair, Huang was filling in for injured Elena Lobsanova, so the lack of connection may be attributed to a new partnership and lack of rehearsal time together.

In the smaller role of Brother Clown, the reliably excellent Dylan Tedaldi stole the show. It’s difficult to take your eyes off Tedaldi whenever he’s onstage and this performance was no exception. Quick and playful, he makes it look easy. Friday night’s Robert Stephen was also a standout in the role, partnering the enchanting Tina Pereira as Young Shepherdess.

One of the reasons why The Winter’s Tale is so fun to watch is that it provides an excellent showcase for the National Ballet of Canada’s talented corps de ballet. In both the sensual party dancing of Act I and the pastoral frolic of Act II, the corps has a chance to perform dazzling choreography. I found Meghan Pugh a joy to watch both nights and, in the Friday evening performance, I noticed new corps dancer Siphesihle November’s beautiful lines, and Calley Skalnik’s spirit.

The Winter’s Tale remains one of my favourite ballets within the National Ballet of Canada’s repertoire. An excellent first ballet for potential new fans of the art form, I highly recommend catching at least one of the talented casts, if not more, should it return to Toronto stages.