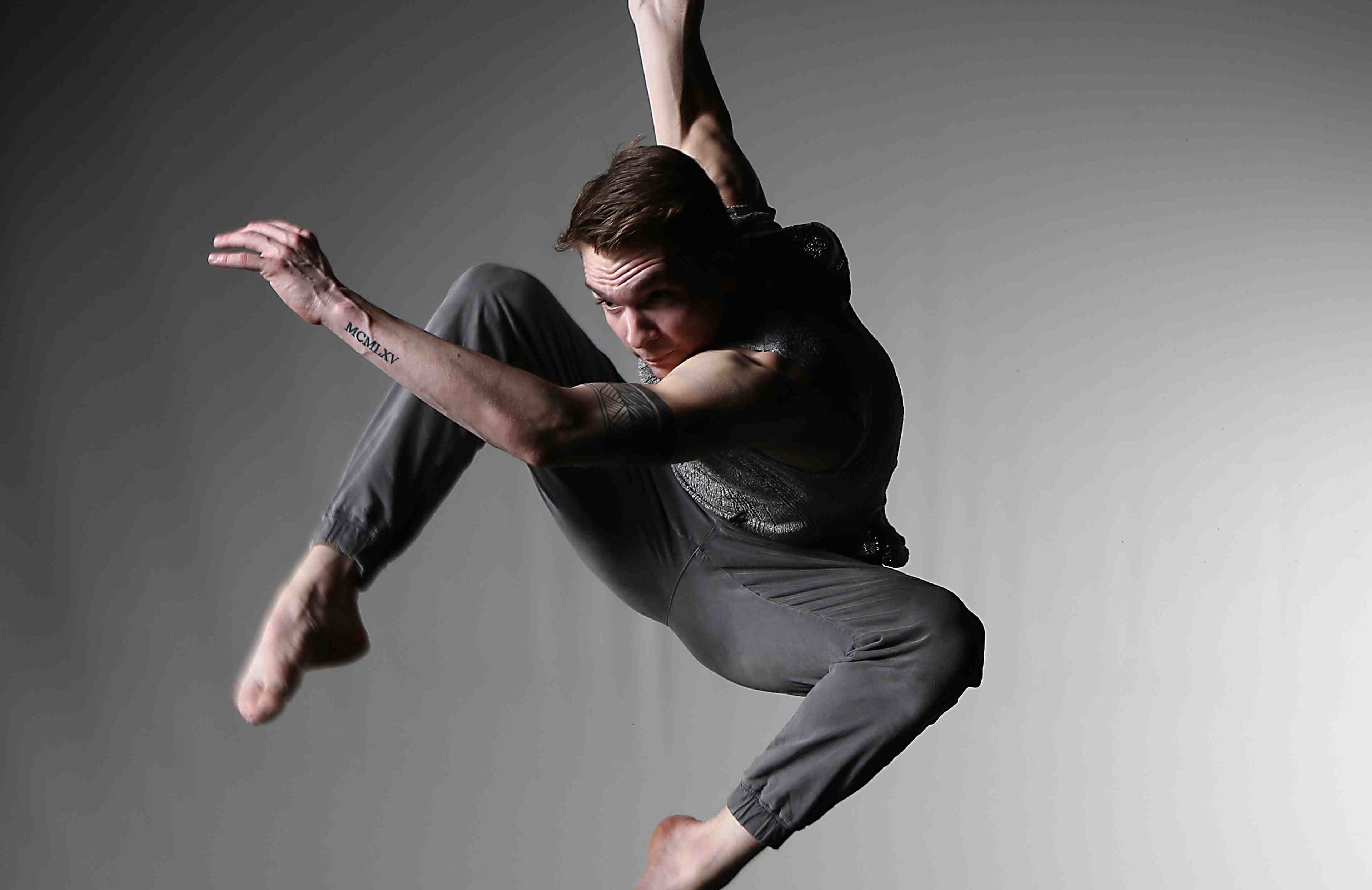 The fourteenth season of ProArteDanza, on November 1-4 at Fleck Dance Theatre, Harbourfront Centre, offered 3 World Premieres by choreographers Kevin O’Day and Matjash Mrozewski. This season’s offerings are resonate and current, boldly combining dance, text, and theatre with a self-assured confidence that is authentically relatable.

Inspired by Naomi Klein’s book This Changes Everything, and our “collective inability to rise to the challenges we face in terms of climate catastrophe” (program notes), Matjash Mrozewski’s Future Perfect Continuous impeccably captures our collective anxiety-fuelled zeitgeist.

A single performer (Anisa Tejpar) is already on stage as we enter, waiting patiently for us all to find our seats, though as latecomers arrive and time drags on her movements become anxious. The lighting and her plain costume hint at a post-apocalyptic time frame. A second performer (Daniel MacArthur) occasionally ambles across the stage with a large bright yellow balloon in tow, eventually he addresses the audience to perform the ritual of pre-show etiquette reminders, and we all settle down.

Future Perfect Continuous combines 2017 Governor General’s Literary Award nominee Anna Chatterton’s provocative text, delivered by the dancers, with a movement language so kinetically matched to the words that at times the relationship between the spoken elements and the dance seem effortless, though, occasionally the delivery of the text outshines the movement and the dance fades into the background. The topic is environmental degradation, and what, if anything, we can or are willing to do about it. Platitudes are offered, and a false dichotomy between slacktivism versus science denialism emerges. The text perfectly captures this existential millennial moment in all of its lazy hopefulness/hopelessness.

The yellow balloon reappears late in the show, MacArthur brings it back onstage after a candid discussion with dancer Victoria (Tori) Mehaffey in which he talks over her when she brings up her concerns about climate crisis. As Mehaffey tries in vain to be heard, MacArthur comments on how “serious” she is being, explains that she usually smiles more but that the show creators gave her such a negative topic to discuss. It is unclear to me if this moment, where an older male performer talks over and mocks a younger female colleague (going so far as to insinuate that she should smile more) is offered ironically or not.

When the yellow balloon reappears, the entire ensemble chases MacArthur around the stage trying to capture it. It is like the balloon is a beacon of optimism and everyone wants a piece. However, because it is MacArthur who is the keeper of the balloon, and he has been offering empty platitudes and scoffing in response to the climate concerns spoken by the other performers, the yellow balloon of optimism can easily also represent ignorance.

The climax of the piece has Caryn Chappell stand up from the audience and make her way to the stage delivering an earnest rehashing of the shows text, taking the fragments spoken by other dancers throughout the work and performing it as an affectively emotional monologue. I am sitting among a large crowd of Ryerson dance students in the audience, they all agree at the end of the piece that they were moved to tears.

Choreographed by Kevin O’Day and performed by Johanna Bergfelt and Robert Glumbek, this work was beautifully melancholic. Bergfelt and Glumbek are the dancers we all dream of growing up to be, graceful, confident, demonstrating a maturity at ease on stage. The piece conjured images of both sorrow and comfortable companionship, a reckoning of time lost or lives lived.

Adjusted Surrender begins with each dancer shedding physical, and perhaps metaphorical, layers. Glumbek wears a pile of panama and fedora type hats on his head, he removes them one by one and places them on the stage. In turn, Bergfelt unfurls herself from a voluminous white dress created by lengths of stiff material, so that when she finally slips out of the bodice the dress and its volumes remain standing sculpturally on the stage.

The dancers move together, and while there is a familiarity between the characters, there is also tension. Bergfelt occasionally punctuates the flow, striking Glumbek with a sharp clap to his body. They push against each other as much as they release into one another.

The ending is wistful, it could be this was all just a fantasy of what could have been.

The stand out element of this work is its musical accompaniment. Toronto’s Lemon Bucket Orkestra provides the soundtrack for this high energy piece choreographed by Kevin O’Day in collaboration with the ensemble.

The costuming and Balkan-Klezmer polyphonic sound scape conjure images of old world village life. The dancers are loose and weighted in their bodies, wearing socks so that they slip and slide through the movements and blend phrases together. The program notes describe the piece as being about the celebrations of life: birthdays, funerals, marriages, ect, and the performance does have the feel of a never-ending street festival. There were the fun parts and the upbeat parts, but there was also a scene where a group of drunk men chase and attempt to grope a single women around the stage… and yeah, that is a true thing that long and late parties can devolve into, but in a post #metoo world maybe we could leave the playful misogyny out of our art?

By the end of the piece I think we are all feeling a bit punch drunk, there is certainly a Margot at the Wedding hazy dreamlike quality that lingers after the performers take their final bow.