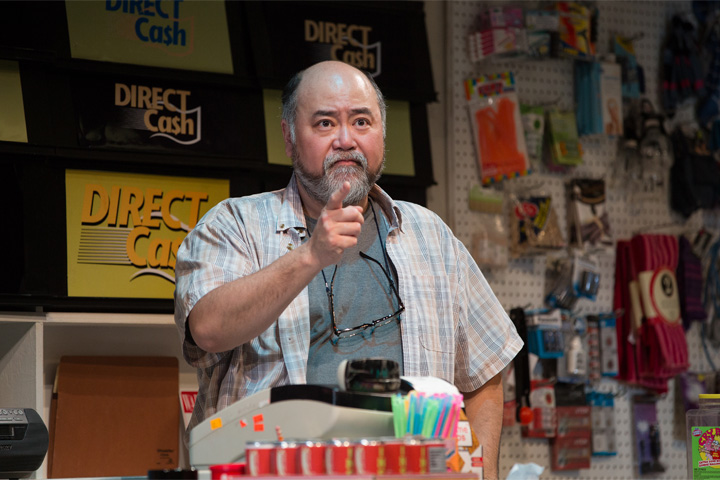 Immigrants. Gentrification. Two subjects that are inescapable when living in New York City. Sometimes it’s easy for New Yorkers to think we have the monopoly on them (as we like to think we have a monopoly on everything). But the Torontonian theater company Soulpepper proves otherwise with Kim’s Convenience, which handles heavy issues with sharp humor and heart.

The play follows Mr. Kim (the brilliant Paul Sun-Hung Lee), the owner of a convenience store in a rapidly gentrifying neighborhood. Mr. Kim had always planned on passing the store on to his family, but his son has been estranged for years, and his daughter has no interest in running the store. When someone offers to buy the store from him, Mr. Kim is forced to reevaluate his idea of his legacy.

It sounds very heavy, but mostly, it’s not. It’s a family comedy fueled by generational differences, and more specifically, the difference between 1st generation immigrants and their children. And unlike the majority of comedies featuring minorities, it feels like the audience is laughing with the Kims, not at them, which is refreshing. Which, honestly, is the only way to make minority-based comedy. People might complain about PC culture and how it’s killing comedy by making certain topics off-limits, but Kim’s Convenience shows that it’s possible to touch on controversial subjects and be funny, without reducing an entire group of people to being the butt of a joke. It shows that the best way to humanize minorities is to tell their stories. No one in the Kim family is perfect, but they are all relatable in one way or another.

The show is incredibly topical, and as mentioned, touches on gentrification and the lives of immigrant families (Mr. Kim and his wife are Korean immigrants).  Gentrification is what kicks off the story. And the fact that the Kim parents are immigrants inevitably shapes their world view. (For example, racism within the Asian community is touched on. It’s a sensitive topic, but it exists, and the show includes it with finesse). But gentrification and immigration are not what the play is about, which is why it’s so effective. Showing how the changing neighborhoods affect the Kim family, and seeing their interactions with each other and their customers are powerful without beating anyone over the head with the message.

That being said, it’s not a perfect play. Mrs. Kim’s (Jean Yoon) character could have been expanded. Yoon does a wonderful job and has one of the most emotional scenes, but she is defined less as an individual and more by her relationship with her husband and her son. Rosie Simon is phenomenal as Janet, the Kim’s daughter, who has a dynamic arc revolving around what she owes her family versus what she owes herself.

But the core relationship in the show is that of Mr. Kim and Jung, his estranged son. Their history at the heart of the show. It’s the reason Mr. Kim has to reevaluate the future of the store since he hasn’t spoken to his son and heir in years. It informs his dealings with Janet. But it’s more of a looming presence than anything. It’s frustrating that Janet covers so much ground with her father, but Jung and Mr. Kim’s relationship is still at the heart of the show. It feels like the women put in a lot of emotional labor from which the men reap the benefits. The culminations of everyone’s emotional arcs make sense, but it would be nice for the women to be just a bit more involved.

Overall though, Kim’s Convenience is a fantastic and timely play. Lee and Simon have incredible chemistry – their comedic timing was perfect, and their dramatic scenes stirring. Ins Choi, the playwright also plays Jung, and brings with him a lot of sincerity and sympathy. And Ronnie Rowe Jr. rounds out the cast by playing multiple roles, to which he brings a lot of charisma. The gifted cast brings to life Choi’s intelligent play. Kim’s Convenience is thoughtful, heartwarming and gut-bustingly funny all at once. See it while you can!