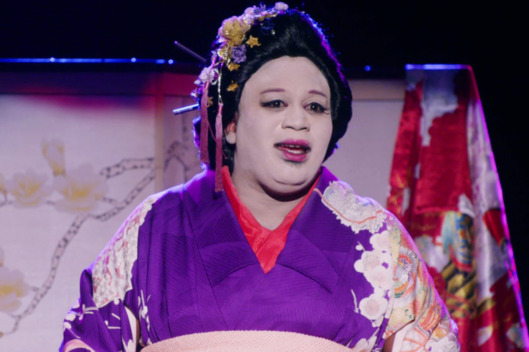 It’s been a very uncomfortable week for me as an Asian-American media consumer. It started Tuesday, with the new Doctor Strange trailer, continued Thursday as stills of Scarlett Johansson in Ghost in the Shell emerged, and concluded Saturday, when I had to stop my Unbreakable Kimmy Schmidt binge after the unbearably self-satisfied episode, “Kimmy Goes to a Play!”

I didn’t see it coming. Seriously, as an Asian, I’m used to a lack of representation, in both actors and stories. Occasionally, Hollywood does something cringe-worthy, like cast Emma Stone as “Allison Ng”, or make most of the actors (except the villains) in the Avatar the Last Airbender live-action movie white. But generally, Asian characters are pushed to the side-lines or ignored all together.

And so I don’t talk about race on this website. I try to steer clear of shows or movies that I feel are being racist (or misogynistic, but that’s a whole other thing). I don’t have time to watch shows that are being ugly. And I don’t feel like I’m the most qualified to talk about racial issues other minorities face. I try to stay in my lane and let people who know what they’re talking about dissect problematic media. And like I said, as an Asian, I’m used to being invisible. Sure, I want more representation of Asians and Asian storylines, but since there isn’t a lot of representation, most of the time, I’m trying to support other people of color. But this week, with Asian representation in the media coming up more and more, and I finally felt comfortable articulating my frustrations with how Asians are being treated by Hollywood.

It started when Marvel dropped the teaser for Doctor Strange. I think I made it until a bald Tilda Swinton showed up as some kind of guru to Benedict Cumberbatch’s Strange before I had to pause, take a couple of deep, calming breaths, then finish watching. The trailer is imbued with Southeast Asian imagery. There are some obvious temple settings, and chakras are mentioned. So why was the majority of the cast white?

And why was Tilda Swinton cast as Strange’s guru figure? She’s a respected actress, but it’s not like she’s a huge box-office draw. Superhero movies sometimes will cast respected thespians as supporting characters to give the film more of weight. But Benedict Cumberbatch, the movie’s star, is the most likely out of the cast to bring people in by name-power alone. As for using respected actors as supporting characters, Oscar nominee Chiwetel Ejiofor has that covered. So why couldn’t Doctor Strange cast an Asian actor in Swinton’s role?

And why couldn’t Hollywood cast an Asian actress as the lead in Ghost in the Shell? Ghost in the Shell was originally a Japanese manga, so in the original story, the character was, you know, Japanese. Not Scarlett Johansson, who was cast as Motoko Kusanagi. Asian actors are rarely given the chance to have leading roles in film or TV as it is, without their stories being told by white actors.

There are a lot of arguments I’ve seen online that Ghost in the Shell is a big budget movie, so they need a big name actor attached to get funding. To that, I say there are few actors who can open a film based on their name any more. Not to mention, there’s the tactic I referenced a few paragraphs ago, of studios casting big name actors in supporting roles to give their film more pull. It’s what Marvel did in Thor, when they hired then-little-known Chris Hemsworth and bolstered the cast with Anthony Hopkins and Natalie Portman in supporting roles. If Marvel hadn’t taken a chance on Chris Hemsworth, then we, society, might never have been introduced to Chris Hemsworth. And I don’t know about you, but that’s not the kind of world I want to live in.

My point is this: no, there are not any Asian actors in the United States who have the name recognition of Scarlett Johansson, but if they’re never given the chance to lead films, then that’s not going to change any time soon. Hollywood could start by casting Asian actors in roles that are inherently Asian. If financing is going to be such an issue, cast a few well-respected Caucasian actors in supporting roles (which they will do anyway).

I managed to push my frustration at Doctor Strange and Ghost in the Shell aside and decided to start watching the new season of Unbreakable Kimmy Schmidt. Thoug it wasn’t perfect (we’ll get to that in a second), I liked the first season a lot. Its relentless positivity won me over and who doesn’t want to end their week on a high note? Then I got to episode three, “Kimmy Goes to a Play!”, which felt like a slap in the face from a show I was counting on to be my happy place.

In “Kimmy Goes to a Play!”, Titus (a black man), decided to put on a one man show about his past life as Murasaki, a Japanese geisha. In response to this, a group advocating respectful portrayals of Asians in entertainment protested. The protestors were portrayed as belligerent people who were offended for the sake of being offended. “How can they criticize something they haven’t even seen?” Kimmy wanted to know. “Cause that’s what the Internet is – just anonymous hosers criticizing geniuses,” Titus replies.

There’s a difference between saying a movie sucked without ever having seen it, and saying, “that casting is offensive”. Certain racial issues are pretty clear cut. If an actor did blackface in a movie, I would not see that movie (I refuse to give it my time, my money or my attention), but not seeing the movie in question wouldn’t make my opinion that it’s horrible for featuring blackface any less right.

What’s really disappointing here is that Unbreakable Kimmy Schmidt had a chance to prove itself as an intelligent show that listens to its audience. Even though I liked season 1, I thought the decision to make Jane Krakowski’s Jacqueline a Native American woman was cringe-worthy. Having Jacqueline’s secret Native American past added absolutely nothing to the show. Whenever those storylines came up, I would always distract myself with my phone until they were done. If Jacqueline had to have a secret past, they could have either cast a Native American actress in the role, or easily changed the storyline to make more sense with Krakowski. Instead, it resorted to stereotypes , and it just wasn’t funny.

Naturally, and fairly, this storyline drew some criticism. “Kimmy Goes to a Play!” would have been a perfect opportunity to acknowledge that even if someone’s motives are pure, their actions can still hurt people. This storyline could have shown that Titus, a lovable character who wasn’t setting out to offend anyone, still hurt a group of people. It could have shown the importance of considering how marginalized groups are affected when their stories are told by outsiders. It could have been the show’s “mea culpa” for the Native American storyline. A “we’re sorry; we thought it was funny but, after hearing your feedback, realize it was actually wrong of us”.

Instead, Unbreakable Kimmy Schmidt decided to turn its critics into caricatures. “I don’t want to hear the end of anything anyone has to say,” says one of the protestors. By the end of the show, the protestors were moved by Titus’s show. They hugged him, then panicked, realizing they were no longer offended, and therefore, didn’t know what to do with themselves. Speaking as a minority, I would love to no longer feel offended. You know what I would do if all minorities started getting fair and respectful representation in the media? I would enjoy more media.

I sat through the entirety of “Kimmy Goes to a Play!” and heard what the writers had to say and disagreed with it. I hope I’m arguing against it in a fair, level-headed manner. I can’t say that they’re returning the favor. I understand being embarrassed at being called out, and the natural instinct to get defensive, especially if the internet is involved. But as a show backed by Netflix, one of the biggest platforms in the world, Unbreakable Kimmy Schmidt wields a lot of power. It should wield that power responsibly. There’s a difference between critics and haters, but it felt like “Kimmy Goes to a Play!” lumped them all into one group, then mocked them all for no real reason other than because it can.

Of course there are people out there who look for reasons to be outraged for the sake of being outraged. But minorities asking for representation in media are not among them. And they deserve better than to be turned into cartoonish figures as they were in Unbreakable Kimmy Schmidt. In the past few years, effort has been made to get more minorities on screen, but it’s not nearly enough.

I don’t think there are people in Hollywood sitting in dark rooms, rubbing their hands together and planning how to hurt minorities next. But that doesn’t change the fact that they are hurting us. With such a large audience, it’s inevitable that someone will be upset, but Hollywood could try harder to minimize that.

It’s a big world, and there is such a beautiful variety of people out there, with different skin colors, religions, sexual orientations, ages, body types, and life experiences. It makes sense to not only tell their stories, but to include them in that process. It’s not too much to ask that Hollywood listen to minorities and create content that is inclusive and doesn’t resort to stereotypes or white-washing, or doesn’t mock them for being upset. We give you our time and money, and all we’re asking for in return is respect.